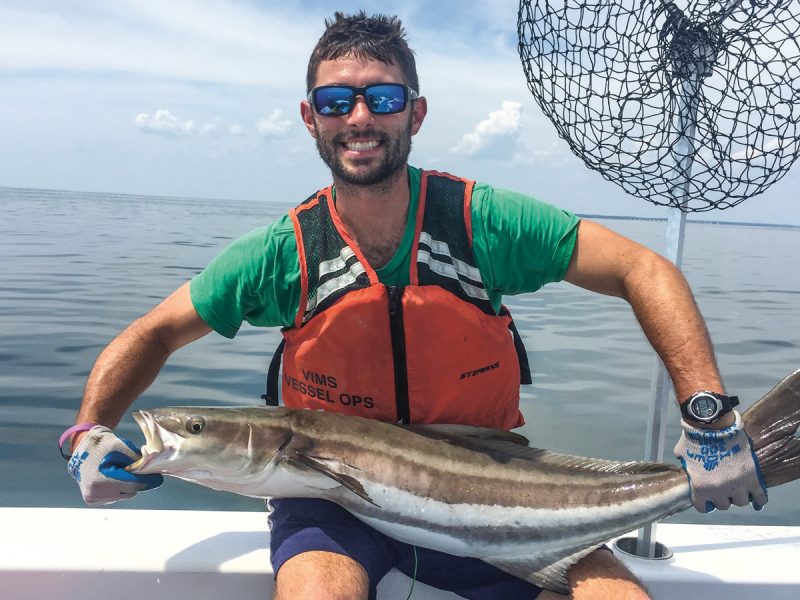 Wherever you live in the Northeast, it’s hard to ignore that southern visitors are becoming more and more of a regular occurrence in our waters each summer and fall. The coastal ocean is warming at about three times the global average, and as of this writing in July, I’ve already heard reports of Spanish mackerel in Boston Harbor, a houndfish off Nantucket, and a bull shark off Long Island’s South Shore. While it’s easy to dismiss such encounters as one-off events, fisheries scientists and modelers are finding that some southern species may become regular and predictable visitors in coming years.

Cobia, those long, lean coastal predators often mistaken for sharks as they cruise just below the surface, are one such species. Cobia along the East Coast are historically found from Florida north to Chesapeake Bay, and state harvest allocations by the Atlantic States Marine Fisheries Commission (ASMFC) reflect that fact, with only 1% of the quota allocated to all states north of Virginia combined. Recent research, however, finds that cobia will likely become a reliable summer migrant to waters off the coast of New Jersey—and even as far north as southern New England—in the coming decades. Anglers are already encountering them; just ask Len Andalis, who set a new New Jersey state record with a 90.6-pound fish he bested while fluking off Cape May last August.

“As a coastal pelagic species, cobia will likely be sensitive to changing ocean conditions, especially temperature,” explains Dr. Dan Crear, now a research associate with the National Oceanic and Atmospheric Administration (NOAA) Fisheries Highly Migratory Species Management Division, who studied cobia movements and physiology as part of his graduate work at the College of William and Mary’s Virginia Institute of Marine Science. To predict where cobia may turn up in future years, Crear and his colleagues needed to know two main things: the habitat they prefer, and where that habitat is located both now and in the future. Until recently, however, little data on the former existed for cobia along the East Coast. “Most of what we know about cobia distribution comes from where fishermen catch them, which isn’t necessarily indicative of all the places they might be at a given time,” notes Crear.

To help fill this gap, Crear and his colleagues, enlisting the help of recreational cobia fishermen in Chesapeake Bay, deployed 10 pop-up satellite archival tags (PSATs) and 50 archival data storage tags on 60 cobia caught with rod and reel (mainly sight-fishing with bucktails) from 2016 to 2018. Both of these tag types provided valuable depth and temperature data to indicate the habitat the fish prefer. While more expensive, PSATs have the advantage of not requiring the fish to be recaptured to obtain the data; after the tag’s scheduled deployment time (six months in this case), it pops off the fish, floats to the surface, and transmits the data via satellite. The data storage tags are cheaper and provide more detailed habitat data, but they must be physically recovered—that is, a fisherman has to harvest the fish and send the tag back to the research team. Overall, seven of the PSATs reported and eight of the data storage tags were recovered, giving the team habitat-use data for 15 fish that were at large from 55 to 406 days.

To understand the preferred habitat of the tagged fish, Crear and his team acquired daily temperature-at-depth data for the Northeast continental shelf region during the time period that the fish were at liberty. They used this information, combined with the tag data, to develop what’s called a “habitat suitability model”: If fish occupied a certain temperature in a greater proportion than what occurred in the environment, the researchers considered it suitable habitat. Since the researchers had temperature-at-depth data from the tags, they could predict habitat suitability not just at the surface for a given area but throughout the water column. While the tags from the 15 cobia didn’t provide location data, a separate cobia study happening at the same time deployed 31 acoustic tags on fish, which regularly “ping” and whose locations could be detected using numerous moored receivers (listening stations) up and down the coast. The locations of those 31 fish, evidenced from their “pings,’ matched up with the suitable habitat Crear and his colleagues identified, thus validating the model.

“Our next step,” Crear explained, “was to apply our habitat suitability model to predicted ocean conditions over the next 80 years using the ‘business-as-usual’ greenhouse gas emissions scenario from the Intergovernment Panel on Climate Change.” The future temperature-at-depth data they used were provided by the NOAA Geophysical Fluid Dynamics Laboratory (GFDL).

Coming Soon To A Fluke Rig Near You

The researchers found that, during the cold winter months, cobia are likely to largely maintain their current distribution from North Carolina south. Moving into the future, however, they expect to see a gradual creep northward in their typical summer range, with pockets of suitable habitat cropping up at far north as Cape Cod. About 40 years from now, their model predicts that waters off New Jersey’s coast will have the highest percentage of suitable habitat of any state during the summer months—about 35 percent! Connecticut and New York will comprise another 10%, meaning that nearly half of suitable habitat could be north of New Jersey during the summer. Contrast that with today, when Virginia and North Carolina waters account for a similar proportion of suitable summertime habitat. It’s worth noting that, in the Northeast, the model predicted that cobia could be distributed from the shoreline to the Gulf Stream, making an encounter while tossing an eel from the beach, bouncing a fluke rig, or trolling a spreader bar for tuna all within the realm of possibility.

So, you may think, “This model is predicting conditions in 40 years, and I won’t be seeing changes anytime soon.” It’s important to remember, however, that the model is looking at average conditions, and that uncharacteristically warm years, which are becoming more common, can bring conditions similar to a projected mid-to-late century average year. “We’ve had extremely warm years in recent memory that roughly simulate what our waters could look like in 40 years,” said Crear. “Take 2012, the year of the ‘ocean heat wave,’ when we saw all sorts of subtropical species, including cobia, invade Northeast waters in unprecedented numbers. We applied our model to 2012 and found in that year, 27 percent of suitable cobia habitat was in fact off New Jersey’s coast.”

The Big Picture: Toward a New Management Approach?

“Overall, it appears that cobia are going to be a climate-change winner, at least for the next century,” Crear said. In addition to broadening their habitat reach northward, they may also add new spawning grounds in Delaware Bay, the New York Bight, and Long Island Sound. Their potential shift does, however, present a challenge for ASMFC managers given the current lack of harvest allocation to states north of Virginia. One potential solution for that challenge could be a dynamic management approach, which leverages the predictive abilities of this model to adjust annual harvest allocations based on forecasted cobia distributions from year to year. Moving forward, these kinds of predictive models could be used to better align management strategies with fish distribution not only for cobia, but for other migratory species whose movements are strongly tied to temperature or other environmental cues.
In the meantime, if you’re cruising coastal waters off New York or New Jersey during the summertime, it’s best to keep a bucktail with a stout hook rigged and ready just in case you spy a big brown torpedo cruising across your bow.