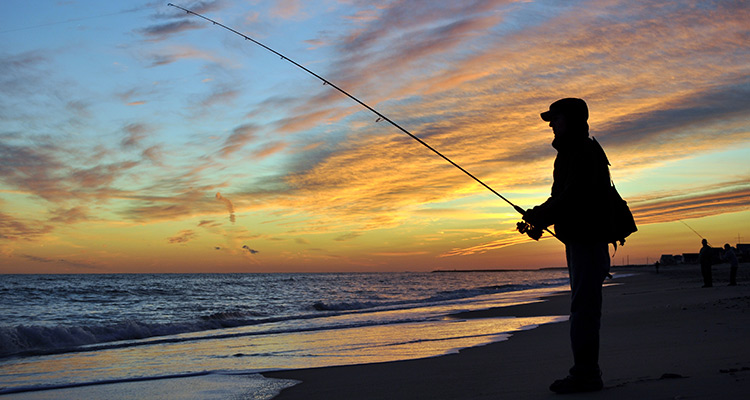 By mid-May, I shift my search for striped bass from the back bays to the beaches, because out front, large migratory stripers will be working their way north. It’s time to hit the surf and break out the heavy gear—this is what we have been waiting for all winter long!

New Jersey surfcasters get two separate three- to six-week-long opportunities to catch these big stripers, one in the spring and another in the fall. For the most part, the best shots at these big migratory stripers are during the nighttime tides. There are a couple of exceptions, and big bass can be caught during the day, but over the last three decades I have found my better fish late at night.

Before you even tie a plug to your leader, spend some time scouting out the most likely places where stripers will move in to feed after dark. We are all familiar with structure such as bridge pilings, docks, and jetties, but on the open sandy beaches where such structures don’t exist, I shift my focus to “soft structure.”

Soft Structure
Shifting sands on ocean beaches form ambush points for stripers that surfcasters refer to as “soft structure.” Unlike a jetty or other hard structure, soft structure is not immediately apparent. A daytime stroll at low tide will reveal any structure in the area. Listed below are some of the most productive structures for sandy beach striper fishing.

BOWL: A large break in the sandbar will scoop out a large hole right next to the beach where baitfish and stripers will pile up. Bowls are the rarest of the soft structures, but they are also the most productive.

CUT: Baitfish and stripers funnel through cuts in the sandbar as they move in and out with the tide. Cuts appear as slack water between the waves breaking over the sandbar.

TROUGH: The deep water between the sandbar and the beach is a prime place to find stripers—especially when an onshore wind has waves crashing over the sandbar, sending baitfish and crabs tumbling into the trough.

By soft structure, I’m referring to white water breaking over a sandbar, a cut in the middle of a sandbar, or the deep trough between the beach and a sandbar. Areas where current flows in or out of the troughs next to the beach will attract stripers, especially those close to an inlet, where the current will be even stronger.

Soft structure creates ambush points where striped bass lie in wait for unsuspecting baitfish. The bass seek out areas where they can feed without expending undue energy, areas such as the choke points created by cuts in the sandbar where baitfish are funneled right past them.

Springtime: Gear Up for Distance

When fishing soft structure in the springtime, most (if not all) strikes come at the very end or the cast, after just three or four turns of the reel handle. So, the best way to reach these fish is to have a surf combo capable of casting long distances and a lure that will fly through the air with little resistance.

For your rod and reel combo, err on the heavier side, as stripers between 20 and 40 pounds are a real possibility during the spring, with an outside shot at a 45- or 50-pounder. A light but powerful rod from 10 to 11 feet in length with a lure rating of 1 to 4 ounces will fit the bill. There are some very good custom and factory rods on the market these days that are lightweight enough to fish an entire tide without getting fatigued and strong enough to land that fish of a lifetime. Add a matching size reel spooled with some backing and at least 200 yards of braided line – I use an 11-foot CTS Vapor Trail with a Penn Torque 5.

Another way to get some extra distance is to wade well into the surf to get those extra 10 to 20 yards that can make all the difference. To do this, wear a good waterproof surf top and waders with a tightly secured wading belt. It also helps to have a decent quality surf bag to carry your plugs, pliers and miscellaneous items so you don’t have to keep heading back to the beach. And, don’t forget a head lamp or neck light. At times, you will get wet and take a pounding by the waves, so it’s best to be well prepared to stay dry and to use equipment that can handle the harsh saltwater environment tide after tide.

A couple of must-have plugs for the spring are the Daiwa Salt Pro Minnow and a darter like a Beachmaster or Super Strike. Both types cast well and swim sub-surface, but each has a different action. The Daiwa SP Minnow has a straight, tight wiggle while the darter will swim with a wider left-to-right motion.

I like to work my plugs with a steady, very slow retrieve, as I want to feel that plug working. I always keep my concentration level very high after every cast, anticipating the strike, which I think is one of the keys to surfcasting success.

When fishing early mornings, always carry some topwater plugs, like a pencil or Polaris-style popper. There is nothing like seeing a striped Bass or bluefish attack your offering on the surface.

Fall: Fish Near And Far

Come fall, the game stays the same but with a few minor adjustments. First, you may not need that 11-foot rod; a shorter 10- or even a 9-footer will do. You will still have to wade out to the sandbars, but during the fall migration you will find more fish in close because baitfish such as sand eels and peanut bunker tend to hold tighter to the beach.

During this time of the year, I like to use a teaser in front of my lure. Once again, the Daiwa SP Minnow is a great choice, but also a needlefish is very hard for bass to resist after dark. Around first light, a metal lure like the A.O.K. T-Hex will reach and tempt any fish that may be swirling and breaking on the surface.

Whether it’s spring or fall, spend some time “reading” the beach you like to fish, then take what you observe and apply your presentations there after dark. The Striped Ones are waiting…

Finally, don’t forget to practice catch and release with the large stripers. A great photo will last a lifetime and ensure that these wonderful gamefish will be around for us and future generations to enjoy.