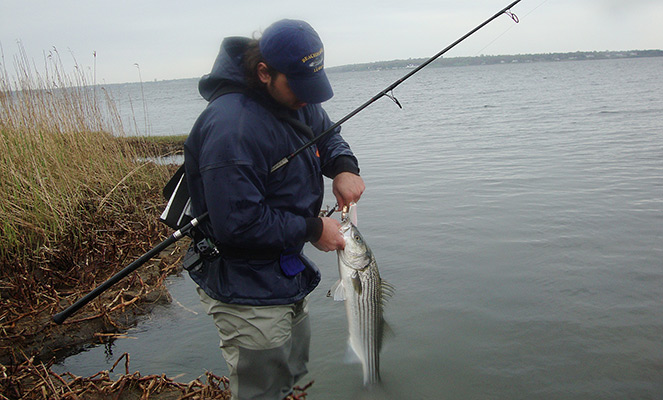 Change your approach to early-season surfcasting to find more fish and fewer crowds.

From mid-April into early May, small striped bass ranging in size from 10 to 18 inches or so begin swimming along the shores of southern New England. After a long, cold winter, these bass are a welcome sight, regardless of size. Most fishermen are happy just to be wetting a line and shooting the breeze with fellow anglers and friends. Yes, some do partake in the “holdover” striper fishing that can be good through the winter in freshwater rivers, however, for most of us, the ocean-run fish are what we wait for. Thankfully, by mid-April the wait is over as another season begins.

In the early spring, beachfronts and jetties that see an annual influx of small stripers will also play host to crowds of anglers vying for their shot at a linesider. The bass visit these spots as if they were stopping on some type of freeway rest station after having been guided there by internal GPS waypoints imprinted on their DNA. Like the bass, anglers too begin to pattern these annual phenomena and know what time of day, tide stage, wind condition and water temperature will trigger the arrival of the stripers.

Most early-season anglers are armed with cookie-cutter “schoolie” outfits, which consist of 6- to 8-foot light-action rods paired with small light-tackle reels and light jigs. Anglers targeting fish of this size generally use some type of small rubber bait such as the Cocahoe Minnow or Storm Wildeye Shad in the 3- or 4-inch size. Other favorites are Fin-S Fish and small bucktail jigs. Some anglers even use small teaser flies above the jig in anticipation of a double hook-up. All of these baits will produce fish consistently all year, but they are especially productive during the spring migration, when small bass are feeding on the small bait that is available along the beaches.

As surfcasting gains popularity each year, the sport brings more anglers to these early-season hotspots. As soon as reports of the first stripers flood in, these beaches and jetties soon become crowded, and the solitude of spring fishing soon becomes a distant memory.

I still make my yearly pilgrimage to the shore-side schoolie hotspots every spring, but as the crowd thickens, I bow out. There are many locations in inlets and bays that provide some welcome solitude as well as phenomenal fishing. While many fishermen are picking away at miniature-sized bass along the beaches, others are already catching keepers in the backwaters.

Having grown up close to the shore of upper Narragansett Bay, I have been able to access some great early-spring fishing, but only in recent years have I found out just how early this fishing begins. When catching schoolie stripers down along the beaches and jetties of Rhode Island no longer seemed worth the effort of jockeying for position on a rock and tangling lines with other fishermen, I decided to take a crack at fishing some of my favorite Upper Bay spots that I have been fishing since I was very young. What better place to fish than somewhere I already knew? The first trip down in late April was a little daunting. I knew there were guys catching bass at the usual spring spots, and I remember wondering, “What am I doing here fishing this lifeless water?” My answer came when a schoolie bass exploded on a pencil popper I was working over the surface. I almost jumped out of my waders because I had no expectation of seeing any action that day.

I continued my efforts throughout the month, focusing on subtle changes to lures and gear. Normally, I would have been using small rubber baits, but now I was using much larger plugs, mainly topwater plugs, such as spooks and pencil poppers. These fish seemed to be much more aggressive and willing to hit larger baits. I started to think about why these fish were here so early and why were they hitting plugs that I usually kept packed away for another month or so. The answer was swimming by right in front of me: river herring. The presence of larger baitfish in the area allowed me to use much larger artificials than would typically work this time of year.

In recent years there has been a big push for the conservation of the river-run herring. New fish ladders are being constructed up and down the coast, and a moratorium on recreational harvest was placed on the fish in several New England states in 2006. Rhode Island has herring runs all over the state, but most of them are in the upper reaches of the bay and its estuaries. Some no longer receive the numbers of yesteryear, while others do not see any herring at all anymore. But bass love herring, and they can sniff them out anywhere. Many of the rivers hold the greatest numbers of herring in May, but there are often fish trickling in throughout April. Some herring runs that have not seen the fish in years are now beginning to have countable stock returning, which translates into better early-spring fishing in the surrounding bays.

After my initial trip, nothing was set in stone from my point of view. Although I figured that where there were a few fish, there were bound to be more. I opted to roll the dice again and began moving around to spots that I knew had fish later in the year. To my surprise, I was rewarded for my early efforts. Not only was I catching fish, but I was catching fish of some real quality. Some of which were even weighing in the upper teens.

There are a few points to consider that will really help in locating these fish. These are things I have found to be successful in my home waters but may vary with location and preferred angling style.

Any realtor will tell you, location is everything. The same goes for fishing. Reading back bays can be tricky at first because there is rarely any obvious structure that jumps out and says, “I’m holding fish.” When reading the shoreline of an inlet or bay area, subtle changes make all the difference. I usually look for steeper than normal drops from the shore into the beach. I also look for transition from sand to rock along a shoreline at low water. These spots are generally covered during periods of very high tides and provide some cover and foraging area opportunities for bass. Remember, a little cover goes a long way. I also look for points that jut out into the water. These points are usually good indicators of either small rocky outcroppings or sandbars. Both scenarios tend to be good places for bass to be lying in wait.

As the tide ebbs and flows over the bar, casting into the lee of the current can produce strikes from bass that are ambushing bait as it swims over the bar. Weed and marsh flats also hold bass in the early spring. As eel grass begins to grow, it shelters many different types of forage for the bass. Grass shrimp, crabs, silversides and mummichogs are just a few of the many species bass feed on that find refuge along these grassy flats.

Last, but certainly not least, are tributaries and their surrounding areas that will likely see a herring run in the early spring. These areas can be very consistent. Bass tend to arrive shortly after the arrival of anadromous baitfish species such as the herring. Though not always visible, the presence of herring will surely make your outing worth it if the right artificials are employed.

I tend to shy away from vulcanized artificials when I am fishing in these reaches of the Upper Bay. Baitfish are readily available and the bass here tend to be a little more aggressive than their oceanfront cousins. As far as plug choice goes, I am never without a variety of Danny-style plugs ranging from 4½ to 7½ inches, made by Tattoo, Beachmaster and other plug builders. Don’t be afraid to toss the larger varieties, especially when there is some chop on the water; even small fish will crash these plugs if there is larger bait present. Next on the agenda is spook-type plugs. These plugs have a great side-to-side gliding action that can entice even the most finicky bass. When it comes to spooks, there is the original Heddon Zara Spook, the Tattoo Sea Pup, and the Rebel Jumpin’ Minnow, just to name a few. There are many builders out there that produce effective spook-style baits. I favor plugs that stay on or very near the surface and push water rather than splash it. The splashing I leave to my final plug of choice, the pencil popper.

Pencil poppers are deadly. If you are fishing any time of year, you would be remiss if you weren’t carrying at least one or two of these in your bag. Many builders make great pencil poppers, including Gibbs, Afterhours, Cotton Cordell, Beachmaster and Lordship Lures. For the most part, I opt for Gibbs for two reasons; one, they are readily available in sizes ranging from ½- to 3 ½ ounces in all colors, and two, Gibbs has been making pencil poppers for longer than I have been alive, and they have it pretty well figured out in my opinion.

When fishing in the spring, I go with pencils ranging from 1 to 2 ounces, and my colors of choice are all-white or parrot, depending on water clarity. The erratic splashing and commotion produced by the pencil popper draws bass in from the surrounding area and they crash this plug fiercely. I use between an 8- or 9-foot surf rod paired with a spinning reel, typically my Van Staal 150 or 200. Some may think the 9-foot rod is overkill for this type of fishing, but when I want to toss a really big Danny plug or pencil popper, this rod provides me with enough power to punch a larger plug through a stiff wind without being unwieldy.
I use a 30-pound-test shock leader tied with a barrel swivel and quick snap to facilitate plug changes.

Time of Day And Tide

I tend to fish higher tides in the late afternoon when fishing the early spring. This is for two reasons. One, I generally can’t fish a very early high tide because of my job, and two, higher late afternoon and evening tides provide the best combination of water height and darkness that encourages the fish to move closer to the shoreline. Overcast days allow me to get out a little earlier and fish a greater portion of the later stages on the incoming and early outgoing tides, with the latter being the best. When it’s gray and grumpy, go fishing!

In general, while surfcasting from the beaches of the bay, one is rarely casting into depths of more than 8 to 10 feet, with the higher and lower water levels occurring around the new and full moon phases.

Higher tides will bring fish closer to you when fishing off the beach. One exception to my rule is fishing sandbars. I prefer to fish sandbars later in the dropping tide because this allows me to reach deeper troughs off the beach that hold waiting stripers. With the tide moving, bait tends to move as well. Therefore, these are the best times to catch your early spring keepers.