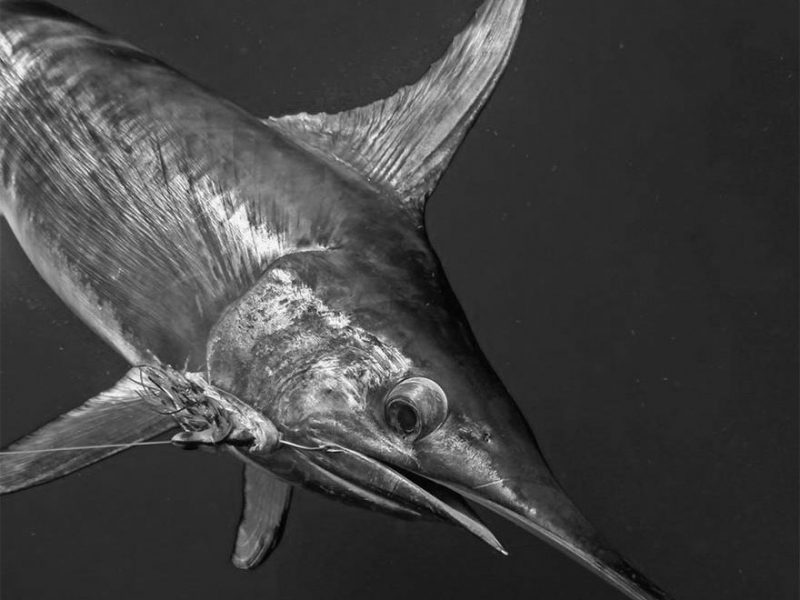 Anybody who tells you they have never been seasick simply hasn’t been in rough enough seas. As a hardened salt, I’ve never actually been seasick before. Sure, I’ve felt queasy in 6- to 8-footers with diesel fumes spewing into my face, but never had I dry heaved or vomited. That is, until an October canyon trip with Captain Mike Bogan in 2007 aboard the Gambler out of Point Pleasant.

The always-reliable forecasters at NOAA called for 4- to 6-foot seas from the east. With beers and a couple of Wawa hoagies in hand on the 5-hour ride out to Hudson Canyon, everything looked fine until about 50 miles from shore when the fan turned on. Napping fishermen began to hit their heads on the bunk tops with every passing swell chop, and mumblings started about what was happening outside.

A giant heave began to show with whitecapped waves. Captain Mike finally set anchor 75 miles out and, not long after (around midnight), the weather got downright nautical. 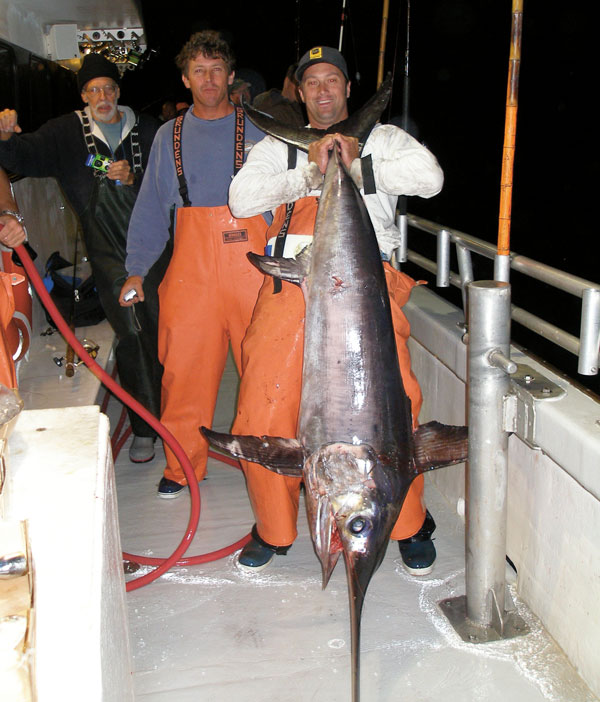 What had been a pretty big swell turned into a growling ocean spewing out demon seas in 40-knot winds.

“Mike, how big are these seas?” I asked.

“I’ve been in rough stuff, and these are 20 to 24 feet. I can’t believe they screwed up the forecast this much,” he exclaimed.

Captain Mike then told us we were in it for the long haul. Even in a 90-foot super cruiser, he couldn’t pull anchor and risk going broadside, so here we were, taking monster swells over the bow that smacked the pilothouse and drenched the stern. It was then that I realized only four of us were vertical out of all the fares—the rest were horizontal in bunks.

Though the cobalt-blue water may be in the high 60s or 70s, October nights in the canyons can get downright chilly. Staying warm and dry will keep you comfortable at the rail and make sure your bait is in the water when the tuna charge the boat.

Many offshore trips stop at high-fliers to cast for mahi, and having a medium-action spinning rod, like the St. Croix Mojo Salt MSWS76MF allows fishermen to launch plugs and jigs to the structure to pick off multiple mahi on each pass.
If you’re going to keep your eyelids from closing during the midwatch aboard a headboat, you’ll need a steady supply of hot, high-test coffee at the ready. Before boarding, fill up a big insulated container like the Yeti Rambler Half Gallon Jug to keep your coffee hot deep into the night, and keep you and your crew alert enough to realize when a swordfish has taken your bait and run for the surface.
Though the mates are there to assist with tangles, rigging, and unhooking fish, having a reliable set of pliers, like the Bubba Blade Fishing Pliers on your belt is prudent.
A top layer like the windproof and water-resistant Grundens Midway Hooded Softshell Jacket tailored from four-way stretch fabric allows for comfortable movement and protects against the cold, wind and damp of a fall night in the canyons.
Keep the butterfish chunks, tuna slime, and salt spray off your clothes with a set of medium-weight bibs like the Grundens Clipper 116 Commercial Fishing Bib Pants. Tailored for an active fit, the Clipper allows for a full range of motion whether jigging, or following a big hooked tuna as it runs around the boat.

There was no turning back, so my crew of Dave Deg, Sean Reilly and Chris Lido decided we might as well fish. Mate John Chevarini got the chum slick flowing, intermittently ladling out a soup-can full of bunker chunks and juice that got caught in the wind and plastered the deck. We all sent down live squid baits, standing with our knees planted into the rail to avoid going overboard. I got to midships with a live squid and watched Lido hook up with a 50-pound yellowfin. “Now we’re talkin’!” I thought to myself.

That tuna got the juices flowing in a good way, but then all of a sudden, I got queasy, really queasy. I stood at the rail in one of those moments where your body isn’t doing what your mind wants it to, and you kind of roll with the swells, up and down, taking the punches.

I began to steel myself and just when I thought I had beat the queasy feeling, Lido came over and told me about a deer he shot the day before. He offered me a pretty raw “doeburger” with a wet, soggy bun. It was offered with good intentions, but the moment I saw the sandwich I began to heave over the side, then dry heaved, still with rod in hand.

After 10 or 15 minutes of vacating everything from my stomach, I wiped my chin with my sleeve. I thought I had beaten it for a second time when the pukes came on again, followed by those ugly gut-wrenching dry heaves. When no fish were being reeled in, it got worse, and I could only laugh at myself. I’d drink a gulp of water from the bottle and say to my friends, “Count down from ten to see how long I hold this down.” I never got past six. I did that a few times to get some laughs, then the last time they counted again and got to eight, but we were interrupted when my rod went off big time.

The Tiagra 50 Wide smoked line off with the clicker singing. In an instant, my seasickness was gone. Adrenaline started coursing through my veins, instantly eliminating my nausea. I jammed my knees into the gunwales and attempted to battle whatever was on the end of the line. 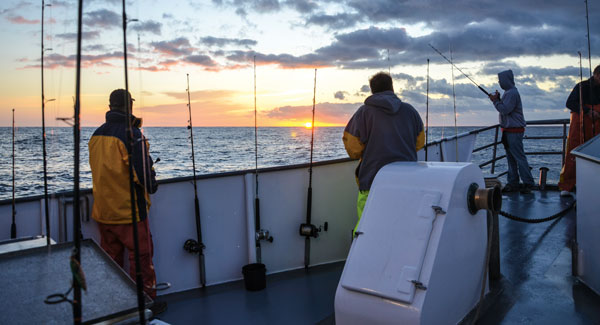 The fish ran from the bow to the stern, and since nobody was at the rail I had no problem getting down the deck to chase it around the boat, port to starboard, three times around. After a 30-minute battle, I still I didn’t know what I had on the line. The beast took me to the port side of the boat, then in a split second, it ran right under the hull, about to be cut off. I thought the game was over, but on the other side of the boat, Sean saw a massive behemoth breach the water and shake its bill in the whitewater. “Swordfish!” yelled Sean.

Unfortunately, my line was under the boat and tangled up in the prop shaft. That’s when Chevarini shouted out over the howling winds, “Back off the drag!” I did as I was told, and Chev pulled a few yards of line out of the rod tip while on the other side of the boat Sean gaffed the line connected to the sword and then held the line with his bare hands. In an instant, Chev cut the line at the end of my rod, then I stumbled over with the stand-up rod and reel, following him to the starboard side. I kept falling from the gigantic swells as I worked my way to where Sean was holding the line in his hands with the sword still attached. In a lucky instant, Chev took the line from Sean’s hand and somehow tied a blood knot with the two loose pieces of monofilament. The moment he licked the knot and pulled it tight, the line shot out of his hands as the sword made a blistering run.

I followed, knees buckling and arms shaking, down the entire starboard side of the Gambler back to the stern again and then started the real battle. Up and down, up and down, white water coming over the bow and spraying over the cabin and into the stern, which was 90 feet back. As I battled for another 45 minutes, we finally saw the huge eye, black and cold – not lifeless as Quint said of the shark in Jaws, but full of energy and vigor.

I knew we only had one shot at the fish. As I managed to crank the reel with the last of my strength to get it to the side of the boat, I backed off the drag, and Sean and Chev sunk two gaffs into the fish—but the swells were so large there was barely enough of the 10-foot bamboo gaff to hold onto! Seeing that, I dropped the rod into the holder, grabbed the third gaff and sunk it into the sword’s body. 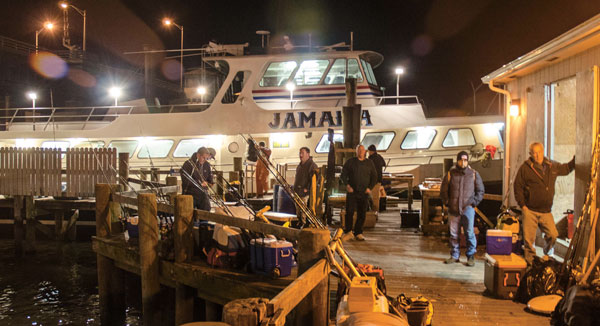 October is offshore season for Northeast headboats. Captains from Cape May to Cape Cod will be looking for weather windows to make the long run to the edge of the continental shelf. Most of these trips are 18 to 24 hours, with some boats offering extended trips of 36 to 48 hours. Longer trips usually provide the time to catch a variety of species such as mahi-mahi and tilefish, though the main target is tuna.
A few headboats mix in some trolling, but for the most part, chumming and chunking is the name of the game. Most fishermen feed cut pieces of butterfish or sardine into the chum slick, hoping to fool the tuna that are fattening up on the free food. When available, live squid can be the best bait, especially at night when they are drawn to the lights of the boat. In the daylight, chunks work better.
Fishermen can also catch using jigs, both metal and soft plastic, but must be careful not to interfere with those chunking bait. On most trips, there are a few fishermen jigging toward the bow or on the up-current side of the boat.

All three of us timed the huge swells, coordinating their drops and counting to three, each time trying to heave the sword over the side. On the third attempt to lift it, the bill and head broke over the rail, clanging like a gong as the sword struck the metal. It was all or nothing now. “Pull! Pull!” every one of us shouted. In a last-ditch rush of adrenaline between three of us, the fish came over the rail and on to the deck, flopping and thrashing as we fell and slid on the next huge swell. A 180-pound swordfish! Nobody on the boat except the five us knew of the battle that transpired that night.

Our crew then proceeded to land another five yellowfin in the messy conditions, and when the sun broke the horizon, the monstrous swells had diminished to 10- to 15-footers, still with nobody awake but we few fools who ultimately beat not only mal de mar but my first swordfish in the Hudson Canyon.

This wasn’t just my swordfish – it was all of ours, the men who stuck it out to get the job done. Captain Mike, Dave, Lido, Sean, Chev, and me. Nobody else on the boat knew what happened until we chugged into the dock at 6am as the first signs of other humans began to stir and saw Chev steaking the tuna and swordfish. Seasickness and 24-foot seas put a world of hurt on me, but it didn’t beat me. When I finally reached home, I slept like a hibernating bear for 24 hours straight, with the cut bill of the swordfish by my side in bed.