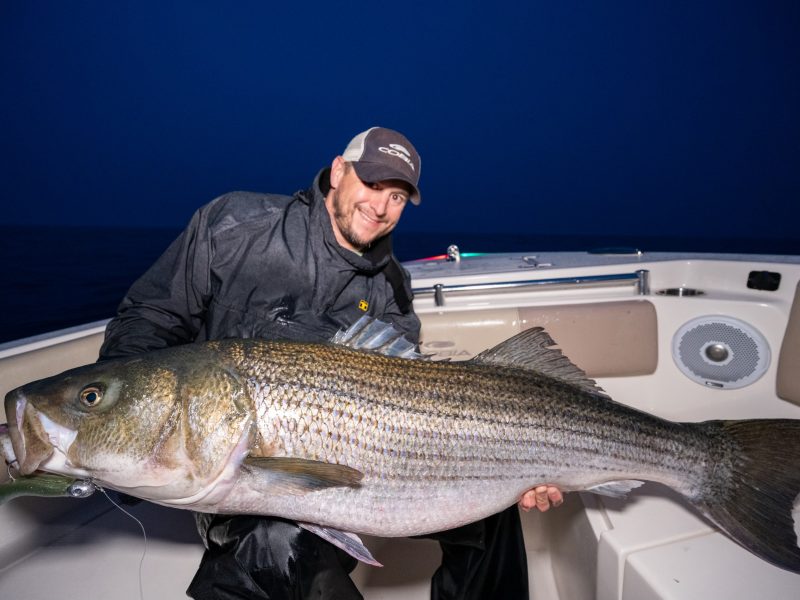 Joe D’Agostino with his personal best striper he caught on a 12.5-inch Patriot Fish.

Inspiration comes in various forms, and for lure maker Joe D’Agostino of JoeBaggs Tackle, it came from a friend and veteran charter captain Joe Diorio. “Hey, can you make a bigger Patriot Fish?” asked Diorio, who fishes for trophy stripers at Block Island.

After toying with the idea, JoeBaggs sunk his teeth into a 12.5-inch version of the Patriot Fish in 2021, designing it specifically for when big bass are feeding on large baits like bunker and mackerel.

“It’s good to have a Patriot Fish in your bag at all times,” said JoeBaggs, who’s created a lineup of tackle (over 25 different kinds) including a 14.5-inch eel bait for striper fishing, tautog jigs, a minnow plug called the Swarter, and resin jigs for false albacore and bottom fish.

When fishing on Southwest Reef at Block Island, any fish could be a personal best, but it could also exceed 70 pounds. JoeBaggs notices the stripers at Block Island hug the giant car-sized boulders on the bottom, where the bass can ambush baitfish. “The 30- 40- and 50-pound stripers are on the bottom,” JoeBaggs said, after landing his personal best striper this year on a 12.5-inch Patriot Fish.

How to Fish the 12.5-Inch Patriot Fish

“I prefer a paddle tail. I always have,” he says, while we talk about fishing the fabled waters of Block Island in July and August for trophy bass. Live eels were once the most popular bait for trophy bass at Block Island, but over the past couple of years, soft plastics have become the hot ticket.

“When a live eel dives, two things are going to happen: you feel the eel flutter to the bottom and the eel either avoids the bass, or the fish is going to swallow the eel.” He highlights the advantage the Patriot Fish has over a live eel or bunker. The Patriot Fish can’t swim away from a striper, which makes it an easy target for bass looking up at it from the bottom.

Another advantage to soft plastics is the hookset. It’s not uncommon for an eel to slide up the shank and cover the point of the circle hook, fouling the hookset because the point never penetrates the thick jaw of the bass. When fishing with the Patriot Fish on an 8/0 Soft Plastic Jig, the point and shank of the SPJ will always be exposed, ensuring the hook gets firmly buried in the thick jaw cartilage.

The simplicity factor also gives the Patriot Fish an edge over an eel. It’s easy to thread a Patriot Fish on an 8/0 SPJ and they can last up to 10 to 12 battles because the plastic is durable and stretches. And the best part is you don’t have to discard the live eel and thread another one on the hook.

Since the Patriot Fish has a paddle tail, it’s a slower sinking bait, making it easier to control and keep in the strike zone for an extended period of time. With a bit of water resistance, the tail of the Patriot Fish kicks and thumps, giving off vibrations as it flutters through the water, causing large bass to take notice of the bait.

When fishing in deeper waters like Block Island, he pairs the Patriot Fish with a 1-to-3 ounce SPJ jig to keep the bait within 1 to 5 feet of the bottom, depending on the tide. During a new or full moon cycle when the tide is peaking, a heavier SPJ will be needed. 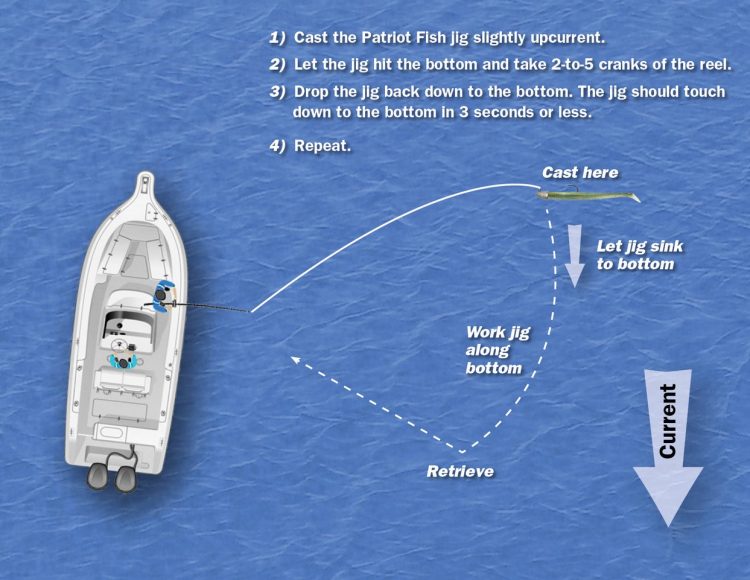 Casting and retrieving the Patriot Fish perpendicular to the boat will allow you to cover more ground in comparison to traditional bait fishing.“If you’re drifting North and South, I like to cast east and west,” says JoeBaggs. “And the reason for that is because the boat is drifting with the braided line and you’re covering ground going with the current.”

Working a paddle tail at night can be difficult, but the key is learning how fast to crank your reel in relation to the drift speed, JoeBaggs says. But when you do hook up with a trophy bass on a Patriot Fish, the strikes are violent and nearly pull the rod out of your hand, according to Capt. Diorio. JoeBaggs added that if you’re retrieving the Patriot Fish against the current, you’re going to want to step up the weight of the jig.

There are also times where JoeBaggs prefers to cast the bait up current and let it naturally swing down with the tide. When you cast up current, make sure there is zero slack in the line. If there’s slack, the bass will hit the strike the bait and you’ll never feel the hit.

JoeBaggs recently released the 14.5-inch Block Island Eel, a soft plastic stickbait intended for large stripers. The Block Island Eel has a natural side-to-side action and sinks faster than the Patriot Fish because it doesn’t have added resistance of a paddle tail. Like the Patriot Fish, it cinches down to the SPJ and holds the bait in place because of the well-designed collar. It’s available in 4 different colors: pink, black flake (pictured below), sandeel/olive, and white.