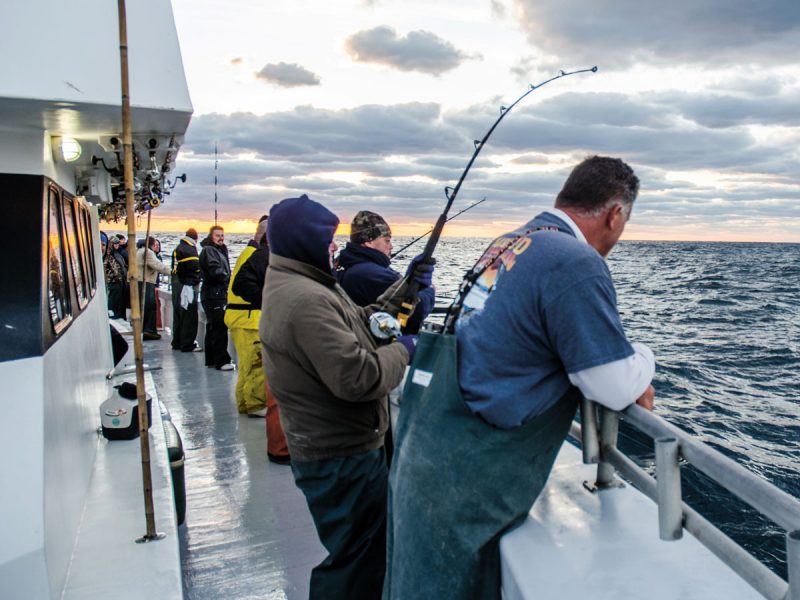 Pictured above: Last-light yellowfin on the line.

I think it’s the ability to “fish how you want” that makes party boats my favorite platform for fishing the canyons.

Want to drop a jig for tuna? Knock yourself out.

Send a disco ball and bait deep for swords? Go for it.

Spend the entire trip jigging squid? Whatever floats your boat.

As long as you aren’t actively impeding the other anglers on board, you can fish the canyons however you want (except for trolling) when aboard a headboat. And, that’s what I like.

Don’t get me wrong, seizing the rare invite to the canyons and seeing tuna explode in a trolling spread is one of the finest kinds of fishing. But, on those occasions, I do none of the spooling, rigging, or lure selecting—I’m just the dude being handed a rod to reel in every third or fourth fish. That’s great, but I think every fisherman will agree that the more involved you are in the catching process, the more satisfying the catch. And, for me at least, as someone who visits the canyons once a year in a good year, the more “involved” I am in the catching process, the less certain is a positive outcome. That, too, adds a little extra zest to the fishing.

For instance, take my last offshore headboat trip. The fishing on the edge had been tough, so the captain stopped at a “midshore” spot, where the bluefin had been thick, to land the boat’s limit before continuing east. I started with chunks, like everyone else, but the spinning rod I’d brought for mahi beckoned as I saw the 28- to 30-inch bluefin zipping around the boat. I put on a larger soft plastic and underhanded a cast as far from the boat as possible and began jigging it back. The strike came on that first cast. Just as I realized this tuna was in a different size class, the butt section of the overburdened spinning rod broke, followed quickly by the uni-to-uni knot I’d tied with mahi in mind. Broken rod in hand, line undulating weightlessly in the wind, I was disappointed, but still thrilled that my decision to switch tactics had tempted a larger fish.

Redemption came later that night in the canyons. Fishing had been brutally slow, with just a short swordfish being caught by a fisherman who had fallen asleep next to his rod. I’d been dutifully chunking, paying out line so that my half-butterfish drifted alongside the freebies being doled out by the mates. Seeing the short swordfish taken and hearing stories of these fish succumbing to jigs intended for tuna, I grabbed my heavier spinning setup, one I’d bought to cast to much larger bluefin, and attached a 10-inch white RonZ that, to me, looked pretty squid-like.

Few fishermen remained at the rail, with most opting to get a little shuteye in anticipation of a first light bite. I flipped the RonZ a short distance from the boat and let it fall. And fall. And fall. With a third of my spool out, the bait stopped. Knowing I didn’t have nearly enough line to touch bottom, I flipped the bail, set the hook, and felt brief resistance. “I just got bit!” I shouted to my friend Jerry down the rail. I began working the bait with slow sweeps when it was hit, and missed, again. On the third hit, the hook found its mark, only it wasn’t a swordfish but a 60-pound yellowfin.

The tailbeat of that fish on deck acted like an alarm clock to the snoozing anglers who assembled at the rail. My third drop with the RonZ got bit again, and this time, it was a big longfin that circled into gaff range.

Many headboats will be headed to the canyons this month since October is prime season for overnight trips to the edge. You can bring your own gear or rent a suitable outfit on board. You can pack a bag of tricks that might give you an edge or ask the mates to rig you up (they are out there every day, after all). However you end up fishing, I promise you, feeling the tuna bite while you hold a rod at the rail will beat grabbing a bent trolling rod from a rod holder every single time.