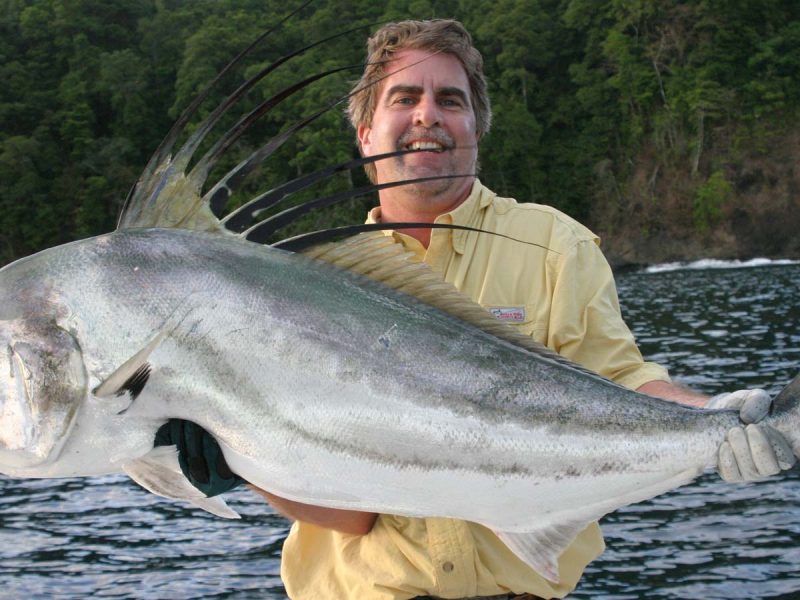 The blast of 85-degree air was welcomed by our group of anglers disembarking from Copa Airline flight 312 in Panama City, happily leaving behind a particularly harsh, cold New England winter. The first leg of our trek to Pesca Panama was complete, and following an overnight stay at the Veneto Hotel and Casino in Panama City, we would board an Air Panama flight to the northern Panama city of David. There, the Pesca Panama staff was waiting to whisk us off to the 26-foot center consoles that would be our fishing platforms for the week.

After a short run up the river and into the gulf of Chiriqui, we arrived at our home for the next five days, the Pesca Panama motorized barge. Onboard, the accommodations weren’t luxurious, but they certainly weren’t Spartan. Each of the four four-bunk rooms was air-conditioned, and there were two full bathrooms with showers of unlimited hot water. The bow of the barge held a common eating area and, more importantly, the bar where Jaime, the bartender, was always quick to have our favorite beverages ready for us the moment we stepped aboard the mothership.

After a quick lunch of fresh fish, we changed into our fishing gear and set off for a half-day of fishing. I didn’t really need to pack much, as the only activity on the agenda was fishing. I packed two pairs of technical fishing shorts from Old Harbor Outfitters—they have built in buckles for a fighting plate so you never have to wait to put one on when a fish strikes. I also packed the usual sun protection: Costa del Mar polarized sunglasses, my lucky hat, and a Calcutta neck gaiter. The most important piece of equipment I packed was a set of knee pads. You spend a lot of time fighting powerful fish with your knees braced against the gunnels; without knee pads, what is an annoyance on day one becomes a painful proposition by day four.

It was not long before we spotted a school of bonita breaking the surface. Medium-sized Deadly Dick’s proved irresistible, just as they do on false albacore back in the Northeast, and soon we had landed several on light tackle. Bonita serve as both live and chunk bait in Panama, depending on the target species. That afternoon, they were to be used as chunk bait for bottom fishing.

Arriving at the bottom-fishing spot, I sent a large chunk on bonita to the bottom on a circle hook. I was using a spiral-wrapped rod I made from a Hercules Super Seeker blank that was fitted with a Shimano Talica 25 reel. I had this spooled with 100-pound-test Power Pro Hollow Ace braided line finished with an 80-pound-test wind-on leader. I felt that with this set-up, I was ready for whatever Panama had to offer.

It was not long before a telltale nibble alerted me to the presence of a hungry fish. However, when the fish devoured my offering and ran, I was unprepared for the violence of the strike. After I counted to five and pushed the lever drag forward, the rod bent to an impossible angle and I nearly went for a swim. I eventually gained command of the fish and was rewarded with the orange glow of a 60-pound cubera snapper—and our week was just getting started.

Pesca Panama operates in the Coiba Island chain in the Gulf of Chiriqui on the Pacific coast of Panama. The topography of these islands is reminiscent of the opening scene of “Jurassic Park.” You can almost imagine a Cretaceous-period reptile bursting through the jungle. The coastlines of the islands are rocky volcanic outcroppings capped with green vegetation. Waves crashing into these severe shorelines create whitewater beneath which large roosterfish roam. The steep drop-offs and rocky bottoms are home to cubera snapper, grouper and mutton snapper of gargantuan proportions.

These islands also mark the home of the famous Hannibal Bank, where black marlin is king and all manner of pelagic species are plentiful. While there are several guide services that fish the same Coiba Islands and Hannibal Bank, most are located on the mainland and travel time to the fertile fishing grounds is several hours each way. Pesca Panama offers a unique experience in that guests live aboard a motorized barge that anchors close to the action and serves as a mothership. This allows anglers to maximize the time spent fishing.

A typical day began before dawn, enjoying a full breakfast while watching the sun rise over a protected anchorage lined with palm trees. We’d then depart on 26-foot Ocean Master center consoles for a short run to jig live bait with Sabiki rigs.

Once we had filled the baitwells with blue runners, we’d either begin the day trolling for marlin on Hannibal Bank or cruise the islands and toss topwater poppers in hopes of landing roosterfish, jacks and snappers. During my week, one of the most successful inshore lures was the simple Roberts Rangers, which appeared to be as attractive to the gamefish in Panama as they are to our bluefish back home.

Another option is to begin the day tossing topwater poppers to many schools of yellowfin tuna that feed on Hannibal Bank. The yellowfin are fished by running to pods of aerobatic porpoises crashing through bait balls and casting big topwater plugs into their midst. The adrenalin rush of seeing the wake of a tuna tracking to your popper is indescribable. This feeling is surpassed only by the exhilaration of feeling the power of the fish on the other end of the line.

We spent our first full day of fishing chasing tuna. I can assure you that the Spanish-speaking yellowfin off the coast of Panama are every bit as frustrating—and thrilling—as their bluefin cousins.

We had just tracked down a school of jumping porpoise. My buddy was in the bow working a popper. I tossed a live blue runner into the midst of the school and let the little guy drift. It was jus a few seconds until the line started to move and the tip of the rod started to twitch. I could sense the nervousness of my bait. Then it happened. The line began to fly off the open spool of the Shimano Saragossa. I flipped the bail and the familiar sound of peeling drag was music to my ears. The captain began screaming, “REEL, REEL, REEL!” to set the circle hook—but all I could do was hold on and hope the hook held. After the tuna’s initial run, I began to pull up and reel down, and it felt like I was making good progress…then came the second run. I was down to half a spool. The captain maneuvered the boat, and I was able to gain back some line. This process repeated several times, and then I begged for the harness. My forearms were burning, my back was on fire, and there was no way I was losing this fish.

Luckily, I brought a shoulder harness and spinning rod attachment that provided me with enough leverage to give my arms a relief. After what seemed like an eternity, the fish began its death spiral. The 200-pound yellowfin hit the deck after a 45-minute fight, and I felt on top of the world. Needless to say, the cold cervesas on the ride back to the barge were the best I have ever had.

After a warm shower back at the barge, we met in the common area as the sun began to set, to partake in a plate of fresh sushi and cocktails and to tell slightly embellished tales of the day’s catch. Dinner consisted of what was caught that day and combined with fresh vegetables proved to be a delicious meal. The food was quite good; the conversation and camaraderie was even better.

During the week, we caught multiple species of jacks, groupers, and snappers, including mullet snapper, which in my opinion are nearly identical to striped bass except for being red in color. We also caught yellowfin tuna, roosterfish and mahi mahi. We struck out on marlin, but one group in our party caught a sailfish.

Our last day of fishing was spent targeting inshore species. It was exhilarating to see roosterfish chase our topwater plugs and frustrating to see them miss the strike. Unfortunately, all good things come to an end, and our trip ended with a cruise upriver to the marina where the barge awaited. After a shower and a 35-minute flight, we were back in Panama City. This last night was spent at Jimmy’s restaurant for a feast of grilled octopus and huge steaks!

Reality hit after the 5½-hour flight, when cold air blasted us as we walked up the gangway to stand in line at customs.

I can’t wait for next year.