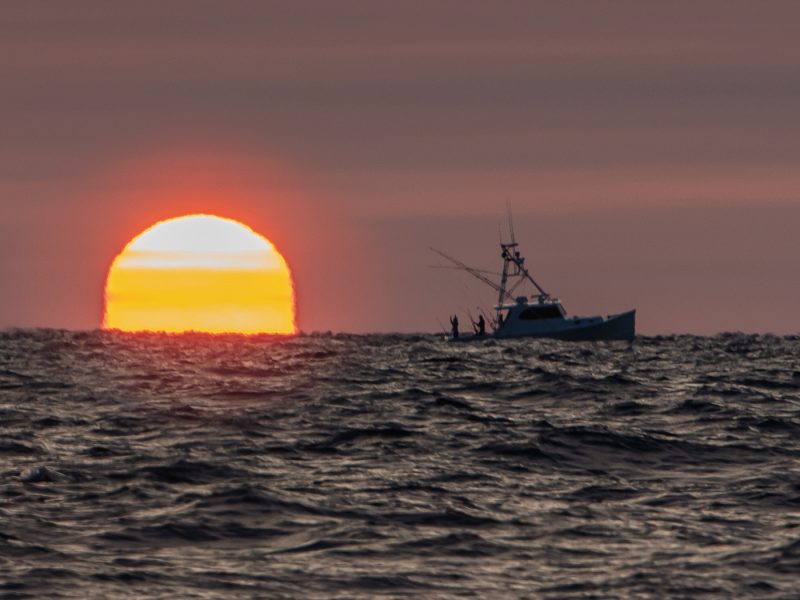 Photo above by Joey Manansala

The change is subtle at first, as the thin white haze at the bottom of the fishfinder screen thickens slightly. As the night sky grows darker, though, the screen grows whiter. Soon, everything below the thermocline is clouded up; next, the thermocline becomes obscured by clutter. I then start seeing flashes of silver beside the boat reflecting the intense Durabrite spreader lights. The bait has risen to the surface.

Fishing offshore at night is not for the faint of heart. You’ve got to be prepared to spend the night getting little (if any) sleep. You must endure the dampness and the cold, empty darkness that surrounds you. But, with the proper precautions and preparation, it does offer more opportunity, and sometimes becomes nearly a necessity to consistently catch big fish.

That was particularly true last summer. As much as I tried, I just wasn’t having much luck hooking tuna during daylight hours. Meanwhile, other boats were bringing in fish with ridiculous regularity. I finally decided to suck it up and start doing overnight trips, and it quickly paid off.

Safety should always be your first priority but that’s especially true when nighttime fishing. Boating regulations require a person on watch at all times while on anchor or adrift. Since I typically fish with three anglers, one can slip off for an hour or two to nap (or at least try). The constant rocking, water lapping against the hull, and commotion on deck checking baits and tending lines usually makes sleeping a futile effort, but some get used to it.

Whether on anchor or adrift, always have an anchor light turned on. Most of the boats that fish at night run bright spot and spreader lights as well, but I sometimes run only the anchor and cockpit lights to save on battery power. It gives our crew enough light to work in the cockpit and still be seen by other boats. 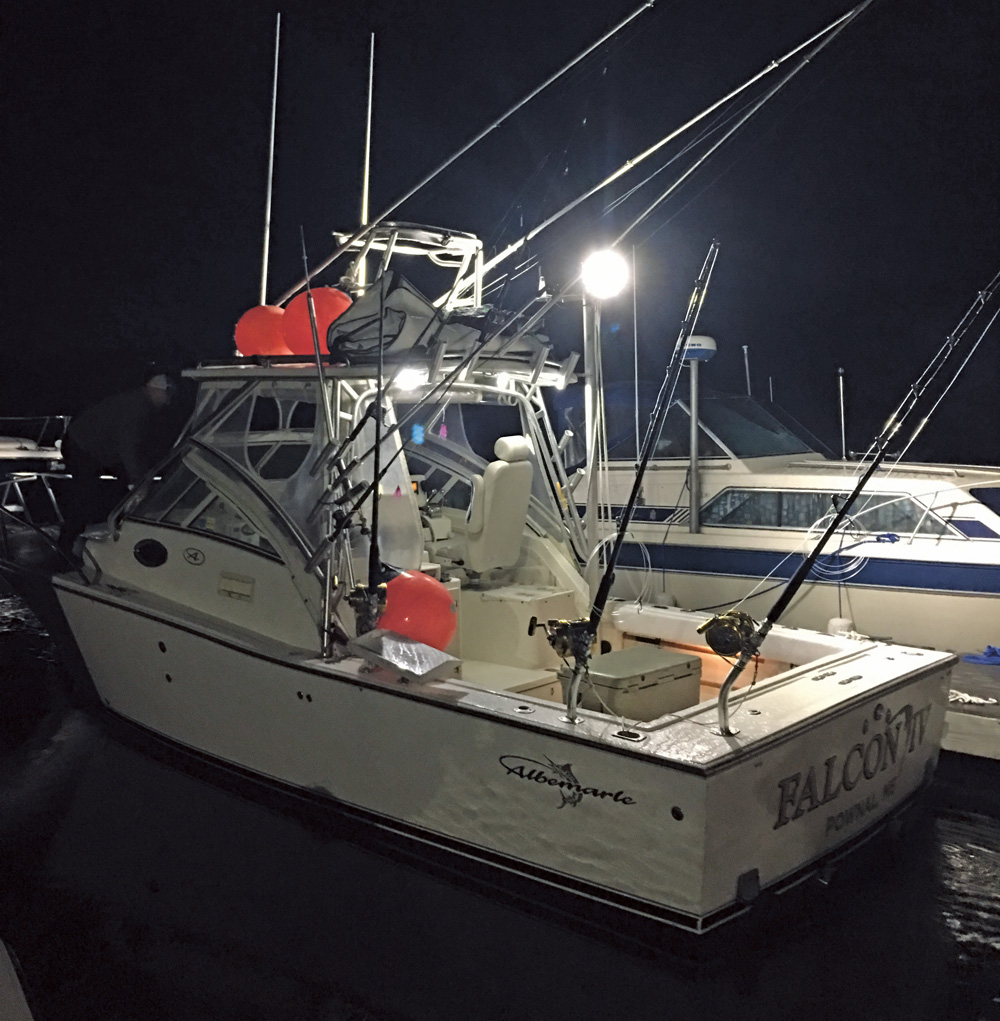 Fighting big fish at night calls for good lighting. Commercial boats often have big light arrays that can just about turn night into day, though smaller boats can get by with less. In addition to the standard cockpit and spreader lights, I run two (fore- and aft-facing) Durabrite Mini Sports. They use minimal battery power but provide sufficient illumination for catching bait and battling bigger fish. Try to position them so that they illuminate near the boat without reflecting off the gunwales and deck, especially in a white boat.

Most times, we are fishing in a fleet, which has its pluses and minuses. It’s nice to know there are others around should something go wrong, but other boats can get in the way if you’re fighting a fish in tight quarters, which becomes even more challenging in the dark. Most experienced tuna and shark fishermen know and follow proper etiquette, which includes pulling lines and dropping the anchor if someone fighting a fish gets too close.

It also helps to have a radio, or two. I always run two – one on scan and the other on the local fisherman’s channel. If nothing else, it’s a source of entertainment when things get slow. It’s also easier to hail a nearby boat and ask if they want you to pull up, or vice versa. Then, there’s the obvious ability to call for assistance if needed.

Whether you wear PFDs or not is up to the angler and the captain, but it’s not a bad idea, especially at night. It’s also smart (and mandatory on commercial boats) to use PFDs with reflective tape and waterproof lights to make it easier to locate a man overboard in the dark.

One of the distinct advantages of night fishing is bait. When the sun goes down, shoals of herring, mackerel, and squid rise to the surface. Then, attracted by lights, they swarm around the boat. Catching bait is usually just a matter of hanging a Sabiki over the side, and the livewell can be filled in minutes. The challenge then becomes keeping the bait healthy and alive, which means a large, round livewell with good circulation.

The other big advantage is the bite. Sharks feed all day but tend to be more aggressive at night. That’s particularly true of threshers and big porbeagles, which are notoriously hook-shy. For tuna, especially in 2019, the bite in Maine was largely at night or in the morning twilight. If you weren’t there, you missed it. If you were, you could expect a long and often very busy night.

When undertaking a nighttime fishing excursion, I prefer to arrive on scene far enough ahead of nightfall to get anchored and settled in. Since most tuna fishermen do the same, it’s a good idea to arrive even earlier to get a better spot, and maybe catch a tide change or dusk bite.

My first effort came after fishing all day with no results, Our crew decided to stick it out. With the fleet thinned out, we were able to pick our spot, and not a moment too soon. The sun was still up when the evening fleet arrived and anchored up around us. One by one, the boats went off anchor to fight a fish, leaving us frustrated.

It wasn’t until the sun broke the horizon the next morning that one of our rods bent over, so had we not spent the night, we would have missed the dawn bite and almost certainly would not have been in a prime location. And, it was a lot easier fighting the fish in daylight.

While catching bait after dark is easy, keeping it alive can be particularly challenging. Among the shoals of bait rising to the surface are hungry squid that will, and often do, chew hook baits almost as fast as you can put them out. If they’re hanging on your herring or mackerel, they might still elicit a bite, but it’s advisable to frequently check your baits, at least every hour or so. And, you can always get a little payback by putting one of those hungry squid on a hook. It tends to last a little longer before its brethren cannibalize it.

Having visible bobbers is helpful in keeping an eye on the baits while they soak. We use white Styrofoam floats for sharks and brightly colored balloons or bags for tuna. The rest is pretty much the same as during the daytime, and it’s up to you to figure that out. Then, it’s just a matter of waiting, and trying to stay awake, though catching bait and tending lines helps pass the time.

My next effort, a shark trip, provided a bite shortly after midnight and another around 3:30 a.m. The white Styrofoam floats proved invaluable for keeping track of the fish we battled.

Another nice thing about night fishing is that the wind usually dies down after sunset. We were fortunate last season to have some stellar nights when the wind died and the seas calmed to a glass-like surface, but that’s not always the case. Even a change in tide often brings shifting conditions, and I’ve spent a few nights where sleep was almost impossible, and merely standing upright was challenging. But when the balloon pops and line starts peeling off the reel, I tend to forget all but the worst conditions as I go to work.

Good communication is important as well. With my crew of three, one is on the rod, one’s at the helm, and the third clears lines, prepares the harpoon, and watches for lobster pots and other boats. The rod man continually gives out directions to keep the boat properly oriented to the fish, another increased challenge at night.

Even then, we sometimes run into trouble, as I learned on the last overnight of the season. The fish fooled us at first, pulling down the balloon and bending the rod, but taking very little line, which is usually indicative of a shark. It wasn’t until the fish swan by the transom, heading toward the anchor ball, that we realized it was a tuna. That left two of us scrambling to clear the other lines, fire up the diesels, and drop the anchor before disaster struck, and we almost pulled it off.

At first it seemed like we were clear, and we fought the fish for a good 25 minutes before I noticed the big orange ball looming off the stern. Try as I might, I couldn’t seem to pull the fish away from it., but then I realized the reason. Each time the fish ran, the anchor ball followed, and when we finally had color, we could clearly see the fish spiraling around the anchor line.

Fortunately, the fates were with us that night. Without breaking the fish off, cutting the anchor line, or winding it around the screws, we managed to get the fish close enough to sink a dart into it, which held just long enough for a tail wrap before pulling out.

Night fishing is always an adventure. It’s often characterized by long, slow periods of darkness and fatigue wrought from lack of sleep. But when the rod bends and line screams off the reel, the excitement and anxiousness seem magnified, as is the reward that comes with a successful conclusion.