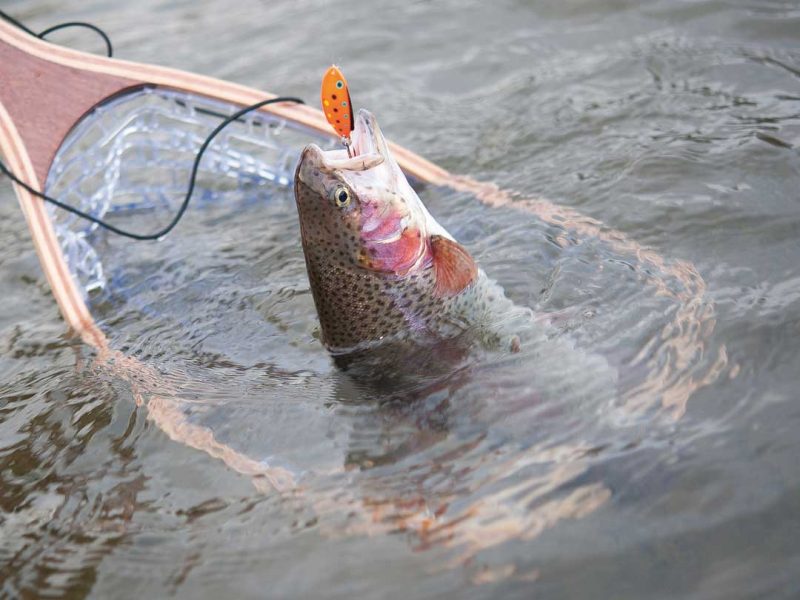 As someone who was raised in a region of upstate New York bordering the Adirondack wilderness, I never thought of Rhode Island as a trout-fishing destination. After all, not only is “Little Rhody” the smallest state in the nation, but it’s also the second most congested (behind New Jersey). In addition, Rhode Island is also known as the “Ocean State,” which conjures thoughts of saltwater fishing—and rightly so! It’s easy to understand why anglers might discount Rhode Island’s trout-fishing opportunities. But, Rhode Island does offer some great trout fishing, especially in its inland ponds.

When you purchase a freshwater fishing license in Rhode Island, you’ll receive a complimentary brochure titled Rhode Island Freshwater Fishing. Besides containing the state’s official rules and regulations, the pamphlet also has a specific page titled, “Designated Trout Waters.” This page lists all the brooks, rivers, reservoirs and, most importantly, the 43 ponds that make up almost half of the 99 designated trout waters within the state. Because these ponds extend all the way from Woonsocket in the northeast diagonally across Rhode Island to Westerly in the southwest, trout-fishing opportunities abound throughout the state. 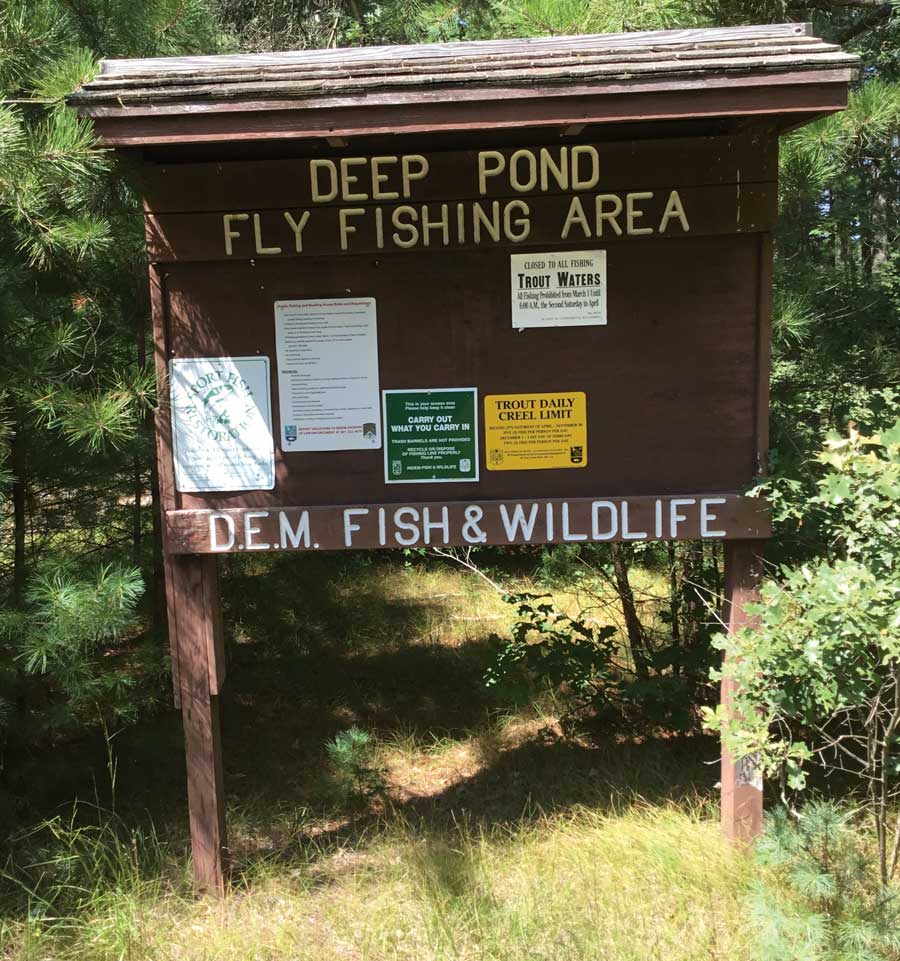 According to the Rhode Island DEM, there are no wild trout in Rhode Island’s ponds. But, most years, about 100,000 hatchery-raised fish are released into designated waters, with about 70 percent destined for its ponds. Of course, all of Rhode Island’s ponds are stocked prior to the season opener, but a number of ponds also receive repeat stockings throughout the spring, along with additional fall stockings, as well. The stockings typically include a mixture of brookies, browns, rainbows, and the odd golden rainbow trout, which I can testify are interesting fish to see swimming around, even if you don’t catch one.

It’s possible to catch pond trout using just about any fishing technique. Although usually not the most productive method of angling, fly-fishing is my favorite. Rhode Island’s pond trout certainly provide the opportunity to wave the long rod. In fact, three of Rhode Island’s ponds—Deep, Mowry, and Upper Rochambeau—are designated as “fly-fishing only.” 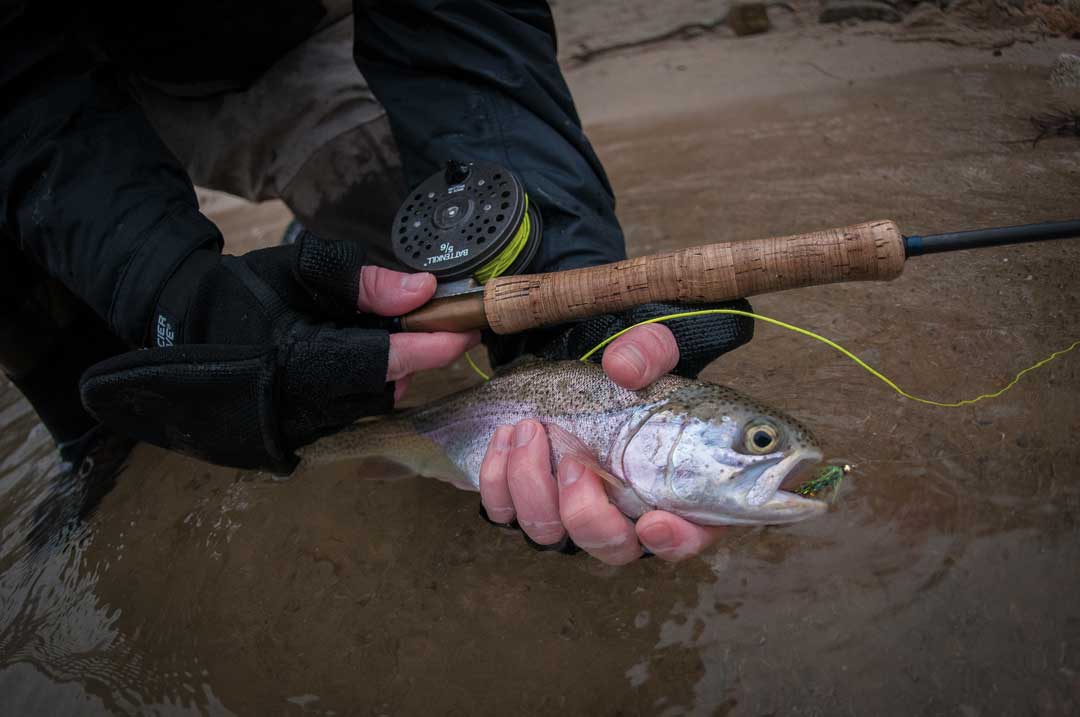 Because most stocked trout are small, equipment doesn’t have to be complicated. When fly-rodding, I use an 8 ½-foot, medium-action, Orvis 5-weight that’s balanced with a simple click-and-pawl reel filled with a weight-forward floating line. At the terminal end, I tie on a standard 9-foot, 4x tapered fluorocarbon leader. Operating on the premise that 90 percent of a trout’s feeding occurs subsurface, I also hedge my bets and don’t fish dry flies. However, hatches do come off on pond waters, usually in the early evening, and often in the shallower and weedier backwater locations of the ponds. Casting to boils and rise-rings with a generic pattern like a size-16 Adams or Elk Hair Caddis tied on a 6x-tippet should generate some hook-ups at these locations.

Nymphing, however, is my favorite method of fly-fishing for pond trout. Popular standbys like a size-12 or size-14 Hare’s Ear, Pheasant Tail, or Prince Nymph that’s stripped in slowly will usually draw some strikes. But, like all trout, pond trout can be selective and, unlike trout living in flowing water, they have time to examine your offering. Choosing the right pattern does matter, but color matters, too. If I had to pick one fly for pond fishing it would be the ubiquitous Woolly Bugger. When stripped in with slow, consistent, foot-long strips, this pattern represents everything from leaches to damselflies. The Woolly Bugger is a great search pattern, and when fly fishing a pond I almost always start off tossing a size-8 black Bugger. If I don’t get hits, I’ll switch to an olive color, and then maybe to brown, until I find what clicks.

Of course, another option is to spin-fish with spoons and spinners. Despite being hatchery-raised fish, Rhode Island’s stocked trout have predatory instincts. Baitfish provide a lot of nourishment, and a hungry trout won’t hesitate to grab a lure it perceives as a hapless minnow.

I don’t endorse following the hatchery trucks around, but one afternoon I coincidently pulled into the parking lot of a pond (this was in southwestern Pennsylvania) just as the stocking truck was leaving. The shoreline was lined with anxious anglers, and I distinctly remember the person who caught the most fish that day was casting a yellow Roostertail. On another occasion, I fished near an elderly gentleman who was casting a hammer-finished, gold-colored spoon. Every time I looked in his direction, his rod would be in a deep bend and there’d be a trout splashing on the surface. Spinners and spoons are great pond lures.

With regards to spinners, I personally prefer casting inline-spinners, like a 1/8-ounce Panther Martin Original Spinner. But, clevis-style spinners, such as small Roostertails, are extremely popular. When spinning for trout, my favorite spoon has always been a 1/8-ounce silver Acme Phoebe. When retrieved, this spoon has a unique wobble, and it is especially deadly for brook trout. But, any ¼-ounce brightly-colored spoon like a Kastmaster or Little Cleo will land some fish.

The big advantage of spinners, and especially spoons, is that they’re aerodynamic. When fishing ponds, you need to cover the water, and both spinners and spoons allow you to make long casts to reach potential fish. To get that extra distance, I like to use a long, fast-action, 7-foot rod combined with a medium-capacity reel spooled with 6-pound Berkley Trilene XL line.

Although working artificial flies or lures can be productive, if you really want to catch a trout or two, I believe your best bet when pond fishing is to simply soak a worm or commercially-scented bait. For almost any trout fishing, nothing beats still-fishing with a nightcrawler, garden worm, or a small meal worm. But, hatchery-raised trout are raised on hatchery food, and I believe it’s important to “match the hatch,” so to speak, when angling for Rhode Island’s stocked trout. Therefore, commercially-scented baits such as Berkley PowerBait and Trout Nuggets are just the ticket when targeting these fish.

Naturally, it’s all a matter of economics: It costs less, and hatcheries can raise more fish, if they release them early. In other states I’ve fished, I have rarely caught a hatchery-raised trout longer than 12 inches in length. It’s all relative, but considering they are hatchery-released fish, Rhode Island’s trout have a reputation for being disproportionately large, and often weigh a pound or more. As an example, last spring when fishing Barber Pond, just west of the URI campus, a friend and I caught fat 15-inch rainbows, some of the largest hatchery-stocked trout I’ve ever seen. That day we were using chartreuse-colored Berkley PowerBait Power Nuggets. We used standard slip-sinker rigs with the Nuggets attached to small size-10 treble hooks that were connected to 18-inch leaders below the sinker at the terminal end. This setup allowed the baits to drift well off the bottom. It was trout fishing at its simplest, but we caught some fish.

It’s well documented that trout are attracted to structure, but identifying structure in stillwater fisheries is sometimes a challenge. Keep in mind that inflows, which pump oxygenated cold water into the ponds, and outlets, which collect insects and other food items, as well as spring holes, drop-offs, stumps, and exposed boulders are all choice locations to look for fish. Also remember that trout in ponds cruise around in search of food. Rhode Island trout are no different, and they do seem to travel in small pods. If you catch a fish, stay in the area, because it’s almost certain more trout are in the vicinity.

In my opinion, the only drawback to fishing Rhode Island’s ponds is that shoreline fishing is limited. The waters surrounding the shoreline gradients are generally too deep to wade, and although the tree-lined and pine bough-shrouded shorelines add to the ponds’ rustic ambiance, casting is often impossible. Truthfully, the most practical way to fish Rhode Island’s ponds is with a float tube, kayak, or canoe. Fortunately, the ponds have excellent amenities, including well-maintained parking lots, along with convenient launch-sites for hand-carried watercraft.