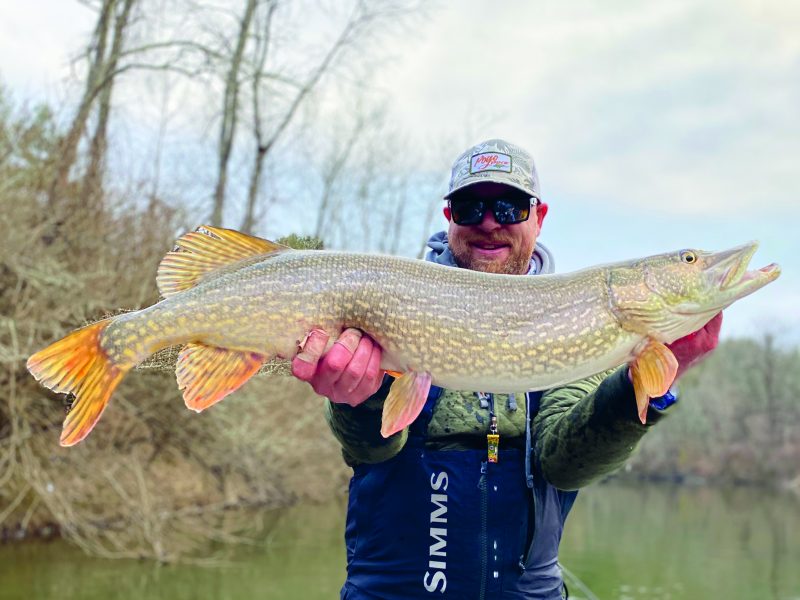 Pike fishing location is based on water temperature more than season. Stephen Pogodzienski broke down the year for me, laying out where fish should be. Location follows two basic rules: in colder water, the fish seek slower areas, and when the water warms, they seek current or depth.

In winter, pike relate to slower-moving sections of the river. They can be caught, but their metabolisms slow. Alter presentation to accommodate this by slowing down, and always use the figure-eight. Sometimes, you’ll need to sell your offering to lazy fish. Winter is the time to get a big fish but not necessarily numbers.

After spawning, a period of heavy activity begins. Pike stay shallow, following forage. Optimal metabolism temperature is around 66 degrees, and they’ll feed aggressively as the waters reach this temperature. You can downsize your fly offerings in early spring to mimic the smaller profile of young-of-year baitfish.

Water over 75 degrees reaches the avoidance level for pike since they are coldwater fish. Warm water stresses them. An ethical angler should fish the coolest portions of summer days, which are dawn and dusk. Handle predators gingerly and return them to the water promptly. Revive them by holding them into the current—they will tell you when they are ready to go.

Late August brings cooler nights and declining water temperatures. Pike feed heavily as this happens because their instincts are telling them the coldwater period of inactivity is approaching. The fall is one of the best times of the year to target pike, and it is a great time to look for a real trophy fish.

The sound of the oars stroking water filled the silence on the Stealthcraft Power Drifter captained by Steve Pogodzienski, also known as Pogo. It was one of those lulls in the conversation that happen when fishing from a drift boat, a bit of quiet that allowed me to hear the oars as we pulled up on another spot. Steve was at the oars in the middle while my friend Scott Tirrell and I cast big flies and swimbaits at shoreline structure for northern pike.

I stripped line and built a cast, the oar sound now joined by the hiss of my 10-weight fly line false-cutting through the air. I threw the fly tight to the shoreline and worked it back toward the boat. “Slow. Deeper.” Steve nearly whispered. It had been a good cast – what Steve would call a “reward me” cast. We expected that result, even though a hundred other casts that day had come up empty.

I allowed the fly to sink. “Tip in the water,” Steve told me. I dropped the rod lower and stripped. We could see the fly four feet down. After I stripped. the fly paused and kicked, turning on its side. As if in a movie, the monster made his dramatic entrance: a fish that would give children nightmares engulfed the fly. I strip-set as hard as I could, and my rod bent to the weight of the pike. “I’m on”, I said and the fish dove for mid-river.

It was a shocking take, violent and of pinpoint accuracy. The fly simply disappeared in the mouth of the angry predator.

The more time you fish for any species, the more data points you accrue to apply to future situations. Since guides live on the water, it makes sense to listen to them. I did so with Steve, and I learned about technique, fish location, and gear required to target them.

Pike flies are tied in three parts and when repeated up the hook shank, they build a fly to its head.

The motion of these big flies in the water, kicking, and gliding, was mesmerizing. I made slow, long strips, watching the head of the fly pushing water around its wide profile. I then paused to let the hackles pulse as the fly hung and kicked to one side, showing its full, bulky profile to following fish. Lastly, I stripped the fly back to life to make it kick to the other side.

Fly fishing for pike requires weighty rods, in the 8- to 12-weight class, though heavy rods and large flies are not easy to cast.

After fishing, a novice’s arm will be sore. Let the rod flex, load, and shoot line at the target.

After casting, work the fly and make it swim. Keep your rod tip pointed at your fly. Keep as straight a line from your rod to the fly as possible because slack line makes hooksets far more difficult.

Convey through your fly that it is a fleeing and weak prey, trying to escape danger. Once the fly reaches you, there is a final motion of a cast that dramatically increases your chance of success: the “figure eight.” Brad Bohen estimates that 75 percent of the strikes he generates for clients occur within a rod length of the boat.

The real game is getting a fish to follow it in and eat here, in sight of the angler and the whole boat. To figure-eight a fly means that as it reaches you at the end of a cast, you drop the rod tip into the water and draw a figure-eight pattern below the surface. This motion is designed to suggest that the target has given up attempts to outrun a following predator and is frantic. It is amazing to watch a fish strike during a figure-eight. 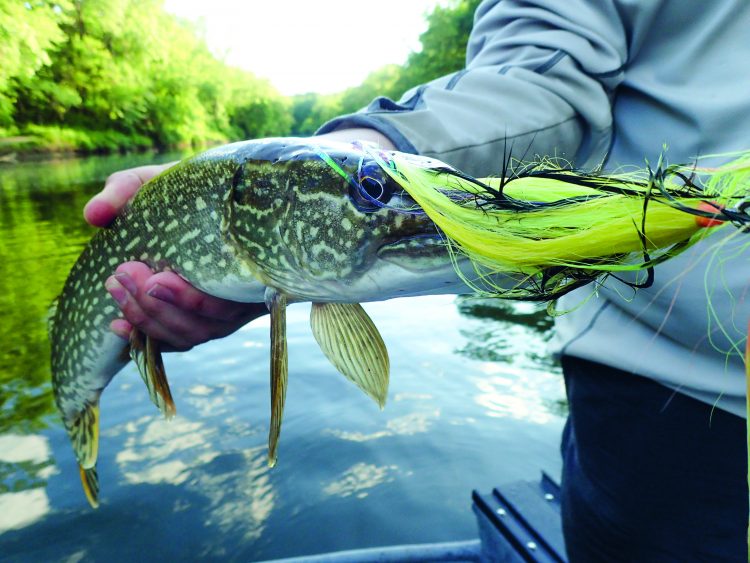 This can even be done from shore, simply by creating a directional change as your offering approaches. Just sweeping a fly from left to right simulates the beginning of a figure-eight and can induce a strike. When figure-eighting, keep your off-hand tight to the fly line. Use both hands: one to hold the rod and the other prepared to strip-set when a fish takes.

Once a fish bites at any point in a retrieve, the most crucial aspect takes place: the strip-set. Takes are memorable, often visual, and for the most part few and far between, so missing a pike is crushing. It could be the only fish you’ll see that month.

In most freshwater fly fishing, when a strike occurs, it is second nature to lift the rod tip to set the hook. This is the opposite of what you must do when pike fishing. Instead, keep the rod tip pointed at the fly and rapidly strip line through the guides until you can’t anymore.

Steve Pogodzienski gave me advice on learning to strip-set during one of our “gentlemen’s breaks,” a down period to regroup, hydrate, and rest. He said to me, “Cast into a weed bed with a streamer. Just throw it into the weeds. Point at the fly, feel the contact with the weeds, and strip hard.” I did so and, after a few casts, I developed a mantra to help. When stripping my fly, I repeat the words to myself: Strip. Set. This puts the idea in my mind, and when the time comes to act, I feel mentally prepared.