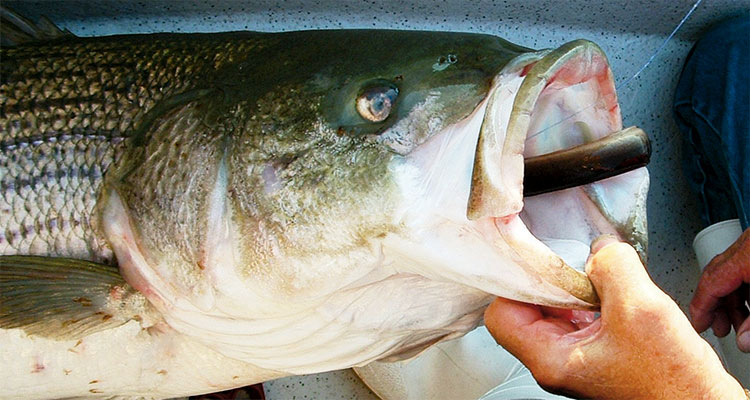 Full or hungry, a striped bass just can’t resist an eel drifted in its living room.

It was one hell of a night, the kind most fishermen dream of but never experience. Joe and I didn’t head out until well after sunset, when we met two fellow club members on their way in.

“Too damn flat out there. No tide, and the only hits we got were bluefish. You’re wasting your time,” said one of the two fishermen. Whether he knew it or not, he had issued a challenge because I was out to prove him wrong. We had a large pail containing the last of my eels, about 15 of them, including one mutant that was as big around as a man’s wrist. However, when he mentioned bluefish, I asked him for a couple of extra eels, and he dumped another six snakes in my bucket.

It was the second night after the full moon, and the fish had not been feeding, except for some teen-sized bass on top right before and just after first light. At the time, I had a state-of-the-art Apelco flasher unit, a compass, and a VHF radio, along with a fair recollection of nearshore ranges. Our first stop was a breaker off West Island, and on his second cast Joe warned me that a bluefish was chomping on his bait’s tail. Taking heed, I spun the handle on my reliable Penn Squidder and began a rapid retrieve. We had another hour before there would be enough moonlight to cause the fire-in-the-water to fade, but I wasn’t sticking around that wash any longer for fear of losing more eels to bluefish.

With the prospect of the moonrise, I headed for a seldom-fished spot that was surrounded by two huge boulders, a place I could get into on this relatively calm evening. If there was a fish in there, it would take only a cast or two to find out. Joe waited for me to get closer and point our bow out before he unleashed his eel.

The snake hit the water and there was an almost immediate explosion. He set the hook while I kicked the gearshift into forward, moving us out of the boulder field into deeper water. My deck mate told me it was a good fish, and it was heading toward the edge of a protruding boulder, so I told him to lock down the drag and hold on. The strain on the line caused the fish to come to the surface and thrash around before tearing off into deeper water. I moved us out over a gravel bed between that structure and a breaker, a hundred yards distant, and shifted into neutral. I was a spectator to a battle that was won with a heavy custom conventional rod and steady pressure from the Squidder’s smooth drag. I sent the gaff into the thick flesh just forward of the dorsal fin on the feisty striper that was every bit of 35 pounds. Not bad! We were way ahead of our fellow angler’s expectations and our night was just getting underway.

We were fishing for award pins in the R.J. Schaefer fishing contest, where any striper over 15 pounds was a “point fish,” and blues of any size were eligible for points toward our club standing. We killed one hell of a load of fish in the hunt for glory and folding green, never once considering, or knowing, that collectively we were taking a huge chunk from the biomass of a resource incapable of replenishing itself at that time.

A wild hooked bass can clear out an area in a hurry, and that’s exactly what happened in that hole. Successive casts proved to be futile, so I pointed our bow east. In the next four prime locations, the bluefish beat any bass that might have been in residence to our eels. It seemed like all the shallow spots were populated with blues that evening, so with about half of our bait gone, I headed offshore to a rise that climbs from 45 to 15 feet. I grabbed a piece of the damp burlap, dabbed it into the sand container, and reached around in the eel container for a thick one. I was about to make a cast toward the peak when I noticed Joe trying to clear a backlash. Instead, I lowered the eel over the side, set the anti-reverse and grabbed the penlight. I was helping my mate pick away at the backlash when the clicker on my reel began to scream. The snarl could wait.

The line was coming off that spool so fast I had to thumb it carefully to prevent an overrun and a resulting backlash.

The line was coming off that spool so fast I had to thumb it carefully to prevent an overrun and a resulting backlash. I pointed the rod tip toward the fish and engaged the reel. This was no bluefish. With little structure to scrub me off on, the big fish dogged the bottom, making short, powerful runs, but for some reason, not tearing off a longer dash toward the spike where it could do more damage. The fish came up reluctantly, but every time it saw the shadow of the boat, it dove for the bottom. Two more similar runs and it was finally in the cockpit, slapping its broom-sized tail and heaving its gill plates. Three hours later, that fish would pull the Linesider Bass Club scale down to 43 pounds.
All around the walls of that spike we caught bass on the remaining live eels, then we used the white cadavers until they fell off the hook. Then, there was only one eel left, the honker that we had been avoiding all night. I was beat, but Joe was still fired up.

“There’s got to be a fifty in this bunch,” he said. “Help me put this snake on the hook.” That’s when the fun began! All night long we had cautiously poked around the eel bucket, avoiding that wrist-thick serpent making grunting noises whenever we probed the container. The big eel had twice escaped the tall pail, but hadn’t made it to the scuppers before one of us corralled it and put it back in the box. That serpent was every bit over two pounds and well over two feet in length, and when I grasped it behind the gills, it wrapped around my forearm like a boa constrictor. Joe took a grab about halfway down its body and we wrestled with the eel until he could stick a gold 9/0 Eagle Claw offset under the jaw and out an eye socket. By that time, my long-sleeve tee was gurried from elbow to cuff. I held the tail while Joe grabbed the leader and we released the snake in the water. There wasn’t a trolling rod on board stiff enough to cast that monster.

That was the last eel. Now I could clean up the bloody cockpit, properly stack our catch into the fish boxes, and put some gear away while I humored my friend who wanted to use our last eel. Not a minute after it was introduced into the water, my pal yelled out that he had one running. I smiled and told him he had a conger eel on there and it was searching for a big rock to hide under. That was when he yelled at me, “Get over here and check this out!” He was as serious as a heart attack as the Dacron line hauled off his spool.

My mate had flirted with the 50-pound mark for the past two seasons, and he was convinced he now had a contender. After a very long, very tense ten minutes, it took both of us to muscle her over the gunwale and onto the deck. I refused to voice an estimate, but I was certain she was a mid-50 and perhaps a bit more. The hot dog stand on the first floor of our club building had no set hours, so we were greeted by a cadre of old veterans sitting out front, sipping military coffee and chewing on Coney Island dogs. Dragging wet fish up a flight of stairs left a mess, but this night the grill man didn’t complain.

“Don’t worry about it, kid, I’ll get it with Lysol and the mop. Let’s get that porker on the scale before she loses any more weight.” Jake Viveiros had a 56-8 atop the leader board and Joe’s fish would scale 55-0 even, but you’d have thought he had won the lottery. He finally broke 50. My friend was a most generous man, who helped keep me and my habit afloat, and he knew how to say thank you: whenever we were together, he wouldn’t allow me to reach for my wallet. It was drinks all around and all the Coney dogs you could eat. The heartburn was horrific.

I’ve always preferred large baits, but after that dream of a night, I began looking for the biggest snake in the bucket. There is no such thing as an eel too big for a cow.