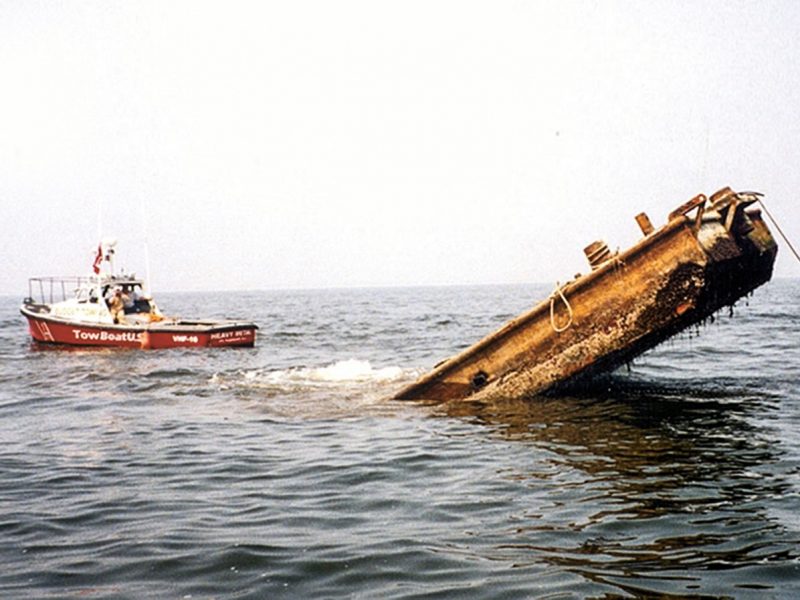 Pictured above: Since the 1980s, the New Jersey Department of Environmental Protection’s Division of Fish and Wildlife has constructed 17 artificial reef sites in locations 2 to 25 miles offshore. PHOTO COURTESY NJDEP

It doesn’t take a fisheries scientist to realize that a key element of effective fisheries management is accurately estimating the number and size distribution of the species being managed. A critical input into the assessment of stocks is “fishery-independent data”—that is, abundance information that is not biased by when, where, and how recreational and commercial fishing activities take place. Such data collection typically takes the form of bottom trawl surveys, which are conducted in both state and federal waters off the East Coast. However, for structure-loving species that live where trawls can’t easily catch them, such surveys may not provide catch data reflective of actual species abundance.

Speaking of structure, the New Jersey Department of Environmental Protection’s (NJDEP) Division of Fish and Wildlife maintains an artificial reef program to attract species like black sea bass and tautog and provide recreational opportunities for anglers and divers. Since the 1980s, with federal funding assistance from the Sport Fish Restoration Program, NJDEP has constructed 17 such reef sites in locations ranging from 2 to 25 miles offshore. But, key questions regarding what the reefs actually attract, and what kinds of reef structures are most effective, remain unanswered.

Fisheries scientists from Rutgers University have teamed up with NJDEP staff to address these knowledge gaps in one go, hoping to answer two critical questions. First, what species, and of what sizes, live on New Jersey’s artificial reefs, and how does that composition change with season, reef type, and location? Second, is it possible to design a survey method that uses stationary traps instead of a mobile bottom trawl to obtain reliable fishery-independent data for otherwise difficult-to-sample fish species that inhabit rocky, complex habitats?

The Who, What, and Where of NJ’s Artificial Reefs

“People are often surprised at how expensive it can be to sink a ship,” explains Dr. Doug Zemeckis, an assistant professor with the Rutgers University Cooperative Extension and a collaborator on the study. “We’re aiming to help local managers maximize their return on investment for the artificial reef program.” One question the research team sought to address was whether artificial reefs made of certain materials, such as concrete or metal, have different catch rates or species compositions. They were especially interested in examining how black sea bass, tautog, and lobster—important target species for anglers and divers—used the reefs.

To sample the artificial reefs, the research team deployed traps during the spring, summer, and fall of 2016, 2017, and 2018. The traps were placed in and around the reef structures as well as on nearby adjacent sand bottom as far as three miles from the reefs and were left in place for about a week between sampling. The 40- by 22-inch traps were “ventless,” meaning that smaller animals couldn’t escape, thereby providing researchers with a full picture of what was caught. And they were not baited—meaning animals went into the trap seeking shelter rather than a tasty snack—reflecting the typical practice of New Jersey’s sea bass and tautog commercial trap fishermen.

The team selected two artificial reef sites with different characteristics for sampling. The Sea Girt Reef lies in about 70 feet of water and consists primarily of metal shipwrecks and broken concrete. The Little Egg Inlet Reef, meanwhile, is shallower (50 to 65 feet deep), with smaller structures consisting primarily of concrete “reef balls.” Another main difference is location, with the Sea Girt Reef in northern New Jersey and the Little Egg Inlet Reef to the south. “We were curious to see if the appearance of species on reefs across this spatial range occurred at the same time,” says Peter Clarke, NJDEP’s Artificial Reef Program Coordinator and a project collaborator.

So, what species call these reefs home, and when? Some findings were expected. Most tautog and lobster, for example, were caught in close association with the reef structures. Black sea bass abundance on the inshore reefs was highest during the months of June and July, though the timing for each reef was different. “The sea bass showed up on the Little Egg Inlet Reef about a week before we saw them on the Sea Girt Reef,” explains Clarke, although it’s not known whether that lag was due to the same fish gradually migrating north or groups of fish moving in from offshore waters at different times.

Other results were surprising. “Our highest black sea bass catch rates were out on sand bottom surrounding the Sea Girt Reef, not associated with the reef structures,” Zemeckis said, hypothesizing that the Sea Girt Reef’s proximity to other nearby reefs may make the fish there more mobile. Scup, often a mainstay bait-stealing nuisance for the sea bass crowd, were caught by traps only for a few weeks during the summertime. And, generally, the broken concrete on the Sea Girt Reef held more life than the Little Egg Inlet Reef’s reef balls, possibly due to the different sizes of the concrete structures.

Some oddballs showed up on the reefs too. When the water was coldest during the spring, ever-charismatic ocean pout were common across sites. During the fall, conger eels, which fishermen often call “silver eels,” stuffed the traps. And I do mean stuffed—some traps had three to five of the slithering beasts crammed inside. Misery does love company, it seems.

Survey Says: Thinking Beyond the Trawl

From a trap survey design perspective, the researchers uncovered some interesting findings. “Since we caught very few tautog off the reef structures, it’s possible that trawls may be missing a large segment of the resource,” Zemeckis explains, mentioning that a trap or rod-and-reel survey may be needed for reef habitats.

With black sea bass, although previous NJDEP research has shown that trawl surveys appear to do a satisfactory job of assessing abundance, this project suggests that fish sampled on the reefs may be larger than those found on open bottom. As a result, further analyses of the trap and bottom trawl survey data are needed to continue evaluating survey methods for this species.

The researchers also encountered potential sampling biases unique to using traps. “While there’s a lot of available information regarding how well trawl survey catch reflects actual fish abundance and size, such data are lacking for traps,” says Dr. Olaf Jensen, Associate Professor at Rutgers University’s Institute of Marine and Coastal Science and the study’s lead investigator. “A fish must be attracted to and enter a trap in order to be caught, and numerous factors could influence that process.” For example, “priority effects”—the effect of one species’ presence in the trap on the probability of another organism entering that trap—could significantly influence catch rates.

Another bias that might be necessary to keep in mind for trap surveys is gear saturation—the traps in a given area can catch only so many fish before they’re full, leaving the potential that they are underestimating total abundance.

While the research team is still analyzing the copious data collected during this study, two findings are clear. First, artificial reefs are a key attractor for lobster, tautog, and humphead sea bass off New Jersey. Second, the trap survey approach offers great promise as a complementary finfish sampling technique to trawls—so much so that NJDEP has continued to operate the survey after the pilot study concluded in 2018. “Traps are a valuable tool for monitoring not just artificial reefs but all sorts of rocky, complex habitats throughout the Northeast,” says Clarke. “With similar pilot efforts occurring in several states, we’re optimistic that this approach could eventually become more widespread and coordinated across the region.”