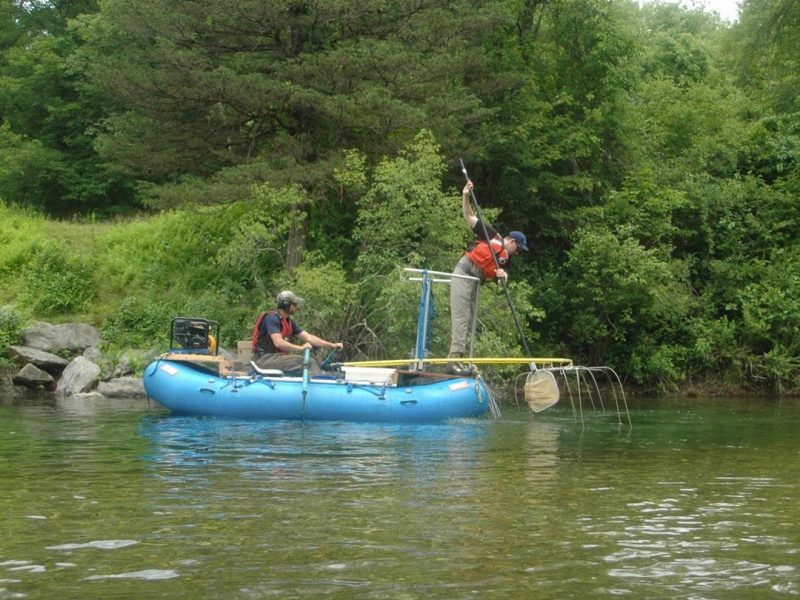 The Swift River, located a mere 30 minutes from Springfield and 45 minutes from Worcester, is one of the most unique and popular trout fishing destinations in Massachusetts. Many anglers fish these cold, clear waters year-round thanks to the constant outflow from Quabbin Reservoir. The Swift tailwater is home to many wild brook trout which can grow to trophy size. In addition, anglers target stocked rainbow trout and stocked brown trout, which can sometimes reach massive size as holdovers from previous stocking seasons. For all its popularity, the dynamics of this exceptional fishery have not been well studied understood. But that’s changing. After several years of observation, monitoring, and preliminary investigation, MassWildlife fisheries biologists have completed the first phase of research to learn about this unique stretch of river.

Based on feedback from anglers, the abundance of stocked trout in the river was not always meeting expectations relative to the quantity of trout being stocked there. In March 2021, MassWildlife launched a “mark-recapture” study to track the survival and movement of stocked trout over time. Stocked trout were marked with a small elastomer mark (a tiny permanent hardened dye, similar to a tattoo) near their eye, with a color that corresponded to the month of their stocking. Adipose fins were clipped on fish stocked above Route 9; fins were left intact on trout stocked downstream. Each stocking group was surveyed with electrofishing gear one week, one month, and three months after stocking. The number and location of each marked fish was recorded.

The study was completed in early 2022 and the results were analyzed shortly after. Results showed relatively sharp declines in stocked rainbow trout one week after stocking, followed by a more gradual decline over the rest of the season. Stocked brown trout showed a similar pattern, though less pronounced. Possible reasons for the decline include natural mortality from competition or predation, angler harvest, catch-and-release mortality, or movement outside the study area. Both rainbow and brown trout tended either to stay near the location of their stocking or to move downstream. These movement patterns could be linked to competition for space and food at different times of the year. You can get more details about the survey methods and results at mass.gov/swift-trout.

This is the most comprehensive survey to date on the Swift River tailwater, but many questions are left to be answered. Future planned studies will be expanded to include the prolific wild brook trout in that stretch of the river. The next phase of the study will rely on PIT (Passive Integrated Transponder) tags that can be continuously read by multiple antenna locations along the river and track movement of trout as they pass by. More information is also needed on harvest tendencies of anglers in parts of the river where harvest is allowed. Mass.gov/swift-trout will be updated with upcoming study plans and results from these investigations.