K9 Cramer Finds Illegal Catches – Nassau County
On April 8, seven days before the opening of striped bass season, ECOs Pabes and Macropoulos conducted surveillance at a popular fishing spot where the Officers watched a group of anglers catch at least two bass without releasing the fish. The ECOs observed the fishermen walk out of sight with their catch and return without the fish. The ECOs, including K9 Cramer, approached the fishing party who claimed they had not caught anything. K9 Cramer quickly alerted the Officers to an area where the anglers had stashed a total of 11 out-of-season striped bass, most of which would have been undersized if the season were open. Officers issued tickets to four fishermen for possession of striped bass out of season, returnable to the First District Court of Nassau County. 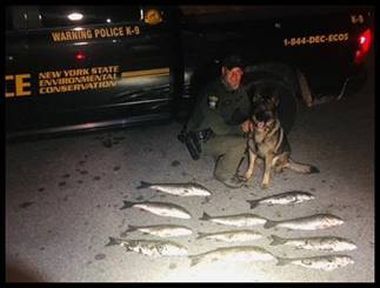 K9 Cramer and his “catch” for the night

A Dog’s Nose Knows- Nassau County
On April 23, ECOs called in K9 Cramer to investigate two anglers observed catching a striped bass that appeared to be undersized. When confronted, both fishermen insisted they did not catch anything. ECO DeRose brought in K9 Cramer and the four-legged officer quickly located a fully concealed undersized striped bass under a fallen tree. Before long, K9 Cramer found three more undersized fish in the area. The ECOs issued both fishermen tickets for possessing undersized striped bass and possessing over the daily limit of one striped bass. One of the anglers was well known to both ECOs, as this incident marks the third time this season officers have caught him with illegal striped bass. Consequently, the ECOs seized his fishing poles and tackle. The tickets are returnable to the First District Court of Nassau County.

Fish Bag Snagged – Nassau County
On April 24, ECO DeRose received a call from a complainant reporting nearby anglers who had caught a small striped bass but did not return it to the water. ECO DeRose reached out to ECO Perkins to assist and both Officers quickly responded. While ECO Perkins interviewed the fishermen, ECO DeRose and K9 Cramer searched the adjacent area. Although the fishermen all said they did not catch anything, K9 Cramer’s nose proved otherwise. The dog detected a bag hidden in a space in the bulkhead just above the incoming tide. Confronted with the evidence, one fisherman stepped forward and admitted the fish belonged to him. Officers seized the fish and ticketed the angler.

Catching the Run – Suffolk County
ECOs Simmons and Della Rocco worked a late shift on April 24 in hopes of protecting the striped bass migrating through Long Island waters. What started as a slow night picked up quickly when rumors spread among anglers that there were fish to be caught on the North Shore near Stony Brook. Using night vision, ECO Simmons lasered in on a group of anglers. After a while, the group started pulling striped bass up on the beach. In a matter of minutes, two anglers had caught and kept five undersized striped bass. ECO Simmons and Della Rocco confronted the subjects, found the fish, and issued four tickets for possession of undersized striped bass over the possession limit.

(Illegal) Catch of a Lifetime – Ambrose Channel, Marine District
On May 8, Sgt. Auguscinski and ECO Brussell inspected a vessel in Queens County and found the crew in possession of a 700-pound Bluefin Tuna. ECOs were tipped off by a Facebook post to meet the vessel at the dock. Upon inspection of the vessel, the Officers found that the crew did not possess the Federal Highly Migratory Species permit needed to fish for tuna. Officers in DEC’s Region 2 are also deputized NOAA Officers and referred the case to the federal agency to adjudicate.