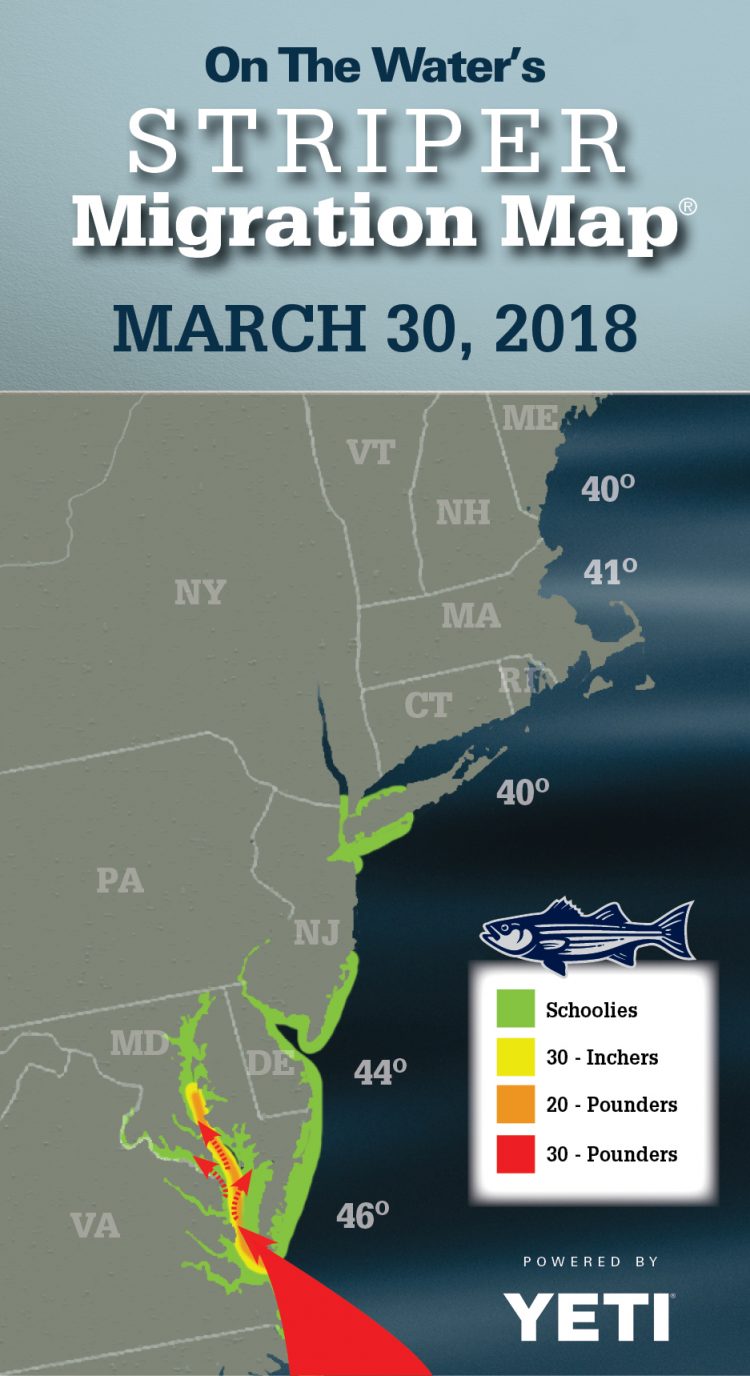 The striper migration has begun! March has been cold and stormy, but inshore waters are warming and the striper migration is progressing. Striped bass are moving toward spawning grounds in Chesapeake Bay tributaries, and smaller stripers are getting active in warming inshore areas in Delaware Bay, along the New Jersey beaches, in the backwaters at the west end of Long Island, and in tidal rivers in Connecticut, Rhode Island and Massachusetts. Follow along as we track the Striper Migration. You can help by contributing to our weekly map updates—simply share your striper fishing reports here, and on social media with tag #stripermigration.

On the upper Chesapeake, the water temperature in the Susquehanna Flats has been holding about 45 degrees and rising slowly. Pre-spawn striped bass are arriving and catch-and-release fishing for them is getting off to a good start.

In the main stem of the Chesapeake, water temperatures are cool, slowly creeping through the low 40s. Some anglers are enjoying a little catch-and-release action, but the fish aren’t very active except around the Calvert Cliffs Nuclear Power Plant warm-water discharge. Maryland’s Department of Natural Resources reminds everyone to take precautions to protect fish they catch-and-release, and follow the rules. The Maryland Natural Resources Police have issued a statement to help guide those fishing during the striped bass catch-and-release season, which ends April 20. One should also be forewarned that practicing catch-and-release fishing in the closed spawning areas can result in fines and license suspensions.

In inshore areas of upper Delaware Bay, short stripers are being caught and released, mostly by anglers fishing bloodworms and grass shrimp for white perch. Small stripers are also being caught in the lower Delaware River. Note that beginning on April 1, the striped bass season is closed on spawning grounds downstream of Calhoun St. Bridge near Trenton. To protect spawning striped bass, from the Calhoun Street Bridge downstream to the Commodore Barry Bridge at Bridgeport, non-offset circle hooks must be used when using bait with a #2 sized hook or larger, from April 1 to May 30.

Warming air temperatures have helped the back bay striped bass action with more consistent bites occurring at the bridges, mud flats, and hot outflows. Fisherman’s Supply in Point Pleasant reported good bites at first light and dusk, with the north and south pocket of Manasquan Inlet holding some fish in the 16- to 24-inch range. Most have been hitting on 4-inch shads and small Yo-Zuri Mag Darters. Grumpy’s Tackle in Seaside Park reported that small plugs, shads, and bloodworms are all working in the backwaters. Tony’s Bait And Tackle in Manahawkin reported a few consecutive days of good striped bass action along the banks of Oyster Creek. Bloodworms or small bucktails tipped with an artificial grub/shad tail have been responsible for most of the hookups. Riptide Bait And Tackle in Brigantine reported striped bass in the Mullica and Tuckahoe rivers. Most of the fish have ranged from 14 to 23 inches with no keepers weighed in. Fin-Atics in Ocean City reported some action fishing the bridges at night.

Backwater areas on the West End of the island were holding some schoolie stripers, and the fish have been a little more active thanks to warming water temperatures. In Brooklyn at Bernie’s Bait and Tackle, they said anglers are starting to target schoolie striped bass in the area. In Wantagh at Causeway Bait & Tackle, they reported anglers having great success with schoolie striped bass in the back bays. The bass should be moving in greater number in the next couple of weeks, with the temperature starting to warm.

The holdover striper fishing has been good in the Housatonic River and in Connecticut River tributaries, and the fish will only get more active once the water begins to warm. Other tidal rivers in Connecticut and Rhode Island have holdovers, but first-hand reports have been hard to find. Anglers are predicting that the first sea-lice covered schoolies will show up along the Rhode Island coast sometime in mid-April.