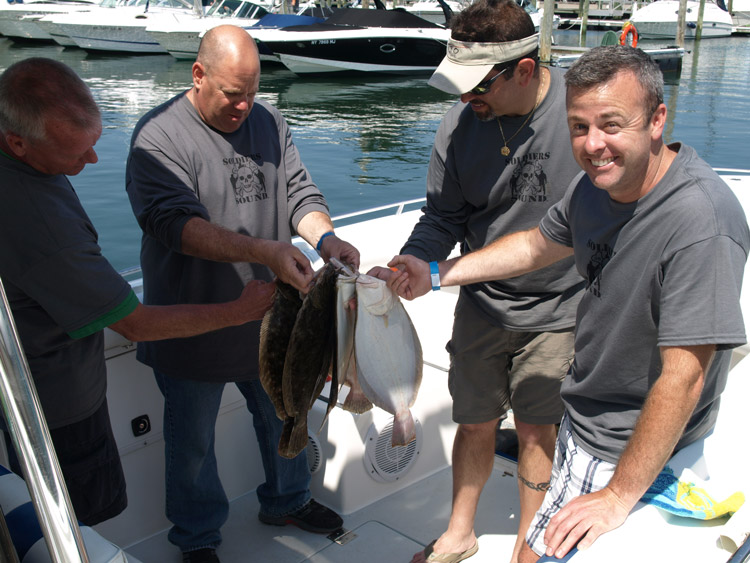 The United States Marine Corp Color Guard marched down the walkway and presented the colors. It is always a somber, inspirational and chilling moment when the flag of the United States is raised and Star Spangled Banner begins. With hats off and hands to their hearts more than two hundred men and women paid homage to a legacy that is the foundation of our American freedoms. When the nation’s anthem ended the cry that erupted was not, “Play ball!”, but rather…”Let’s Go Fishing!” The occasion was the 6th Annual 2014 Soldiers on the Sound Fluke Fishing Tournament, an event begun in 2009 as a means to pay tribute to active members of the American military.

The concept for this very special day is credited to King’s Park resident, Mark Garry who felt a compelling and overwhelming need to honor members of our armed forces who are currently serving our country. Mark’s dedication to both cause and mission is admirable and intense. Along with his incredible team of volunteers he took his vision from a seed of an idea and turned it into reality. From the start, the Smithtown Bay Yacht Club and the Veterans of Foreign Wars, Post 395 from Saint James signed on to make this event an instant success that has only gotten bigger and better in subsequent years. An army of “Pink Ladies” volunteers also worked tirelessly and selflessly to orchestrate the logistics of food service and raffle prizes. In addition, fifty-eight boat captains and mate donated their time and boats to get more than 125 military men and women on the water for fabulous day of fluke fishing. The military branches participating in this year’s event included: the Marines, Air Force, Air National Guard and Coast Guard. The most prominent presence during the day were member of the renowned 106th Rescue Wing of the New York Air National Guard based in Westhampton. The “106” has had the most robust turnout of personnel since it has the longest standing partnership with the tournament and has been involved since the inception of the event.

Captain Adrian Mason of Time Flies Fishing Charters was like 57 other gracious captains and donated his boat, time and skills to host three eager solider anglers: Chief Master Sergeant John Bellissimo; Master Sergeant Pete Murro; and Major Keith Sumwalt. Two of the three soldiers had participated in previous tournaments but were as eager as kids on Christmas morning to catch fluke. Captain Adrian did not disappoint as a number of quality summer flounder were caught, including half a dozen large keeper fluke. As is so often the case in events like this, the “catching” is usually secondary to the camaraderie, the laughter and the opportunity to say thank you to a group of patriotic Americans. Captain Mason feels the same way: “I have been involved with the Soldiers on the Sound for 4 yrs, and I can’t thank these service men and women enough for all they do. Spending a day on the water with them seems like such a small way to say thank you , but it really means a lot to them. They are heroes in my book and this tournament treats them as such. I am honored to be a part of it every single year and I am already planning for next year.”

While the initial event five years ago was a tremendous success, the 2014 tournament sets the bar higher yet again. This event just keeps gaining momentum, and although it doesn’t need improvement it keeps getting better each year. All soldiers and civilian participants were treated to a pre-tournament breakfast, a hearty barbeque, a hot buffet and beverages upon their return from fishing. An extensive raffle was also held. It has become a standard of this event for prizes to be handed out non-stop for almost 2 ½ hours, including kayaks, flat screen TVs, internet tablets, and BBQs. There were many premium gifts dispensed. One lucky soldier walked away with not one but two 52-inch flat screen TVs. Kayaks, BBQs, fishing gear, electronics and exotic trips were all donated by other caring, patriotic and loyal supporters.

Beyond the fishing, the food, the prizes and the camaraderie of the event, one soldier from the 106th Air Rescue Wing summed it up the day best: “You cannot imagine how much an event like this means to the entire base. Even those soldiers who did not attend will be talking about this for weeks. What matters most of all this is that we know people here on Long Island care about what we do. We are already looking forward to next year.”