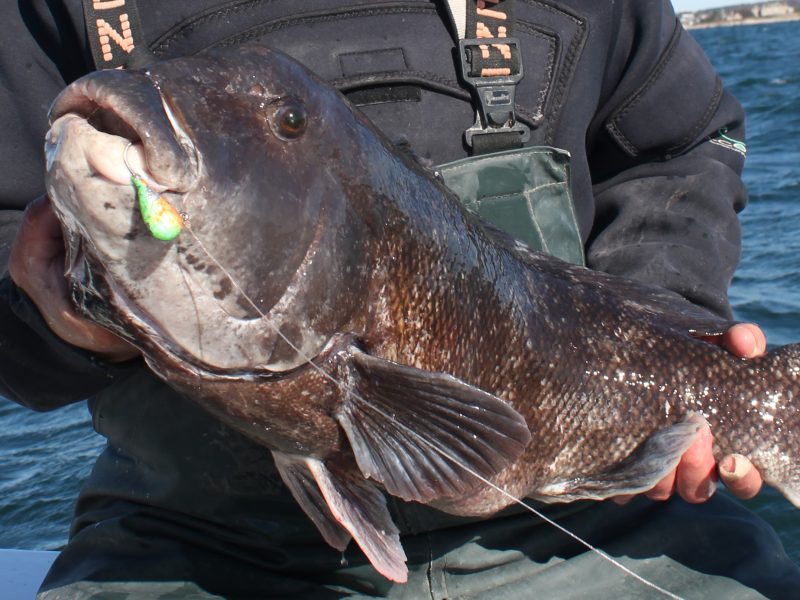 Captain Jason Colby was but a second or two into the tautog when he nodded in my direction that this was the one. Still smarting from loosing the tog of my lifetime, my original thought was, “Oh-oh, could he be hooked up to my tog?” I shook off my malaise, shoved my rod in the holder and scrambled for the net. By the strain on his rod and the sound of the peeling drag, it became obvious that my urgency was unnecessary – this would take time.

After a see-saw battle, the skipper finally heaved the enormous “whitechin” into view, and from that moment on, my image of a tautog was totally shattered. With purpose I drove the net just below the big blackfish and let Jason lead it to the edge of the rim. A moment later we, along with friends Gil Valentine and Glenn Verdini, stood ogling at what would prove to be 30 inches and 14.75 pounds of beastly blackfish lying on the deck of the Little Sister. The tale of the tape was authenticated at Westport Marine. 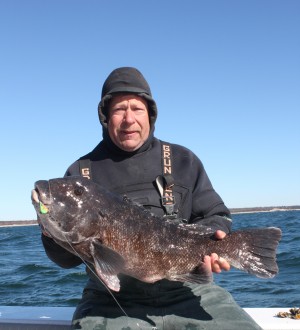 Amazingly, this past Thursday would have been an epochal day for us regardless as we bailed blackfish and even established a baseline minimum size where anything of 5 pounds or less would be caught and released. Releasing tog to fight another day is a lot easier when you employ a jig and crab as opposed to a free-swinging hook and crab. The jig almost always sticks in the maw of a tog and is rarely inhaled.

While it would be impossible to actually target tog of that size, Captain Colby hedged his bets on this one. First, he was fishing a Tidaltails jig, which was developed to place a hunk of crab where conventional terminal tackle would get hopelessly tangled. Secondly, he poked around probably a half-dozen rockpiles, reefs and wrecks in Buzzards Bay before he found the right one in about 25 feet of water. And lastly, once the bite kicked in and the tog standard creeped up from a mere keeper to whitechin status, he opted for big whole crabs with claws-a-clicking!

While spinning gear is best for getting “jiggy” with tautog, don’t confuse spinning as being code for light. The skipper was using a Shimano Stradic 8000 with 50-pound Power Pro line, 50-pound fluorocarbon leader and his rod was a stout Ugly Stick Tiger.

This fish puts Captain Colby squarely into the leader position of the tautog category for the Massachusetts Saltwater Fishing Derby by a whopping 3 pounds! If you snooped around you’d also notice that the current first place winter flounder (blackback) was also taken aboard his boat, the Little Sister. But no worries; in spite of the skipper’s success with both blackfish and blackbacks, there is no need to expect a formal attire policy aboard his boat anytime soon!