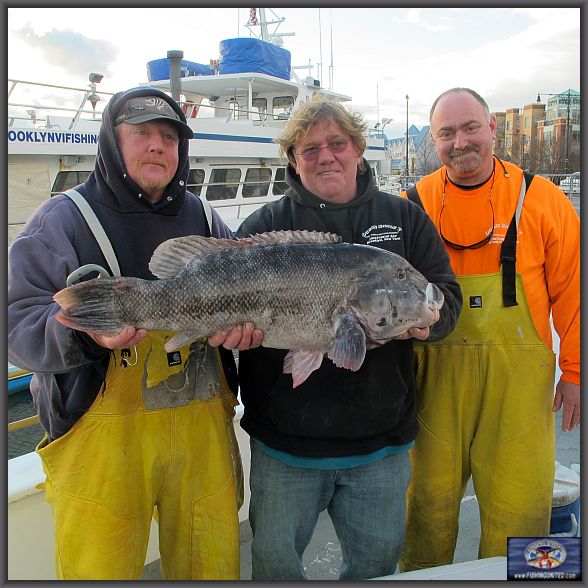 Captain Greg Nardiello, skipper of the Sheepshead Bay-based headboat, the Ocean Eagle V, knew something was different when he set the hook into a biting blackfish this past Saturday.

The monster tog hit a rig baited with white-legger crab, Captain Greg’s favorite bait for winter blackfishing. Upon feeling the hook, instead of doing the usual blackfish “bulldogging” in an effort to stay on the bottom, the fish took off swimming, taking drag. Nardiello, who’s tallied 10 tog heavier than 15 pounds, said he’d only had a fish fight like that once before, and he’d lost that one.

The Ocean Eagle V was anchored over some particularly unforgiving bottom, and Captain Greg was surprised that the fish never went into the structure. Three times, the fish bolted back to the bottom after Nardiello gained some line. Just before the third run, Captain Greg saw the enormous blackfish.

“I thought I was going to lose it after I saw it,” Nardiello said. “When we landed it and I went to take out the hook, the leader snapped.”

The fish taped out at just under 34 inches, and when an official weight was recorded at Bernies Bait and Tackle in Brooklyn, the 21-pound, 1-ounce blackfish was large enough to top the standing New York State Record.

While the customers aboard the Ocean Eagle V were enjoying a steady blackfish bite, there hadn’t been any large ones caught before Captain Greg hooked up. Steady northeast winds last week had kept the water dirty, but as the wind shifted and the waters just started to clean up, the blackfish bite picked up big time.

Captain Greg is passionate about blackfish, first targeting them commercially with rod and reel, and then captaining a party boat to introduce other fishermen to the fun of catching his favorite fish. “I love fishing for blackfish,” Nardiello said, “that’s the fish of a lifetime for me.”

For more details about the catch, check out FishingUnited.com.