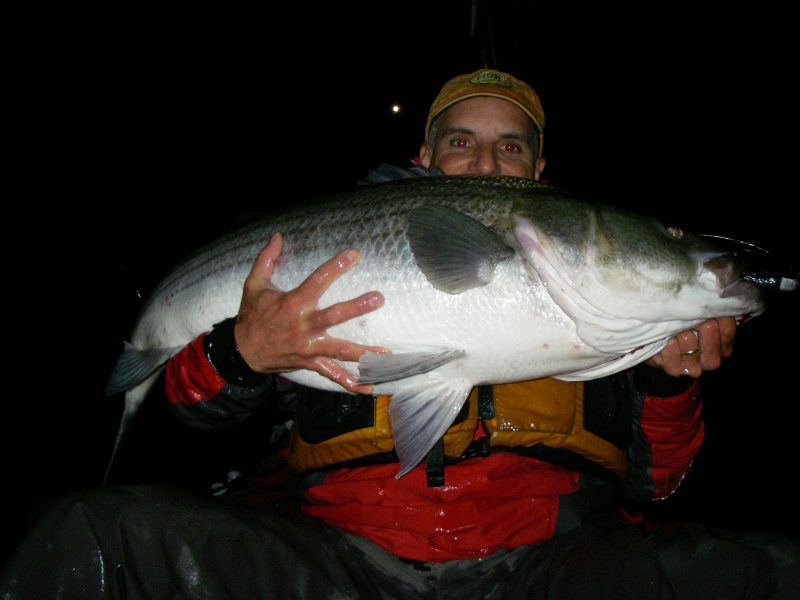 Eric Harrison has been catching some impressive stripers from his kayak fishing Boston Harbor this summer, and he’s been letting them all go. Eric wrote up this synopsis of his 2012 Striper Cup and one of his catch-and-release kayak cows. – JTF

I joined the Striper Cup this year even though I don’t keep any of the bigger bass that  I catch.  I thought it would be fun to get a few Pounder Club Pins and send in some catch-and-release pictures of the big bass I catch.  Being a kayak angler, I  didn’t really expect to be competitive with the boat guys, and once September rolls around I expect to slip off the list of catch and release anglers, but it has been fun putting up some nice fish.

I typically fish Boston Harbor and the North Shore up to Gloucester using my kayak to pull stripers out of the rocks and rips.  I’m a plastics fanatic, I use other lures, but it seems that all my big fish come on plastics and I haven’t fished bait for stripers this season.  My favorite bait this season has been the 13-inch Jigging Hogy in blamber on a 1/2- or 1-ounce jig.

One night in early June, I was working a rocky shoreline, keeping my kayak just along the edge of a drop-off, and alternating casts between working the drop-off and casting up into the rocks near shore.  I was working a 13-inch Hogy on a 1-ounce jighead along the drop, slowly swimming it back to the kayak when I felt a light tap.  The fish was coming at me and it felt small, I cranked tight and then had to reel fast as the fish came right to the boat.  In the dark I saw a small swirl on the surface next to the kayak, then the fish turned and started towing me in a tight circle.  After a minute or two, I realized that this wasn’t the 30-inch fish that I thought I had hooked!

The fish got mad and stopped dogging around the boat, making a screaming run along the rocks and attempted to rub my Hogy off on the rocks and weeds.  Fortunately I fish from a Hobie Kayak and was able to pedal after the fish, freeing my line from rocks and weeds as I went.  I finally turned the fish from the rocks and weeds and used my Mirage drive to pedal the fish to deeper water where it wouldn’t get into the rocks.   When the fish finally rolled on its side next to the kayak, I saw why I had so much trouble with it, it was 48 inches long and taped out at about 46 pounds.  We took a couple quick pictures together, then she swam off making sure to give me a splash with her big tail.  The big fish were on the prowl that night, and a 37-pound fish inhaled my Hogy a little later!

That 48-inch fish turned out to be the biggest catch and release entry for June!

The last few weeks have been good for big fish; larger bass seem to be moving inshore.  I have been sticking with plastics, as the fish move in shallow at night I have been fishing 14-inch Hogys on the Barbarian weighted swimbait hook and continue to find big fish.  I may have a tough time beating the top three fish that I have entered for the season, but I have met my goal of getting a few Pounder Pins, and had fun doing it.

And the best thing?  Those big girls are still swimming!