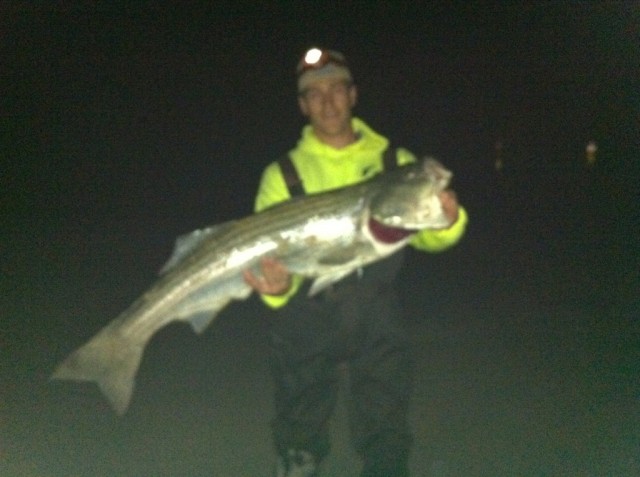 It was Sunday June 3rd of this year. I had been out in the bay (out of Sesuit Harbor) earlier that day. Figuring the keeper-sized stripers had moved on from Barnstable harbor, I poked around the Brewster flats and southern shoals of Billingsgate looking for some action. Didn’t find any. A family friend stopped by to chat as I was washing down the whaler on the trailer. He said he had been pulling fish out of Barnstable Harbor area from the shore. Checked the tides, and it was high around 11:00, so I figured I could get some extra weight in me and go hit the surf after dinner with the family.

I had a great meal at Gina’s by the sea (best part is my pops picked up the check!), got the waders on and walked down to the water. There was 5 or 6 people right in front of the vehicle entrance point on the beach chunking frozen macks. I walked about a half mile to the west where there is a bit of a point and is at the mouth of a marsh river system. The water was glass calm, the stars were dancing, and the wind was on low.

Since Chapin flats are so expansive, I could wade out about 150 yards and stay completely dry. I had a green light on my head which seemed to mesmerize the batfish around me; even snapped at them and caught a few with my hands. I first thought they were sand eels but they were some kind of minnow. I turned my lamp off and sent out my 7 in black bomber (favorite night plug). It was really a beautiful night to be alone in the water, not something I would usually do but the conditions were right for it.

I got into some pretty immediate action and on my 12th or so cast while wading to the west I got a fish. It was under 28 in, but it was in my next 6 or so casts I landed 2 more fish, definitely keeper size, and a lot of fun bringing in. eventually the tide started forcing me to move in closer to shore as it was nearing slack. I was casting across the horizon, and when I casted to my immediate left I got a big hit. The fish immediately turned out to sea and took about 50 yds. of line. This was going to be a little more of a test. I turned the drag almost all the way down on my bailed Van Staal 150. I gained some line back and then he went for another scream. I gained more line and then he came up for a jump. I couldn’t see him but I could hear him and it sounded like a cannonball dropping off the deck. I let out a loud “wahoo!” pumped up to be on a big fish.

My Gibbs mackerel pencil popper fell off the front of my waders where I had it ready to use, but more like ready to lose. I panicked and played with one hand feeling in the water while the other pulling back on the fish as I retreated by foot to keep tight. I found the popper, and just dropped it in the front of my waders, not smart. I couldn’t see the fish when he was about 10 feet in front of me and he just swam right up to my chest, giving up…beautiful fish. I grabbed his lip and tried to lift him out of the water, which was at my chest, and that did not happen. So I kept him hooked and jockeyed him up to the shore for about 75 yards. Got to the beach and as he washed up the 40-pound leader snapped. The fish started sliding back into the water but I pounced on my knees in front of him and grabbed his gill plate and dragged him up to get sandy.

I didn’t have a tape on me and really wanted to size him up so I started to carry him to where I could see another light. One of the guys heard my scream and was coming to see if I was alright. Luckily he had a tape in his surf bag. The fish measured out to 44 inches in length with a 26-inch girth, estimated between 35-40- pounds so I had my new friend take a picture, and let him go. The fish swam away healthy, and I thanked him for the fight. My biggest fish from the surf! The guy with the tape asked me what I was using, told him, and his response was “I haven’t seen a fish taken on a plug in 5 years down here!” Well, might want to stay open to change! Turns out all the fish hadn’t left Barnstable Harbor area, hopefully some big boys have set up shop for a little while. Have been back twice since, on the incoming at night, and caught more fish in the 30 in class, but no porkers. On my way home I remembered there was a pencil popper in my waders and had to carefully fish that out. To compare, I checked the Striper Cup leaderboard, and I realized this fish definitely would have placed for the shore division, so I signed up that Monday. Haven’t weighed a fish yet, but instead of heading to P-Town or North Beach this weekend, Barnstable Harbor is on the agenda.

Send your Tales from the Striper Cup and a picture to dcameron@onthewater.com and you might just end up here on the site!