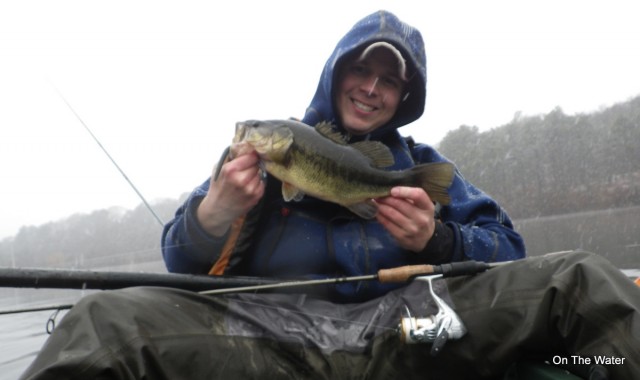 With last weekend being my first weekend off since I posted this Fishing in the Snow Report from late January, I planned on fishing regardless of the conditions. As a thick layer of slush began coating my kayak minutes after I launched on Saturday morning, I began to reconsider.

My target was largemouth bass. I’ve never really done much fishing for largemouths in the winter, but from the sound of it, if you can find a concentration of them, the fishing can be pretty fast. (I would hear later on that the trout bite was phenomenal on Saturday in some of the stocked ponds.)

My target pond was relatively small, maybe 20 to 30 acres in size, and not very deep. Mushy weeds grew within 3 feet of the surface around almost the entire pond.

On my third cast a healthy largemouth slurped up my Senko worm and got the day off to a good start.

The action continued pretty steady from there. When bass and pickerel proved to be a challenge, I rigged up a small Trout Magnet jig under a float and bailed nice-sized bluegills and yellow perch for a couple hours. I even caught a big golden shiner that, had I brought some large hooks with me, would have made an excellent live bait. At one point, a good-sized largemouth ate the tiny 1/64-ounce jig, but burrowed into the weeds on the ultra-light gear, and the hook eventually pulled.

All in all, it was a very good day and lots of fun – but I wouldn’t complain if my next weekend off had some of that mild winter weather everyone’s been raving about.