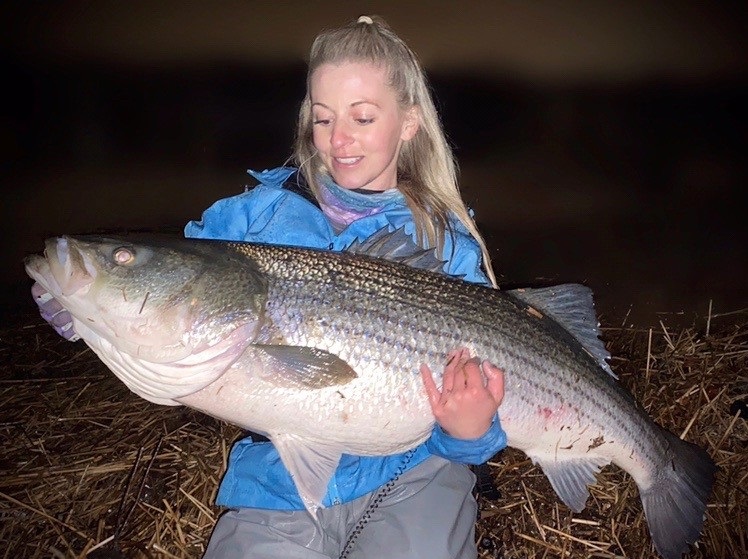 For Erica O’Donnell and her fiance, Paulie Martin, April 12 will be a day forever etched in their memories.

Pouring rain, cold, and wind made for less-than-ideal spring striper fishing conditions. O’Donnell said they weren’t planning on fishing, but they mustered up the energy and made a play west to an unfamiliar area on Long Island.

“It was very unplanned. We scoped out spots and spent several hours trying to figure out the dynamic of the area,” O’Donnell said.

After running into some crowds around sunset, they hoofed it and found their own spot in a secluded part of a bay during a storm. The legwork paid off, as the two found a consistent pick of keeper-sized striped bass on bone-colored Daiwa SP Minnows.

After 7 hours of striper fishing in waders, the tail end of the incoming tide was approaching, and O’Donnell was going through the motions, ready to make a couple more casts and head home for the night. Between the two of them, they had caught 25 fish on the evening of the April new moon.

As the wind blew from the northwest at 2 am, O’Donnell made one final cast and, halfway through the retrieve, her fishing lure got smashed by a giant fish.

“I wasn’t prepared for the fish,” said O’Donnell, who currently lives on Long Island. “I haven’t felt a fish test my drag like that before. I leaned back and couldn’t reel for several minutes at a time.”

With wet hands and sore arms and lights in the distance, O’Donnell slowly walked backwards to get line back on her fishing reel. “I was scared about tripping and falling backwards.”

After an 8-minute fight, the striper was spent, and O’Donnell was able to land the largest fish of her life, 52 inches in length, with the help of her fiance. “Paulie is the real MVP. He pulled the fish out of the water for me,” O’Donnell said.