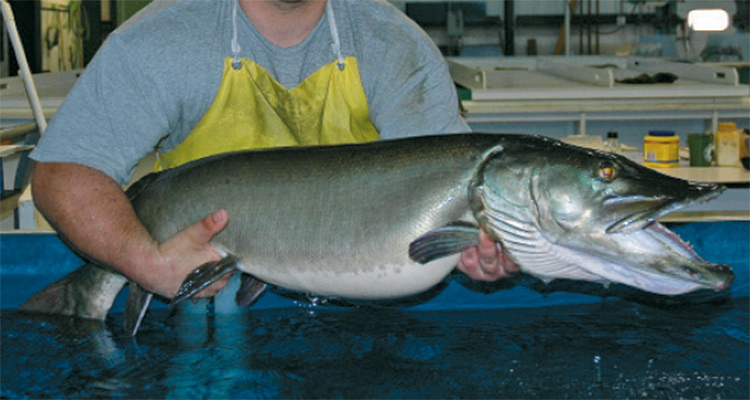 Being an avid angler and an outdoor writer from New Jersey, I tend to be a bit biased when it comes to our state’s hatchery in Hackettstown. I think The Charles O. Hayford State Fish Hatchery is the best in the country. I’ve had the opportunity to meet many of the staff, see their hard work firsthand, and enjoy the diverse and plentiful fruits of their labors while fishing all over the state.

On a recent trip up to the hatchery, I had to ask the superintendent, Craig Lemon, who we affectionately call “The Fishmaker,” if any other state is doing what our hatchery does. New Jersey is, after all, pretty small, and there would be no shame if we were not the best of the best. His response was that in terms of numbers, yes, there are states that raise more fish simply because they have larger populations. But in terms of diversity, there is no other hatchery in the United States that raises the number of fish species that we do here in New Jersey. So, it turns out I was right all along.

The hatchery has not always been the sprawling, technologically advanced fish factory that it is today. Its story began in 1911, when Ernest Napier, president of the New Jersey Fish and Game Commission, learned of the work of 22-year-old Charlie Hayford, while vacationing in Maine. Hayford had been successful at doubling production at a New England hatchery while cutting overall costs. Thoroughly impressed with the results, Napier made arrangements for Hayford to visit New Jersey and assist in starting a hatchery here.

The hatchery quickly found a home at Roberts Farm in Hackettstown, with 100 acres of land and a fresh supply of cool spring water. Hayford was named as the hatchery superintendent, a title he would hold for the next 45 years. The project began to come together, and construction began in May of 1912. By December, the two main hatchery buildings were completed, just in time for the arrival of 100,000 brook trout eggs.

From these first trout, the Hackettstown Hatchery underwent numerous changes in the following decades, all while keeping a focus on raising brown, rainbow and brook trout. In 1972, test wells dug at the Pequest Rearing Station showed promise for a new hatchery. Construction began on The Pequest Trout Hatchery in 1978, and in October of 1983, a headline in the Sunday Register read, “Hackettstown Truck Makes Its Final Trout Run.” Starting that spring, just nine miles away from Roberts Farm, all New Jersey trout would be raised at the new Pequest location. The hatchery at Hackettstown then embraced new technologies for rearing coolwater and warmwater species.

Lay of The Land

Standing atop the hill by the gated entrance to the Hatchery, it looks unimpressive. There are two main buildings that can be seen from the private road, and a couple ponds visible below. What you don’t see, and what I didn’t see until I hopped into Lemon’s Kubota, is the sprawling network of ponds, drainage ditches and makeshift bridges that unfold beyond the trees. It’s massive! Were it not for the company of Lemon, I would have easily gotten lost.

The original hatchery structure still stands, and was used for rearing fish until 1999. After that, fish production shifted to the newly constructed, state-of-the-art intensive fish culture building.

When I visited this past July, this centerpiece of the hatchery was teeming with life. Huge tanks held thousands of northern pike, hybrid striped bass, true strain and tiger muskellunge, and landlocked salmon that were all to be released in the coming months. The tanks are kept clean and temperature controlled by an intricate network of boilers, pumps, filters, and hoses. The room that holds this equipment would make a more-than-comfortable one-bedroom apartment.

In the ponds below, I watched staffers net buckets full of fathead minnows to feed to fingerling walleyes scheduled for stocking the following week. In other ponds, there were channel catfish pushing the 12-inch mark, destined for a fall stocking as part of a recently introduced program. Ponds holding broodstock largemouth and smallmouth bass, muskies and pike are also scattered across the property. These backup muskies and pike are held for the years when trap-netting lakes do not ice-out in time for the spawn.

In 2015, the hatchery raised 14 different species of fish that were stocked into hundreds of New Jersey waters. In addition, Hackettstown provided fish and fry to Connecticut, Massachusetts, Virginia, Pennsylvania, and New York. State hatcheries work together, and the fish that are picked up by other states are generally surplus that cannot be raised in New Jersey. But the fact that our tiny state is assisting in so many other stocking programs is an incredible testament to its success.

As you might expect, cultivating such an enormous number of fish is quite an undertaking. It would be reasonable to think that raising over four million fish requires the work of a small army. But, in fact, there are only six full-time and five seasonal workers at Hackettstown. This crew is responsible for the entire “fish-making” process, from egg to stocking. Each species requires specific rearing methods, each with its own intricacies and challenges.

Some species, such as channel catfish and largemouth bass, have sexually mature “broodstock” that are held in ponds year-round. Channel catfish lay and fertilize their own eggs in barrels placed by hatchery workers in the broodstock pond. Each year at spawning time, the pond water level is lowered a few feet and hatchery workers wade in to collect eggs from the barrels, hoping the defensive adult isn’t in the barrel at the time.

To produce other species, adult fish must be collected from local waters. Each spring, northern pike, muskellunge and walleye are trapped in nets, milked of their eggs and sperm, and then released back into their home waters. This trap-netting is an integral part of fish production at the hatchery, but also a testament to the health of the existing fisheries. In four days of setting nets at Spruce Run Reservoir, 18 northern pike, averaging 24.8 inches, were caught. In seven days of netting at Greenwood Lake, 34 muskellunge were caught, with the largest measuring longer than 48 inches. An incredible 163 walleye were caught in eight days of setting nets at Swartswood Lake.

Fishing At Its Finest

Every year, anglers in this state catch walleye pushing 30 inches, northern pike over 40 inches, and muskies over 50 inches. Those are incredible fish anywhere in the world, and especially when you consider how far the Garden State is from the native range of these species.

Hybrid striped bass fishing at Spruce Run Reservoir, Lake Hopatcong and, more recently, Manasquan Reservoir, has become one of the most beloved freshwater fisheries New Jersey. Those who have tied into a “rocket bass” at any of these holes are well aware of how exciting these fish can be. The first hybrid striped bass stocking was done by Lake Hopatcong’s Knee Deep Club in 1984 and, since then, the Hayford State Fish Hatchery has taken this fishery to world-class levels in the last decade.

It’s also important to keep in mind that being a densely populated state, our lakes, rivers and ponds are subject to much more fishing pressure than in other parts of the country. Without question, on many waters, particularly in suburban and urban areas, natural fish reproduction would not be able to withstand the fishing pressure. These waters, like many near my home in Union County, are completely dependent on the hatchery for future generations to enjoy the thrill of catching bass, sunfish, and catfish.

In mid-November of 2015, I took a father and his son fishing for muskies on one of my favorite New Jersey lakes, a lake that has a healthy population of tiger and true strain muskellunge as a direct result of the work done in Hackettstown. The two drove up from Maryland after contacting me through a friend. Their mission was to fill a vacancy for the IGFA small fry record for tiger muskies. I am not a guide, but I’m always willing to volunteer for a worthy cause, and I like to teach the next generation how to fish when I get the opportunity. Plus, I’m a writer and thought it would make for a cool story if we succeeded. So, I took Shawn McCardell and his son, Ryley, for a friendly day of fishing to see if we could catch a 1-pound tiger muskie that would meet the minimum qualifying weight for an IGFA record. We had all the paperwork, measuring and weighing tools needed for catching, documenting and releasing a record fish.

I distinctly remember Shawn mentioning that the IGFA small fry record for a true strain muskie was 27 pounds, but I quickly acknowledged it was not really within the realm of possibility. However, after a somewhat eventful morning that showed promise of catching a muskie, 9-year-old Ryley came out on the receiving end of one of the largest muskies I have seen caught in New Jersey. We measured the fish at 53 inches, and had we weighed it, it would have easily crushed the IGFA small fry record. Unfortunately, due to the chaos that often ensues when a fish like this strikes, my hand wound up on the rod, which would have ultimately disqualified it for a record. Instead, we opted for a couple of photos and a quick, safe release without getting a weight. There was no disappointment, and the smile on Ryley’s face was priceless.

I frequently talk to Craig Lemon at the hatchery, and one thing he always asks me for are pictures. For a while, I didn’t quite understand why pictures were so important. When you’re standing in front of the dozens of tanks in the main building of the hatchery, it’s hard to imagine that a 3-inch muskie born a few weeks ago could one day turn into what we caught last November. For Lemon and his crew, the fact that their work puts smiles on children’s faces is why they come to work every day, and why they love it so much.