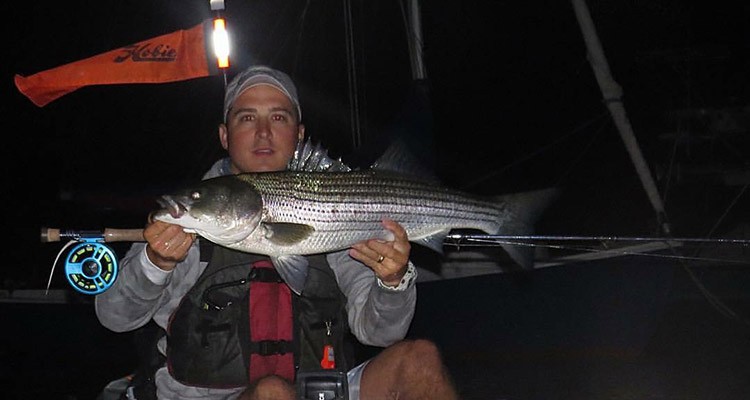 Pictured above: Joe Gugino won the Fly division with this 33-inch bass

This past weekend, the New England Kayak Fishing (NEKF) Striper Shootout was held in Salem, MA. Drawing in 150 kayak anglers from all over the East Coast, the tournament featured camping, camaraderie, and of course striper fishing! Tournament participants were not only blessed with good weather, but also with good fishing. Not every fish was big, but most anglers reported good success and tournament winners posted some large bass.

This was the 12th time the tournament has been held and it was headquartered at Winter Island in Salem, Massachusetts. Winter Island provided the kayakers with a great campground and easy access to the water. Tournament participants were allowed to fish in a 30-mile radius around Salem. Participants competed in one of five divisions: Open, Artificial Only, Fly, Winter Island, and Youth. The Winter Island division covered those who launched from Winter Island only.

NEKF is a non-profit club that raises money for charities. This year tournament director Eric Watson was focused on raising money for the Make a Wish Foundation; his goal was to raise enough money to fund a wish. Between entry fees and raffles, the tournament expected to raise well over $5,000 for the foundation! The tournament sponsors included, Hobie Kayaks, Wilderness Systems, YakAttack, Tomo’s Tackle, Hogy Lures and many others.

The tournament is a catch, photo, and release format; all fish entered were released. For ties, the tiebreaker was the second biggest fish caught by the angler.

In the open division, big fish were caught by a variety of methods; chunk bunker, tube and worm, and live eels all put fish on the boards. The top finishers in the open division were:
1. Mike Baker 46.5″
2. Mark Cicerano 44″
3. Bob Bernard 42″

The Artificial Only division produced some monster bass, all were caught on plastic. The top 3 anglers were separated by a half inch and had to be decided by a second fish.
1. Carl Vonnegut 48.5″
2. Eric Harrison 48″ and 48″
3. Luis Santanilla 48″ and 40″

The Fly division was competitive with the long wanders producing many fish, but legal ones were hard to come by!
1. Joe Gugino 33″
2. Matt Zimmerman 31.5″
3. Drew Haerer 26″

The Winter Island division was dominated by visiting anglers from New York. They got out and successfully explored new waters, landing quite a few nice fish along the way.
1. Bob Bernard 42″
2. Dennis Glynn 36″ and 31″
3. Tom Conway 36 and 28″

There were quite a few entrants in the Youth division, NEKF is very supportive of kids in kayaks and the division grows every year.
1. Sasha Callaway 27″
2. Catherine Zhang 25.5″
3. Jolene Read 25″