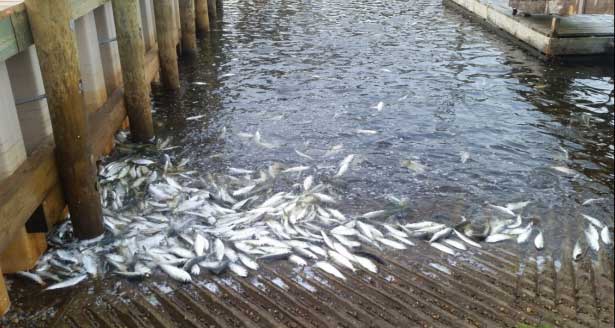 A collaborative study between the Department of Environmental Conservation (DEC), the Suffolk County Department of Health Services (SCDHS) and researchers at Stony Brook and Cornell Universities has identified the multiple causes of three separate fish kills in the Peconic River in summer 2015, the DEC and SCDHS announced today.

The study (PDF, 3.7 MB) found that rising water temperatures and a spike in algal blooms fueled by increased levels of nitrogen caused low levels of dissolved oxygen in the river, which is ultimately believed to have caused mass asphyxiation among the menhaden population. Several additional factors also contributed to the kills, including a large population of predatory fish blocking the mouth of the river, essentially trapping the menhaden, and the presence of a virus among the fish.

“Collaboration between all levels of government and academic institutions is critical to identifying the true causes of unfortunate incidents like this,” said Acting DEC Commissioner Basil Seggos. “DEC will continue to work with all partners to identify additional strategies to improve water quality in the Peconic River and restore the health of this ecosystem for the fish and other wildlife that depend on it. We will be on the lookout this coming summer for a similar confluence of factors.”

“These results of algal blooms and mass asphyxiation truly indicate that excess nitrogen is indeed polluting our water, and we need to continue to upgrade our wastewater treatment infrastructure,” said Suffolk County Executive Steve Bellone. “I applaud all the government agencies, including the DEC, for being proactive in this effort to address mass fish kills. Suffolk County will continue to work with all of our leaders at every level of government to help combat this problem that affects our water quality, environment, economic development and overall quality of life.”

The fish kills occurred at three different locations along the two-mile tidal portion of the river between May and June of 2015 and resulted in the death of roughly 300,000 adult Atlantic Menhaden. The highest concentration of dead fish was reported near the mouth of the river off Indian Island County Park and in the waters between County Route 105 Bridge and the Riverhead Yacht Club.

The multi-agency effort employed extensive monitoring at nearly a dozen sites along the river to document existing physical, chemical and biological conditions that may have been associated with the events. Data on historical water quality conditions as well as past fish kills was also examined to provide possible clues to the occurrences. Menhaden specimens were also sent to the Aquatic Animal Health Program at Cornell University’s College of Veterinary Medicine for a pathology examination.

SCDHS discounted the possibility that illegal discharges, spills and/or the presence of toxic substances were contributing factors. Researchers from the School of Marine and Atmospheric Science (SoMAS) at Stony Brook University also analyzed water samples to characterize the phytoplankton (micro-algae) community in the river and determined that harmful algal blooms (HABs) were impacting the fish.

Although the Peconic River has had fish kills before, the 2015 event was unique in the timing and intensity of the algal blooms. The spring 2015 algal blooms were more intense and the oxygen decline occurred much earlier than usual. Combined with rising water temperatures and an unusually large biomass of adult menhaden confined in the river, these factors resulted in prolonged periods of extremely low dissolved oxygen (DO) levels, ultimately leading to mass asphyxiation among the fish population.

Two other secondary factors may have contributed to the fish kills. Exposure to the harmful algal blooms caused damage to the menhaden’s gills and may have exposed them to a virus. The presence of a large population of aggressive carnivorous blue fish at the mouth of the river blocked an escape route from the oxygen depleted waters.

Experts believe that discharges of nitrogen into the Peconic River have increased algal blooms over the years. State and local agencies involved in the study are working aggressively to advance nitrogen reduction efforts throughout Suffolk County.

Suffolk County recently signed an inter-municipal agreement with the Town of Riverhead to begin a pilot program to test facilities with sanitized wastewater discharges. The County also awarded the town $8 million and the state provided more than $18 million in financing to upgrade its Advanced Wastewater Treatment Facility, including the construction of a new sewage treatment plant to meet increased standards of nitrogen removal.

The state has also secured grants from the Environmental Protection Fund (EPF) to reduce wastewater nitrogen pollution in the economically important Peconic Estuary watershed, including $580,000 to the town of Riverhead to connect cesspools to a public wastewater treatment facility and $1 million to Suffolk County to construct a decentralized wastewater treatment facility to treat waste from five mobile home parks that are currently using cesspools.

Officials on Watch for Repeat Conditions in Summer 2016

All partners involved in the study will continue to monitor the river for repeat events in Summer 2016 and beyond. Residents are encouraged to immediately report any observations of large fish kills to: