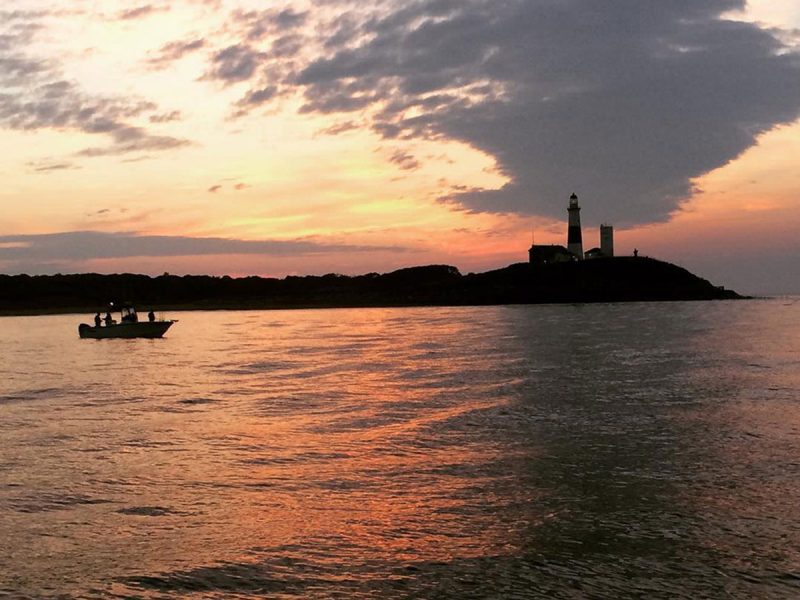 Catching three 40-pounders in four drifts sounds like a pretty good fish tale. If the setting had been anywhere other than that magical body of water between Montauk and Block Island, not one angler would believe it. Yet, when the setting is a full moon shining over Block Island Sound, most will stick around to hear the whole story.

Captain Tom Mikoleski of Grand Slam Charters posted a last-minute open-boat trip in late June of 2014. Fishing was good, but the season really hadn’t seen what Montauk’s waters usually hold. In his typical fashion of making reports and not waiting for them, Captain Tom said that the late June full moon was one of the best of the year. He was leaving at 4 o’clock, and it was going to be a late night.

Heading into Fourth of July weekend, I could have flown to Boston and back in the time it took to drive 40-odd miles to Gone Fishing Marina. Thanks to a line at the dock gas pump, I got on board and we headed out on what would be one of the most spectacular nights of fishing I’ve ever experienced.

We started at The Point and had a steady pick of 15- to 20-pound fish. As the sky darkened, the ounces of lead increased and the bites were more frequent. Drift after drift brought up fish, fish I was happy to land. However, a deepening frown at the helm made it clear we had only scratched the surface of what Captain Tom knew a full moon was capable of.

Fishing live eels with 10-ounce sinkers just off a rocky bottom calls for focus. Snagging a rig on a short drift in a 3-plus-knot tide takes you out of the game, and we were late in the fourth quarter from when we had started fishing.

I figured I had lost my focus and snagged the bottom on our first drift. When the bottom tugged back at my first attempt to free up, well, it took my breath away. The best fight I’d had with a striper to date ended the way I think all of them should—everyone yelling as the net came over the gunnel, handing my phone to a buddy for a frame-worthy picture, and then watching the fish swim away.

That same story played out two more times in the next three drifts. Had I not let excitement get the better of me, I probably could have gone four for four. 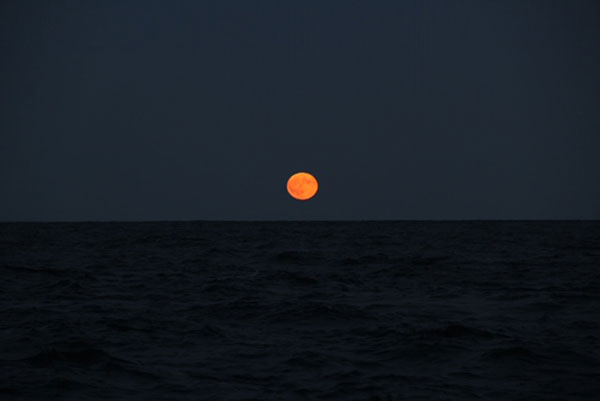 Full moon fishing in Montauk is probably one of the best inshore fishing scenarios in the Northeast. It is responsible for most personal bests by the anglers who have fished those moons in Montauk. The moons and the fish raised by them will put anglers, their gear, and the captains to a test of wills at times.

Montauk may be famous for blitzes, but eeling on a full moon is an entirely different situation. Fish are not blindly chasing anything thrown at them. There are no birds working to clue anyone in on where the fish are feeding. While the usual spots are common knowledge among newbies and salties alike, being able to navigate through thick boat traffic and set up (and stay on) a drift that passes pockets of fish takes a special skill set acquired over an infinite number of tides and moons.

Presentation is everything. Tide stage, brightness, and position in the water column is the difference between an epic night or getting back to the dock questioning why you cleared the calendar back in January for a July night of fishing.

Captain Joe Wenegenofsky of Bloodline Charters in Montauk makes gear adjustments according to how bright the moon over the fishing grounds is shining. He predominately fishes a three-way rig while drifting for stripers. On a clear moon night, though, he switches to a fish-finder rig in slower stages of the tide.

“I can send the eel way back and not spook the fish with the boat’s shadow.”

Clocking in at close to 4 knots, a ripping full-moon tide is not something big stripers are going to fight. Captain Joe pointed out that the fish will move out of the way for a passing sinker. When fishing in a strong tide, there’s little choice but to use a three-way rig to keep your eel close to the bottom. Using a 10- to 15-foot leader in this situation works twofold. It gives the bass a chance to get back into its feeding lane after being spooked by the sinker. Like the fish-finder rig, it also allows the eel to be out of the shadow of the boat.

Night isn’t the only time stripers from 30 to 50 pounds feed, but they do tend to chew a lot more in the dark. One of the most effective methods of catching big bass is trolling, but only during the day. Umbrella rigs, mojos, and employing the “Montauk Sweep” (holding a rod reel up over your shoulder like a pole vaulter and jerking the rod downward over and over) with an oversized bucktail on wire line have all claimed jumbos, many of them hitting the deck of November Rain Charters with captains Steve and Jill Ruiz. From hardcore fishermen to first-timers at The Point, jaws drop when the last few cranks of the reel reveal what’s been pulling so hard on the other end of the line. In a perfect world, the weaker stage of the tide coincides with a typical half-day summer trip. As Captain Steve can attest, it’s not always the case. Speed adjustments are constant, and flexible sail times agreed to by their fares are often welcomed to work around the screaming tide cycle.

Just as moonlight and a strong tide can present obstacles, too dark of a night brings up a whole different set of problems. There are a lot more people fishing these days, and a lot more people on social media are seeing the fish being caught. Montauk has been much more crowded in the summertime the past few years, and it’s not just the lines to get into Surf Lodge or Sloppy Tuna. The large number of boats that fish at night on a full moon has grown exponentially in recent times. Your eyes can play some real nasty tricks on you in the dark at The Point, so working your way through traffic is not for the faint-hearted. Luckily, tragedies have been seldom, but close calls plentiful.

Many captains, including Paul Bruno of Elizabeth III, had never seen such crowds a full moon gathers at the point until the past few years. The June and July moons were rarely looked upon for lights-out fishing—the prime moons that anglers in the know salivated over were in the early fall. In the past five years, however, bookings for nights around and on those moons happen six months in advance.

The days of fall full-moon bass blitzes pale in comparison to the glory days – days, unfortunately, I’ve only read and heard about. If you could cast a diamond jig, a Deadly Dick, and a popper, you had a pretty good shot at a Montauk Slam (false albacore, bluefish, striper) on any given fall day. The albies are still there and (except for some mysterious reason last year) the blues are around. The bass continue to make an early exit, though, as witnessed by Captain Paul and other Montauk captains. A quick Google Images search of Montauk fishing leaves no doubt that the population of stripers isn’t what it once was. What’s now looked upon as a trophy catch used to be just a catch, and it really wasn’t all that long ago. Certainly, migration patterns evolve, but I just can’t wrap my head around that as the only reason for fall runs being a shadow of what I’ve heard they can be. 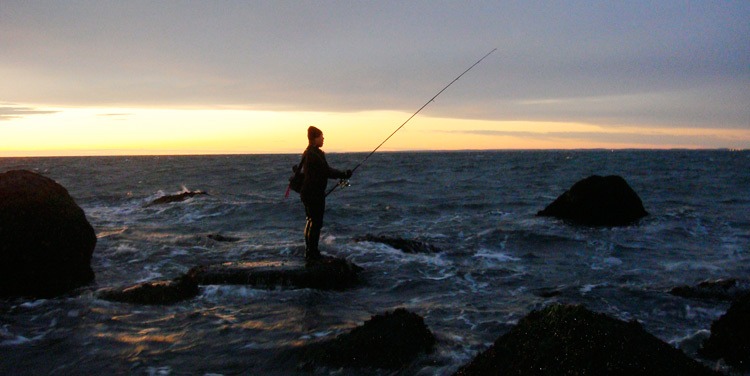 When the moon over Montauk gathers fish and fishermen alike, it’s truly a magical time. Making the most of that time is key. Be flexible. Plan your trip around tides and not time, when possible, as the difference of even 1 knot of tide can be a gamechanger. Use circle hooks instead of J-hooks. It is tough to forego a hookset on a 40-pound fish; however, your ratio of hookups will undoubtedly increase with circle hooks. It’s also going to decrease gut hooks that are responsible for higher rates of catch-and-release mortality going on in our fishery. Gauge your gear for the task at hand. I’ve brought my own rod out to Montauk, and more times than not, it’s stayed safely tucked in the back of the truck. You won’t find a better-outfitted fleet than one for hire in Montauk. From the line to drag washers and everything in between, a fish is rarely lost because of equipment failure. When fishing your own gear on a private boat, take an honest look at the task at hand. You’re not going to turn a bass with a setup that’s not up for the job.

Whether it’s your 1st or 50th moon in Montauk, the thrill is just the same. The fish of a lifetime is most likely taking refuge from the tide behind a boulder, lying in wait to give battle like none you’ve ever imagined.