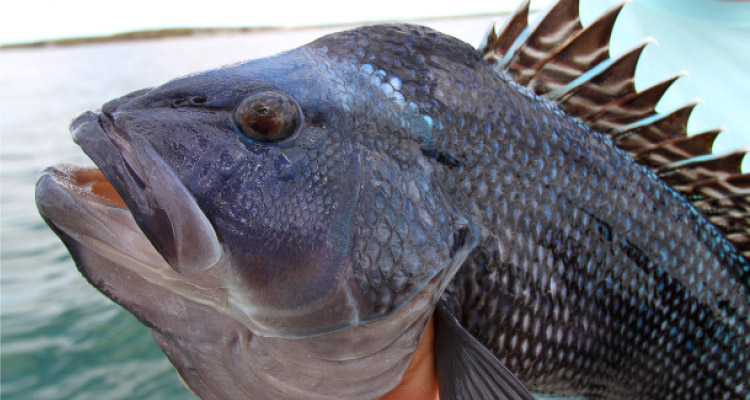 Big sea bass and porgies fly under the radar at The End of Long Island.

I make reference to the Paul Simon song in order to make a point about the many options available to boat anglers in Montauk’s waters. Of course, the surf is famous for its fall runs—as are the rips just a few casts beyond the lighthouse—but it’s the bottom fishing I’ll be applauding today.

I’ve bottom-fished at Montauk many times, mostly for fluke, but I’ve also plied Cartwright for giant sea bass, Block Island for pollock, cod, flounder, and blackfish, just off Culloden Point for spring porgies, and at the buoy just outside Lake Montauk for baseball bat whiting (a long time ago), just to name a few.

As many bottom pieces that are available to anglers at Montauk, there are also that many productive tactics that bottom fishermen have to choose from. Anchoring near wrecks, rock reefs, and gnarly lumps is the most popular approach, but some captains, including Tom Mikoleski of Grand Slam Charters, prefer to drift. Since I love to pick the minds of experienced captains, of course I asked him why.
“When you anchor and chum, you attract too many pest fish and small fish for my liking.” He continued. “As we drift broad flats and we’ll move in and out of schools as we go.”

Captain Tom is very knowledgeable about the habits of Montauk’s bottom fish, and I’ve always been a guy who enjoys learning from experts about how they prefer to do things. So, I urged Tom to explain further by asking a series of, what I’m sure were, annoying questions, such as why are we fishing at this spot, what kind of bottom is it, and how big are the fish? I guess all captains are used to being battered with questions, and they usually take it in stride.

“I like to drift at places that have scattered rocks and shellfish clumps, but not rugged enough to hang up on every drift and lose rig after rig. Retying takes time and I’d rather catch fish than constantly tie on new rigs. Getting hung up kind of takes the steam out of my enthusiasm, too. We may lose a few rigs on the drift, but nothing we can’t cope with.”

We set up our drifts on the flats north-northeast of the North Rips, and it didn’t take long before fish were rapping at our clam baits. The first fish up was a sea bass, barely 6 inches long but expressing the predatory gusto of a fish three times that size. The aggressiveness of sea bass is one of the characteristics of the fish I admire. Sea bass aren’t shy about hitting natural baits, diamond jigs, bucktails, and soft plastics, and the boldness of the little ones amazes me. We caught so many of the tiny sea bass that at times they were annoying, but it was good to see proof of a really big year class. In fact, I also found them in Long Island Sound from the Throgs Neck Bridge to Eaton’s Neck. I hope they’re still around in a few years.

Sea bass are hard-fighting fish, they don’t seem to have much quit in them, and they can grow to 10 pounds. Catching lots of large sea bass would bring me back a few decades.

As a kid I often fished for sea bass and porgies in Peconic Bay and Long Island Sound off Southold. My friend Jimmy and I were angling novices with a limited arsenal of knowledge, tackle, and skill, but we loved fishing and there were so many fish then that our limited tools and skills were not a significant disadvantage. We caught bushels of 3 to 5-pound sea bass, and 3-pound porgies were common, too. At the time we didn’t know that in the future, greedy anglers would harvest too many fish and misguided bureaucrats would mismanage so many of our precious fisheries resources.
Happily, porgy stocks began to rebound in the 1990s and for the first years of the 21st century, sea bass are also staging a substantial comeback. It’s good to see several of the more important fish of my youth become abundant again.

A Bit of Mystery

One of the stimulating aspects of bottom fishing at Montauk is that you never know what you might catch next. Drifting on the flats we caught sea bass, porgy and a few small blackfish, but fluke and flounder aren’t out of the question depending on the season and terminal tackle used. I’ve even heard of a few black drum coming out of that stretch of water.

It wasn’t long before we began hauling porgies aboard Mikoleski’s Grand Slam. The late Scott Simons, a Montauk bottom-fishing devotee, would say to me that “if porgies grew to be twenty-pounds, nobody would fish for striped bass.” There’s some truth to his pronouncement. Of course, we would always fish for stripers, but the choice to fish stripers or porgies would be a lot tougher. Porgies are brazen and feisty. They put up a dogged fight and fishing with appropriate tackle allows them to shine on the hook. On this trip, we fished in deeper water, over rugged bottom, and in current that demanded heavier tackle than I would use in the western Long Island Sound or Peconic Bay. Nonetheless, our “Montauk” tackle bent hard to these big “pork chops.”

As we drifted and caught fish, we discussed the comeback of the sea bass and the productivity of these flats. I admitted to being curious why stripers weren’t on the flats sucking up small sea bass. It seemed to me to be a natural and easy feeding pattern for stripers that prowl not far away. None of us could explain the lack of stripers, except to offer that perhaps drifting bucktails across the flats at night might be a successful technique for catching stripers and probably some huge sea bass, too.

It was Tom who mentioned the possibility of catching more species than porgies and sea bass. To demonstrate, he added a teaser about a foot above a bucktail and began drifting this combo. On the first drift he caught a sea bass on the bucktail, and a short fluke on the teaser.

The Captain, of course, has a variety of rod and reel combinations on board to cover fishing for everything from stripers to porgies. His choice on this day were 6½-foot, medium-action rods that accept a stout bend from a healthy porgy or sea bass, yet don’t over-power them. This tackle also allows the angler to feel and maintain contact with the bottom. That’s important because deep, swift water requires heavier sinkers (we used 6 to 8 ounces), and the weight of the sinker overwhelms light tackle. Heavy sinkers take all the flexibility out of a soft rod so that when an angler attempts to lift and lower the sinker in order to maintain contact with the bottom, the rod bounces so much that it’s hard to tell the difference between bottom, a hit, or simply the limits of the rod’s flexibility. It also becomes difficult to set a hook. Line selection also has an impact on managing bottom and hook-setting. That’s why Tom likes the sensitivity of 20- to 30-pound-test, no-stretch braided line on his bottom fishing reels.

I used my own tackle on this trip—a 6½-foot medium-action graphite boat rod that I find is very versatile. I use it in many fishing situations including diamond jigging and bottom fishing. I have a Shimano Calcutta 400 on that rod and it’s spooled with 20-pound-test Sufix Performance Braid. Yes, there are times I’ve thought about 30, 40, or even 50-pound braid for the reel, but it takes a lot of force to break a well-tied knot made with 20-pound test braid. After all, I don’t want to be pulled overboard should I get snagged on bottom. Of course I jest, but seriously, 20-pound test has held me in good stead so far.

There are many styles of terminal tackle used by bottom-bouncing fans. My years spent fishing with talented and productive bottom anglers has taught me that the best fishermen prefer the simplest rigs. Some use two hook rigs, while others prefer a single hook. On this trip we used high-low rigs made with 1/0 beaked hooks and 30-pound-test leader material. We used no hardware that might catch weed or rugged bottom, rather made direct ties to hooks and sinkers. Some bottom anglers use a light monofilament line to tie a loop knot for the sinker attachment. In this way, should the sinker become snagged, the lead is lost but the hooks are retrieved.

Any bottom fisherman, who reads the fishing reports to keep up on the seasonal progression and patterns of bottom fishing, is aware of the impact of strong moon currents on success. Strong moon tides may inhibit the fishing in a variety of ways although no one knows for certain why fishing is best off the moons. However, we can speculate that powerful currents disperse the fish’s food, make it more difficult for them to feed and avoid predators, and might change the energy ratio between food and swimming. We can also guess that it’s easier for bottom dwellers to ease out of the rips into deeper less agitated water at the height of current strength and then move up onto their feeding grounds when the current slacks. So, on moon tides, anglers intent on fishing for bottom species usually fish during the last hour or so of one tide, into slack, and the first hour or so of the next tide. Anglers seeking to avoid the strength of moon tides can also opt to fish appropriate areas on the south side of Montauk where currents aren’t as strong. Swift currents that disperse bait and fish may also inhibit feeding competition, and competition for food enhances the success of recreational fishing because a competition mode makes fish more active, less wary, and more aggressive. In short, they are easier to catch.

Although we spent most of the tide fishing on the flats away from of the North Rips, we also plied a few other spots trying to find a few very large sea bass. Happily, we succeeded in our quest at the Porgy Hump, a spot well known to Montauk bottom fishermen, but we also drifted the waters at the Sanctuary. Still, it’s important to keep in mind that other rugged bottom areas will also produce quality pork chops and sea bass on occasion. So, local anglers frequently develop spots that are off the beaten path, and although they may not produce numbers of fish or giants by Montauk standards, they are great aces in the hole for weekends when the usual bottom spots are overrun and over-fished. Scott Simons had a few of these places and saved our day when the better-known spots were being pounded. Don’t ask me where these spots were because although we were friends, Scott kept their exact locations to himself and I didn’t mind because we caught lots of fish. Sure, there were a few on the south side and a few on the north side of the point, but we didn’t have GPS numbers then, and after so many years I don’t even remember how deep the water was. Anyway, for a Montauk interloper such as myself, it seems like I’m always fishing in water that’s 35 to 65 feet deep.

Don’t Take It For Granted

I get the feeling at times that Montauk anglers take the bottom fishing for granted in favor of stalking stripers, drifting for fluke, and hunting offshore species. That’s easy to understand, given the glamour that comes with catching a trophy striped bass, the mania of hooking up with a double-digit fluke, or the attraction of hard-charging tuna and big sharks, but don’t forget that bottom fishing at Montauk for fast action and great eating.