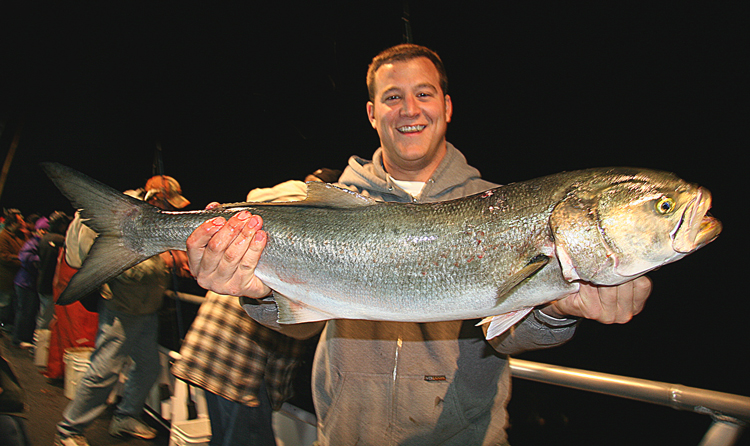 On most summer nights, beachgoers can look out and see a parade of lights flickering on the edge of the dark horizon. The source of those lights, miles offshore, is the nighttime bluefishing fleet. From June to August, private and party boat anglers are provided with hours of fast action thanks to schools of voracious choppers. As anyone who has been on a “Night Blues” headboat trip can tell you, it’s flat-out fun with screaming drags, hootin’ and hollerin’ and plenty of arm-numbing battles into the wee hours of the morning.

To get the most out of a night of summer bluefishing, gather up a few cronies and hit one of the many party boats that target the wily beasts from June through August. Though private boaters can easily take part in this fishery, for your money, the party boat is the way to go. Yes, it can be a little close for comfort if the boat is sailing at full capacity, but you save money on chum, bait and fuel. Party boats generally head out a little bit farther to find their night quarry, and spots from 8 to 15 miles off, such as the Barnegat Ridge or the Mud Hole, usually attract the fleet.

Bluefish seem to gravitate to the 80- to 100-foot depths during the nighttime hours, though they can really be found at any depth where there is an underwater ledge. Once the captain marks the bait and sets up a chum slick and the bite gets going, it rarely slows down. About the only time summer bluefishing does take a nap is during the full moons in July and August as the alligator blues go on the spawn and sometimes will shut their mouths for a 3- or 4-day period. For the most part, however, the bite stays hot throughout the summer.

A smelly, stinky chum slick is the key to bluefish bombardment. As the slick of ground and chopped bunker gets doled out, blues will hone in on it and feed for hours at a time, as long as the slick keeps running. Bunker is the usual chunk bait of choice, but at times even bluefish get picky, and butterfish or sardines may be the trick to get them in feeding mode again. Honestly, it isn’t rocket science to catch a mess of bluefish on the chunk, but there are ways to increase your odds of having the high hook, winning a friendly bet or claiming the party boat’s pool money. A simple wire leader and a 5/0 or 6/0 baitholder hook will be fine to hold a chunk. Circle hooks are frowned upon, as bluefish will serrate the line before the hook has a chance to set, so leave the circle hooks for striped bass.

To make the best bunker chunks, make a simple perpendicular cut across the mid-section of a bunker, creating a bait that is 3 inches wide and 4 inches long. Hook the chunk below the backbone and out the other side, so that the backbone keeps the bait from being ripped off the hook. Bigger chunks will entice larger fish of 15 pounds and up most of the time, but if you simply want to load the cooler, you can downsize chunks and appeal to the 5- to 10-pound bluefish. Chunking is a great way to bring somebody new into fishing as the sizzling runs and great battles provide for plenty of excitement. This is also a prime opportunity to teach new anglers the basic technique of chunking for tuna as well as other angling endeavors.

The key to making your chunks work for you is to use the current in your favor. Chunks should be sent back into the slick in free-spool, drifting at approximately the same depth and speed as the bits of chum being doled out. This may mean adding or subtracting weight to the line. Egg sinkers from 1 to 8 ounces may need to be threaded on the line above the barrel swivel to keep the bait in the bluefish’s buffet zone. Listen to what the mates are recommending for weight, as sometimes, you may not need any weight on the line if bluefish are feeding up high. When a blue takes the bait, give it a 3-count, engage the reel, and set the hook. And if you are taking somebody out for their first time, bring the camera to capture the expression on their face when the rod doubles down and the monstrous fight ensues!

Believe it or not, there are times when the blues get finicky, and though the fishfinder may be showing schools of voracious blues, they simply keep moving in and out of the slick, with only a few being hooked up on chunk baits. That’s when it’s time to switch to a metal jig. You don’t need to break out your coveted butterfly jigs or $20 cod jigs to hook into blues, but employ the use of the tried and true, blue-collar Ava jigs to take the abuse. Generally, size A27 to A87 jigs will fit the bill depending on the current. In jigging, as compared to chunking, that jig must be working straight up and down, and jigs will be less effective with a big bow in the line, so use a jig heavy enough to maintain a vertical presentation.

If the captain marks fish at a certain depth, drop down to that level first to jig, but if you are trying to find the fish, start by dropping straight to the bottom, reeling in four cranks and sweeping the rod upward. Give it a good 30 seconds, then reel up another 4 or 5 cranks, and repeat until you find the depth where a strike occurs. Try to remember how many cranks off the bottom your jig was when it got hit, and repeat that process. Jigging is a more proactive way to approach the bluefish and the bone-jarring hits on a tight line gives you a different perspective compared to the run-offs experienced while chunking.

Gearing up for the Night Bite Blues

Leave the light tackle at home. Alligator bluefish are hard enough to bring in without having to worry about them tangling up other anglers in the close quarters you’ll be fishing on a headboat. A stout rod and reel are needed to put the boots to these water wolves. I use a 7-foot Lamiglas Tri-Flex rated to handle 4 to 10 ounces and 20- to 40-pound-test line. I match it with a Shimano Torium 20 reel. This outfit gives me the backbone and the guts to bring a big blue boatside. Any comparable setup will do, with a rod rated for 20- to 40-pound test and reel that can take the abuse of drag-searing runs. Monofilament line of 25-pound test, with a 40- to 50-pound-test leader, is fine to target bluefish. Don’t bring braided line! Braided line is bad news on the confines of a party boat when targeting bluefish. It can cut your fingers, cut other anglers’ lines, and even cut into the hull of the boat. Monofilament is the friendlier choice and most party boats require it.

In recent summers, a host of unusual visitors, such as small mako sharks, mahi and even wahoo have come into the chum slicks of night bluefishing. Therefore, when you’re on the bluefish grounds, always bring an assortment of tackle because you never know what you are going to find when the water temperatures hit the high 70’s.

In the past few years, mahi have been making a nightly showing on late August trips, and anglers fishing bucktails have caught 2- to 5-pound “chicken” dolphin. Some mahi up to 14 pounds have also been taken on the chunk. I hit a trip on the Norma K III on an August trip and a friend hooked into a 125-pound-class mako shark that was battled for a good two minutes before it broke free with some aerial antics. There’s also the possibility that summer speedsters such as false albacore, bonito and Spanish mackerel will come up and into the slick once it’s established. Always bring proper metals, bucktails, plastics and smaller hooks to target the occasional summer visitors so that you can add some tasty fillets to the cooler.

Night bluefishing isn’t necessarily about the challenge to fool the fish. It’s more about testing your mettle, tackle and technique to enjoy the pure sport of the battle. It’s a great way to introduce somebody new to fishing, and, at the very least, it’s a rip-roaring time to gather a group of your favorite friends, kick back, and enjoy a night on the water for some gut-busting good times!

Private boaters can check out these bluefish hangouts in the summertime months. (Taken from The New Jersey Boat Fisherman: 50 Back-Bay and Ocean Hot Spots for the Boating Angler, by Nick Honachefsky. Order by emailing the author at beachnut33@hotmail.com.) 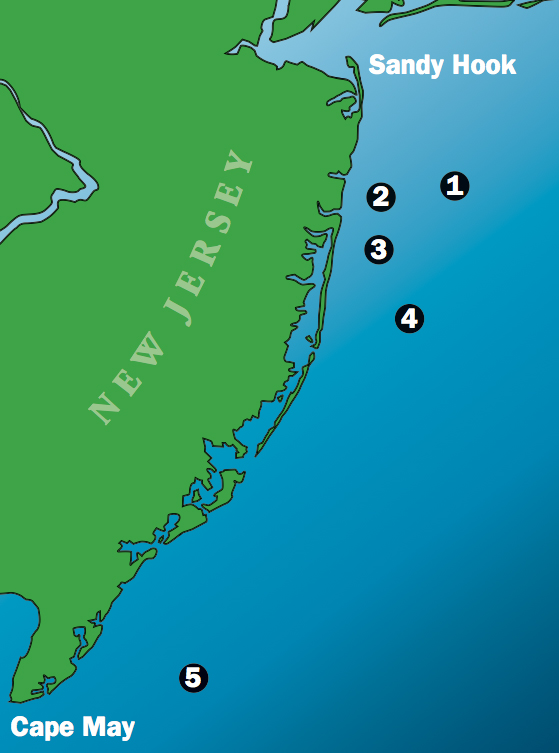 In a particularly turbulent week in late April during World War II, German subs sunk a host of vessels, and on April 28, 1942, the 412-foot Arundo became a casualty. A torpedo launched from German submarine U-136, ripped her open and sent her down, while she carried a cargo of two steam locomotives, 123 trucks and jeeps and various other cargo for the war effort. The Arundo rests in the upper western reaches of the Mud Hole, sitting in 120 to 130 feet of water.

At 5.5 miles northeast of the Manasquan Inlet, the Klondike is comprised of natural porous rock that was formed by the hardening of clay 10,000 years ago. The 46- to 80-foot depths are dotted by clusters of rockpiles and semi-hard mats of mussel beds, with water depths running 46 feet on the north side to 80 feet on the east side. The underwater ridge runs east to west with a slightly north pull and is about one mile long. And for a stroke of good fortune, in recent years a barge filled with rocks and boulders intended for the Sea Girt Reef missed its drop point and inadvertently spilled its load over the inshore half of the Klondike area.

The Mohawk rests 7.7 miles south of the Manasquan Inlet in 65 to 81 feet of water. On January 25, 1935, the 387-foot Mohawk, with a crew of 109, lost it automatic steering capabilities due to mechanical malfunction and rammed into the Norwegian freighter Talisman. Originally, when it went down, the masts stuck clear out of the water, but when the Navy found out and tracked a German U-boat that was using the Mohawk for a hiding spot, it was time to send the wreck down deep. The wreckage was dynamited with 16,200 pounds of explosives and then wire dragged extensively, and now rises up to a depth of only 15 feet off the ocean bottom.

Roughly 19 miles from Barnegat Inlet, depth at Tolten runs 49 to 85 feet deep. Named for the nearby shipwreck of the Tolten, the Tolten Lump provides an attractive hideout in the middle of flat bottom for many pelagic species. The sandy bottom bulge is a pretty defined squared knoll that lies along the 15-fathom line and runs just about north to south. It contains depths of generally 55 feet on the point to 85 feet off the sides, and covers a small piece of about a ½-mile square. It may be a small piece, but it has a lot of punch.

The amoeba-shaped Sea Isle Ridge’s center lies approximately 12.5 miles off the coast of Sea Isle in a northwest to southeast fashion, offering access and fruitful framework for nighttime chunking and jigging. Depth ranges from 45 to 80 feet within its ridges and off along the outside of its perimeter.