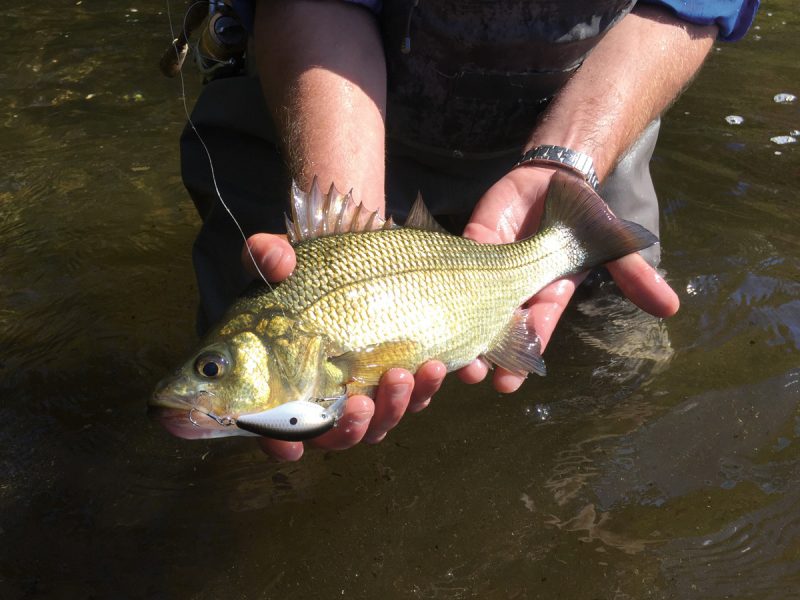 When retrieving a crankbait, there’s nothing more satisfying than having the pulsating action of your presentation abruptly halted by a fish that’s mistook the lure for its next meal.

There’s no doubt about it, the crankbait is one of the most popular fishing lures. It’s an easy lure to present and a very effective one for quickly searching the water for active fish. More importantly, a crankbait is a blast to fish with. Now, that enjoyment is being offered in a light-tackle size.

Many of the most popular fishing lure manufacturers offer a micro version among their line of crankbaits. By scaling down to one of these miniaturized versions, you open up vast opportunities to attract the attention of all species of fish in the lake. When conditions are right, these tiny hardbaits will put up big numbers in a short time.

Admittedly, many of the fish attracted by these micro crankbaits are panfish, but that’s not to say that larger fish won’t grab these little morsels as well. Plus, you will find that these crankbaits frequently attract the largest panfish in the pack. I’ve had my share of 12-inch crappies and perch attack these little wobblers.

This style of fishing is a game of numbers and variety. On a slow day, it can be the savior of your outing—a method that can keep you catching the whole day.

A “micro crankbait” is generally less than 2 inches in length and weighs between 1/16 and 1/8 ounce. The small size lends itself to the use of light tackle consisting of spinning reels spooled with 6-pound test.

Micros are available in shallow-running and sinking models. The shallow-runners are great for shoreline fishing because you can retrieve them in skinny water without constantly hitting the bottom. The shallow-running model is also excellent in rivers and streams due its ability to effectively work through the flows of faster water and hang tantalizingly in the current. Sinking versions have a slow fall rate, which allows the bait to slowly glide to the bottom, which is very effective when the fish are a bit lethargic. This also allows anglers to fish them at depths of greater than 6 feet since most shallow-running micro crankbaits dive only to 1 foot or so.

Due to these baits’ small size, fish tend to totally engulf them, so it’s helpful to crush the barbs on the hooks to allow for easy removals.

When using micro crankbaits, I use a small length of heavier line as a leader. It’s particularly important to do this in water inhabited by toothy pickerel or pike because they love to inhale these little baits and will make short work of lighter lines.

While fishing a micro crankbait can be as simple as casting it out and reeling it in, I’ve found that there are some subtle presentations that will improve success. Pause, twitch it, and take up any slack line since some strikes are going to be light. This is especially true if a large fish has taken the bait because it will tend to engulf it with barely a detectable tick.

I concentrate on water less than 10 feet deep. If I can locate submerged weeds, I work the bait just over the top of them. Fish that are hidden in the weeds will quickly show themselves.

Open flats of water with cruising fish are another great catching location. It may look like you are casting blindly into nondescript open water, but if the depth and bottom contour are right, you can catch fish as fast as you can cast.

Keep an eye out for fish dimpling the surface to help locate prime spots. I’ve located schools of white or yellow perch over such water, and it makes for quite an exhilarating experience to have your crankbait repeatedly smashed by roving wolfpacks of panfish.

If you have a fishfinder and can detect groups of fish suspended in the open water, back off a bit and toss your bait adjacent to the pack. It may be that you’ve located an active school of crappies, so hold on for some big-time action. These fish love micro crankbaits.

Another area where the micro crankbait shines is in a channel off the main lake. These load up with panfish, and a run-and-gun approach to covering water will help you find big schools of hungry fish quickly.

In rivers or streams, locate areas where the current has slowed (or forms a deep pool), then work the lure across and a bit downstream. Reel slowly and allow the current to provide the action to the wobbling bait. Smallmouth bass in particular seem to love this presentation, but just about any river-dwelling predator is likely to attack a micro crankbait fished this way.

Micro cranks are fun to fish and simple to use. They are an exciting way to catch big numbers of fish in a short amount of time. Give them a try!