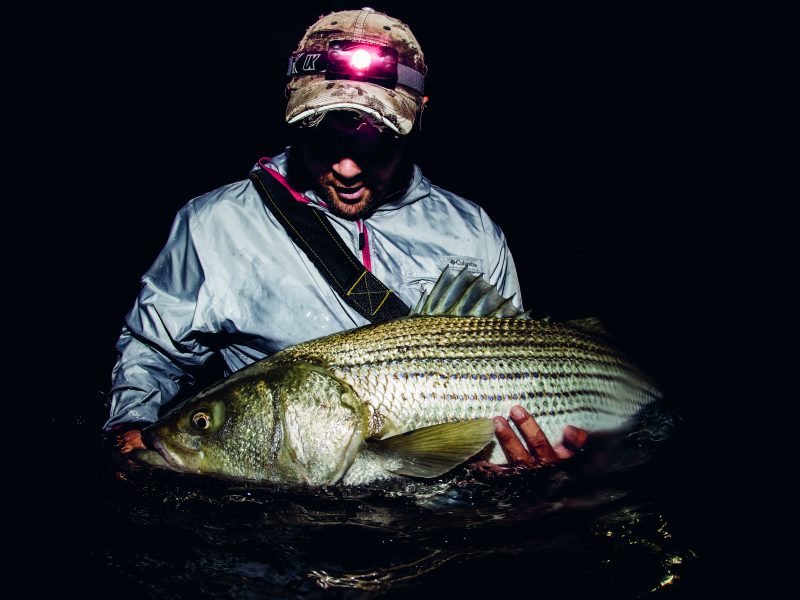 There are times when my daydreams of surfcasting are vivid enough that I can feel the thud of a bass hitting an eel. Other times, my arms twitch with the involuntary hook-set reflex—though I may be lying in bed watching TV, my mind is reliving an episode from the surf. Some of those memories resulted from hard work and putting in time; other great outings were the result of dumb luck, but the following story was a little of both. On that night, the three of us took a chance, everything came together, and many big fish were caught, photographed, and released.

➤ Submit your fish photos using the Instagram hashtag #OnTheWaterMagazine, or email them to feedback@onthewater.com.

The fishing in the middle of August 2017 was slower than usual in my home waters on the North Shore of Massachusetts. But, by fishing with eels at night, we were still able to find a few 20- to 30-pound fish. I’d been doing a lot of fishing with my buddy, photographer Mike Azevedo. I’d met “Vedo” while snowboarding in college, and we have been fishing together in the surf for a while now. When we first started, his experience with freshwater bass translated quickly to the surf.

Vedo had recently purchased a waterproof housing for one of his best cameras, so he now had the ability to shoot high-quality photos in the surf any way he wanted. I was eager to try to get him on some fish.

We were also joined by my friend Jay Freeman. Jay and I became friends by regularly fishing at the same beach. I’m not even quite sure when we exchanged numbers, but now we meet up every season, especially around the prime moon tides. Jay is an excellent surfcaster and a genuinely fishy dude, and we always seem to do well when we head out together. I’ve learned a lot of tricks from him and have seen him put on a big bass clinic when others were struggling. Jay had been with me earlier in the summer when I landed a 52-pounder.

Gearing Up for Large Stripers

We had decided on an early departure for this outing and arrived at the parking area about an hour before sunset. We took our time gearing up, chit-chatted and transferred our eels into carriers for the final leg of their journey. Vedo loaded up his camera gear and was carrying his large waterproof housing in a bag slung across his back.

It’s always awkward walking onto a crowded beach in full surfcasting attire on a nice night late in the summer. This was a particularly busy one thanks to the light breeze that kept the bugs down. We got the usual mixture of puzzled looks, stares and questions about what we were fishing for. Jay answered “Tuna!” which drew even more puzzled looks. We continued down the beach, quickly distancing ourselves from the sunset watching crowds.

About halfway into the walk, we reached an area we cleverly call “The Mid-Beach Spot.” We had a decision to make. Our destination farther down the beach was a well-known area among local surfcasters, and there had been a small lineup during some of the prime tides that season. If we headed straight there now we would have the ideal spots since we were the first fishermen. On the other hand, that area had not produced much over the past couple of trips. Plus, it would be dark by the time we got there, and Vedo and I had been hoping to get sunset shots with some bigger fish.

I suggested we give the mid-beach spot a shot for a little bit—at least until it got dark—despite the tide being less than ideal. We theorized that if the fish were coming in close to the beach later in the tide, they might be holding farther off, between the bars and troughs, during the lower half of the tide.

Each of us put an eel on his hook, Vedo checked his camera, and we all began our wade. Our destination was a subtle bar given away by gentle breaking waves. On the other side was a mellow trough, maybe 3-to-4 feet deep at our current point in the tide. As we approached the bar, it was only ankle deep. We spread ourselves out a bit, giving each other plenty of room. There was little to no surf and a light breeze at our back, typical for this beach during the summer and ideal for eeling.

I was already second-guessing the decision to try the Mid-Beach Spot instead of continuing our walk, but by the time my eel landed in the water and the slack was reeled up, my misgivings—and my bait—were annihilated. The bass hit my eel so hard that it set the hook itself. I still gave it a good whack, mostly out of reflex, but the fish was already off and running. After a hard and short first run, the fish paused for a few big headshakes before unceremoniously snapping my line. I let loose with a string of words that aren’t fit to print, checked my line, and began looking for another hook to tie on.

After seeing that I had lost my fish and blown the sunset photo opportunity, Vedo sent his eel out and hooked up to a good fish immediately. A few seconds later, Jay followed suit. All of this was happening as I focused on trying to get an eel hook out of the Ziploc in the bottom of my plug bag. There are few surfcasting experiences more torturous than trying to re-tie while your buddies are hooked up and there is a school of big fish in front of you. I took a deep breath and tried to focus on the task at hand as Vedo and Jay unhooked twin 25-pounders. Jay was more interested in catching another fish than stopping for a photo, so he sent his fish back into the water as soon as it was ready. Vedo did the same.

I finally managed to cinch down a knot, clip the tag end and pull an eel out of the pouch on my belt. “There’s a bunch of fish out there,” Vedo said. After what seemed like an eternity, I sent another eel into the trough, began my retrieve, waiting for that thump. The eel made it halfway through the trough, then three-quarters through, and my heart began to sink. Was that it? Were those all the fish? I reeled up and sent another cast out, this time farther to my right. I began my retrieve a little faster this time, partially out of desperation. A few turns of the handle later, I received a solid hit. I dropped the tip this time, just for a second, and felt the line come tight quickly. I set the hook hard and had my shot at redemption.

The sun had just started dipping below the horizon as all this was unfolding. In the back of my mind, I knew that this was exactly the scenario Vedo and I had been hoping to find. Big fish, sunset, waterproof housing, and a pro-quality camera. I really didn’t want to blow this photo-op again, and after a few tense moments, I had the fish close enough to grab the leader and lip it.

Vedo had already started moving toward me, pulling his camera from its shoulder strap bag. The housing is about twice the size of the actual camera and has a second housing on the top for the flash. On the bottom is a pistol-like grip with a large silver button that fires off photos. By the time I got the fish under control, Vedo was already right there and ready to start taking photos. He positioned himself where he wanted to shoot and took a couple of me holding the fish out above the water in a few different positions. He adjusted the camera, tried putting some of the lens in and out of the water, and tried different angles. I moved the fish into the water and held it by the tail to let her catch her breath before the release. Vedo fully submerged his camera and fired off a few more before the fish swam away. We were both pumped, but the thing about the waterproof housing is that you can’t check any pictures until you’ve taken the camera out. 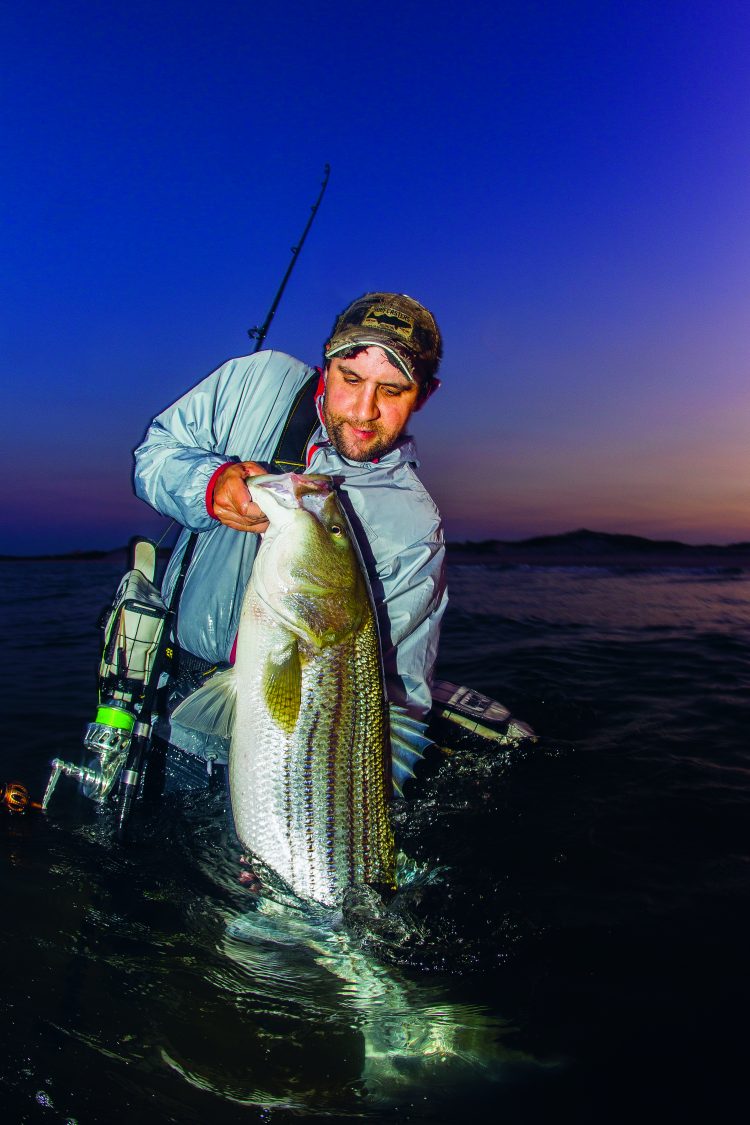 We all put another eel on and got back out there, catching a couple more fish in the mid-20-pound range before total darkness took over and we got pushed off the bar we were on.

After a break we finished our walk down the beach. The tide was still a bit low, but the fish were there anyway. They were a little bigger than the ones we had encountered at sunset – most were in the high 20- to low 30-pound range, with a few into the mid-30s. After catching a couple nice fish himself, Vedo put his fishing gear by the dunes and returned with just his camera equipment. Jay and I caught a handful of 30-pound fish that proved to be fine subjects for Vedo and his new waterproof housing. He even got into the surf and took shots of fish being slid up into the wash of the beach, and a bunch of cool underwater shots, along with some that we had no idea whether they would work or not.

A Night to Remember

As we approached the final hour of the incoming, the tide started to slow down, and so did the bite. We had nearly run out of eels, the insides of our thumbs had been chewed raw, and we were exhausted. We had been rewarded with what we came for, so the walk back to the trucks was not a hard one that night. In fact, I think we practically floated.

After fishing, Vedo returned to my place to pick up his truck and rinse his gear. Before heading home, he pulled the camera from the waterproof housing so we could see how some of the shots came out. We had been gunning for a cover shot this season and I thought one could be a contender. A couple of months later, one of those shots ran on the cover of the On The Water’s New England edition. We were fortunate that everything came together the way it did, as nights like that one are increasingly difficult to come by. It will always be one to remember—big fish, good friends, and awesome photos to fondly look back on.