Pictured above: Hang Time: A monster Manasquan blue takes to the air.

The Manasquan River, located in the heart of the Central New Jersey coast, is a 26½-mile-long system originating in Freehold Township in northern Monmouth County. From there, it meanders seaward until it enters the Atlantic Ocean through Manasquan Inlet. Each spring, around the second week of April, bluefish return from their wintering grounds. The fish seek out the warmer waters of the river system and devour anything that crosses their paths.

In the last three seasons, the bluefish arriving in the springtime have been of gargantuan size. Most years bring an influx of 6- to 12-pound racers, but even the oldest salts still fishing the Manasquan are baffled by the 15- to 24-pound fish are being caught today. These are true gorillas, giant gators, the fish that summer party boat crews dream about, and they have been showing up right in front of their boat slips!

“It’s amazing that you can just pull out of your slip and catch these giant blues”, said one of my clients, Bill Johnston. For charter captains like me, the arrival of big, backwater blues has been a great diversion when the stripers don’t show up early. Rather than just sit at the dock, I started doing back-bay charters with light tackle spin and fly gear.

On most days, within 5 minutes of pulling out of my slip, clients are tight to their first monster blue. From there, it’s game on since just about every cast draws a strike or a blue following along, slashing at the artificial.

Since most of the action takes place in 2 to 6 feet of water, it’s no easy task to land these big bluefish. Because they can’t swim down, they swim out—it’s like hooking a trophy steelhead in a shallow river.

I pole my clients into the placid, shallow waters in the back of the river as if we were on the flats in the Keys. Though there may be no life in sight, casting a topwater popper toward the bank incites a riot as gator blues rush the lure. The silence is quickly broken by the thrashing of the bluefish and the exclamations of the angler.

The brackish section of the Manasquan River is small, peaceful, and quiet on most weekdays, and you can cover and fish the entire tidal section of the estuary by boat in a few hours. The center of the action takes place from the mouth of the inlet to the area west of the Route 70 Bridge, known as the Narrows, a distance of approximately 3 miles.

The first bluefish are typically caught in the inlet since anglers start fishing there at the beginning of April. Word quickly spreads that the fish have arrived, and the inlet rocks and rails fill up with anglers. Manasquan Inlet is one of the most easily accessible inlets in NJ, so it’s easy to park your car, walk 10 feet, and catch fish.

Spring bluefish are commonly called racers because their long, slender bodies seem disproportionate to their large heads. They also earn that nickname from their tendency to race around the back bays and shorelines, devouring anything in their path.

Once they reach the inlet, bluefish quickly spread out in the river system, moving west and away from the colder ocean waters. For anglers on foot, a favorite spot is wading off Dog Beach, which has great access and is located just inside the inlet on the north side of the estuary. It is part of Fisherman’s Cove, a 55-acre beach and partially wooded area that is a section of the Monmouth County Park System. Boaters also set up in the channel, drifting with the tide to the New Jersey Transit railroad bridge. (The section of water west of the railroad bridge up to the Route 35 drawbridge is only about a football field long and doesn’t hold bluefish.)

Once you move west of the Route 35 bridge, the river opens to a deeper channel on the south side and extensive mud flats on the north side. It is lined with beautiful homes and the Manasquan River Country Club, meaning picturesque views from a boat. Bluefish spread all throughout these waters and can be caught both in the channel and on the flats.

Treasure Island is rich with history and is frequented by kayakers and boaters as a place to relax and meander along its wooded trails. In May 1888, Robert Louis Stevenson spent a month in Brielle and visited the island, then called Osborn Island. He re-christened it “Treasure Island” and carved his initials into a bulkhead. The name has stuck to this day, despite the island’s official name of Nienstedt Island, honoring the family who donated it to the Borough of Brielle.

Around Treasure Island is where the real magic of the spring bluefish run takes place. Here, the water temperature changes abruptly during the tide changes. During outgoing tides, particularly in the late afternoons, the water warms 6 to 8 degrees on the mud flats surrounding the island. Pull up next to the island in less than 2 feet of water and let the tide drift you back toward the east for a half mile, which will keep you in depths of 2 to 3 feet, right where the bluefish are feeding. 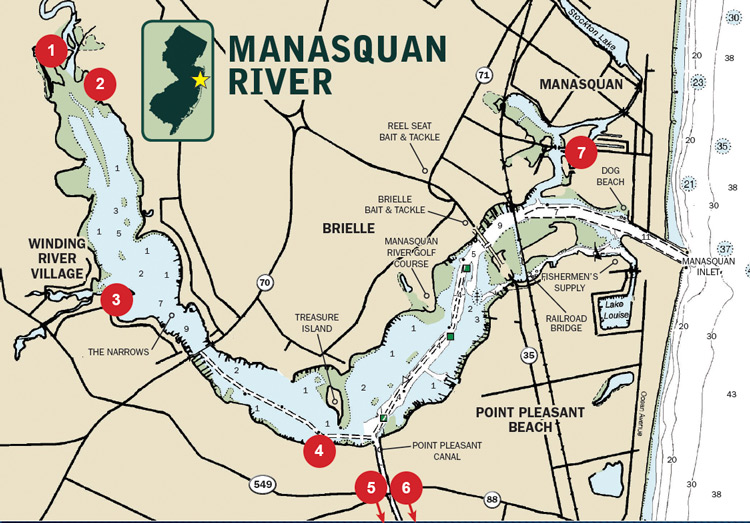 On some oil-slick-calm days, you will see schools of blues finning as their dorsals and tails break the surface. Strikes on poppers are vicious, visual, and explosive. Every angler on the boat can be hooked up at the same time, making for some real mayhem on the deck. The weather doesn’t seem to matter much—the blues hit every single day once they set up on this flat. We have been out there in a howling nor’easter, casting through the pouring rain, and still doubling and tripling up on every drift.

Boaters and kayakers can also move to the back of Treasure Island via a narrow cut on the north side. This cut is deep, averaging around 10 feet, so even though it looks narrow and sketchy, there is more than enough draft for safe passage. Here, a bar butts up to Treasure Island and creates a rip when the tide is moving, and bluefish always hang along its edges. The same type of topwater action can take place on the back side of the island in 2 to 3 feet of water.

Drifting the back of the island is ideal when the wind is blowing hard out of the east, as the island will shelter you. The incoming tide is an ideal time to drift this location.

The next ¾-mile section of river behind Treasure Island is mainly accessible by boat or kayak. The river runs back to the Route 70 September 11th Memorial Bridge. The boat channel remains on the south side of the river while the mud flats are on the north side, and bluefish can be caught all along this stretch. Past the Route 70 bridge, the channel narrows and is marked only by sticks. The water gets shallow, but it is still an ideal place for kayakers and fishermen in tin boats to catch fish.

Bluefish will attack just about any artificial you throw at them, but the 6-inch floating Daiwa SP minnow in “sand eel” or “laser green shiner” out-fishes any other lure I throw. I have this lure on all my St Croix 7-foot Legend Trek light/medium spinning rods, and rarely change it. It’s a long-casting plug that can be retrieved quickly to produce an erratic side-to-side swimming action. Because of its length and the fact that bluefish bite from the tail, my leader never gets touched. To get a bluefish in the boat, I reach down with a wire coat hanger and grab the top treble that is hanging out of the blue’s mouth and just lift the fish into the boat. There’s no need for wire or a heavy leader when using this plug.

I also have a blast fly-fishing for blues using the bait-and-switch method. I cast out a hookless popper on spinning tackle and work it across the surface. As the blues begin crashing behind it, I draw them close enough to the boat that my clients can reach them with flies. When the fish are just about in fly-cast range, I pull the popper out of the water and the fishermen cast their flies to that spot—usually, an instant hook-up results.

Bite-offs are inevitable when fly-fishing for blues, since a large racer can easily inhale a fly. To prevent this, use a wire tippet. I use tie-able wire products such as 30- to 50-pound-test Tyger wire.

Capt Jim Freda is owner of Shore Catch Sportfishing, Manasquan, NJ, and can be contacted at 732-762-0870 or jimfreda@optonline.net.