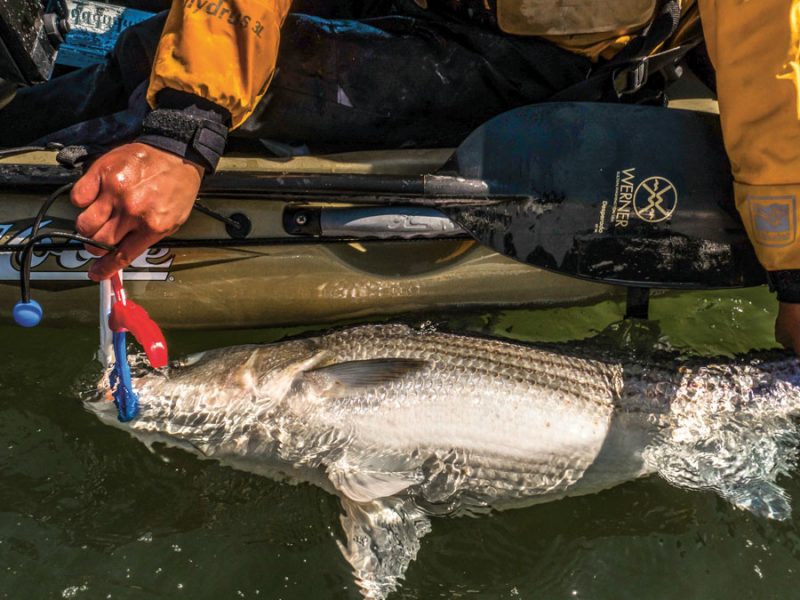 Part of the fun of kayak fishing is being immersed in the element—we sit low in the water and have a very close connection with the fish we catch. Kayaks are low impact on the environment, we don’t generate a much noise, and we don’t spook all the fish around us. And, because kayak fishermen sit so low in the water, it is easier to get fish in the boat or even just release them boat-side, making landings and releases easier on the fish.

With the current state of striper stock, it’s important to release fish in a way that maximizes their chances of survival. Recent reports show that more than half the striper mortality caused by recreational fishermen comes from released fish. The mortality of caught-and-released stripers is estimated at 9 percent—but imagine the significant positive impact we could have on the future of striper fishing if we cut that number in half.

Studies have consistently shown that fish mortality comes from poor handling of fish when caught and damage from hooks. As kayakers, I think we have an advantage over both boaters and shore-based fishermen because we don’t have to drag fish onto the beach or rocks and we don’t have to swing it over a gunnel onto a dry deck.

The fastest way to land and release a striper is to do it right at the side of the boat. You barely need to lift the fish out of the water—once the hook is out, off it goes. If you want to take a picture, it’s best to keep the fish in the water with a lip gripper while your camera person gets ready. A fish lifted out of the water just before the photo is taken always looks better. Most kayakers I know do a great job of keeping fish that will be released fresh and ready to go, and I would bet that the majority of striper mortality after release from kayaks is due to hook injuries.

There are some simple things that we can do to make lure or hook removal fast and easy in order to have a low impact on the bass. Our fishing techniques, hook style, and lure choice impact the number of fish we catch and how strong they swim away afterward. I would argue that many low-impact tactics are the most effective for catching more fish.

I’ve always tried to use treble hooks as little as possible in the kayak, especially for stripers. Landing a large fish in a kayak is a bit more dangerous when that fish has a mouthful of trebles! I’ve done it as much for self-preservation as I have for fish safety—I’ve been hooked a couple times on boats and definitely don’t want to find myself with a hook in my hand in the kayak.

Fortunately, it has been easy to minimize treble hook use in the kayak because there are many very effective techniques that don’t involve trebles. But, when you do use lures with trebles, such as topwaters, SP Minnows, or Sebile Magic Swimmers, it’s not necessary to have 2 trebles swinging around. Many kayakers rigged these types of lures “canal-style” long before canal-style was a term used to describe rigging. This style involves removing the rear hook and putting a treble on the front hook hanger with a swivel. The swivel keeps the bass from using the leverage of the lure to pull the hook, and since most bass hit a lure in the middle, it doesn’t reduce the number of fish hooked. This style of rigging is much safer when the fish is at the boat because you don’t have an extra treble spinning around to catch your hand.

Kayakers often put a rod in a holder and slow-troll live baits. With circle hooks, no hookset is necessary. When hit, keep paddling until the hook sets itself. It is best to fish with a tight enough drag to ensure a solid hookup when the fish turns and runs the opposite direction.

Other tactics require only single hooks and catch plenty of fish.

Tube-and-worm trolling is one of the most popular techniques because a kayaker typically moves at the perfect trolling speed. Most tube-and-worm fish are hooked in the lips, and can be easily unhooked, often without even taking the fish out of the water. But, hook choice on the tube is important. A hook with a large barb will tear up the sandworm and do more damage to the fish. A hook with a smaller barb holds the bait better and is easier to remove from a striper.

Regular readers know that I’m a big fan of plastics, not just because they are extremely effective but also because they are a single-hook method for catching bass. I include bucktails in this category, along with swim shad baits like the Hogy Pro Tail or Storm Wildeye. These baits almost always hook fish in the lips, and they’re always easy to remove. Crushing the barbs, especially when catching smaller fish, allows you to easily slip the jigs out and get the fish right back in the water.

Baits in this class also usually have the highest hit-to-hookup ratio because fish hang on to them longer and are easier to hook than on most large plugs with multiple trebles.

By making some slight adjustments to tackle and techniques, we can reduce the mortality of released fish and don’t have to do it at the expense of successful fishing trips. If you haven’t tried these techniques, it might be time to add them to your toolkit. Keep fishing hard, but have a lower impact.