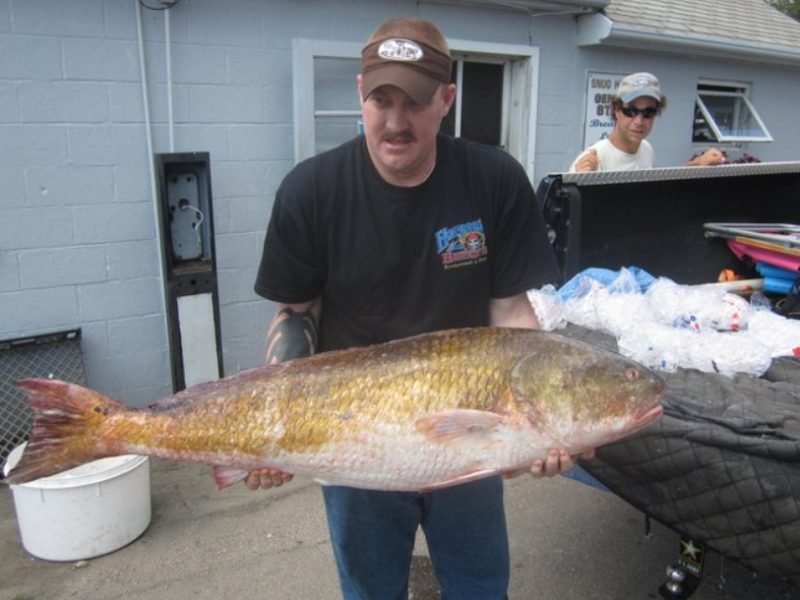 The past few years have seen quite a few surprise visitors to the waters of the Northeast. While opinions differ on whether these catches were anomalies or signs of a changing climate and ocean, I wouldn’t mind if some of these lost southern species became more frequent visitors to our local waters.

New Jersey has seen a sizeable increase in the number of red drum caught the past two falls, with some anglers catching multiple fish in an outing while targeting stripers from the beach. While most of the redfish turning up in New Jersey were what southern anglers would consider “puppy drum,” a few much larger specimens pushed even farther north. In 2011, a 48-pounder ate a bunker chunk in Rhode Island, and in 2012 a 35-pounder smacked a diamond jig fished off Chatham, MA.

Fishermen have been spotting these big brown fish circling buoys off New Jersey for the past few years, with one occasionally flanking a school of bunker. Recently, anglers have tangled with them a bit farther north with a pier fishermen on Long Island catching one in 2011 and one being caught on Cape Cod in 2013.

I’ve heard rumors that at the height of summer, boats leaving from Cape May can reach deepwater wrecks that reliably hold these hard-fighting fish. Whether this is a fish story or a well-kept secret, I’m not sure, but I do know that one fishermen caught an amberjack while jigging for bluefish off Long Island in the fall of 2013.

Seeing juvenile jack crevalle mixed in with snapper blues at the end of summer is nothing new, but I’d never heard of one larger than about 6 inches until OTW’s own Andy Nabreski tangled with a 2-pounder off a south-facing Cape Cod beach in 2012. In 2013, there were more bigger jacks reported on Cape Cod.

Though I haven’t seen any proof of a tarpon caught in the Northeast in recent years, New Jersey does have a (retired) tarpon category among the saltwater state records listing a 53-pounder taken off Sea Bright in 1983.

No catch in the past decade was more surprising than the sailfish that made a wrong left turn somewhere along the way and ended up in the Cape Cod Canal. A sailfish would be a relatively unusual catch even in the Northeast Canyons, but catching one from shore in the canal is something I would have never believed was possible.