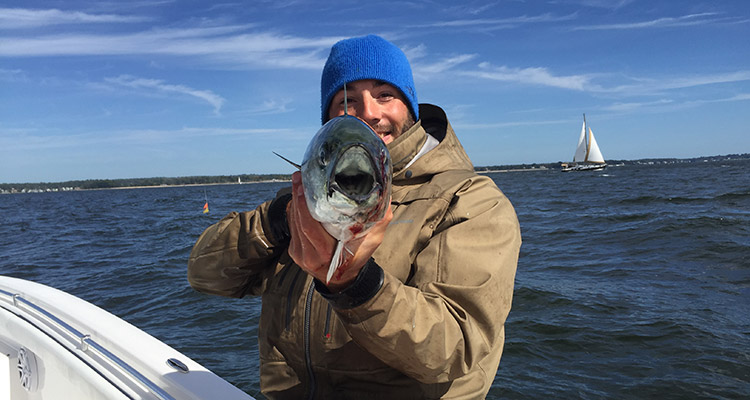 We went out for Albies on Sunday between Norwalk, CT and Lloyds Neck Pointt on the North Shore of Long Island. Long Island Sound was extremely rough with 4-foot breakers following a week of stong winds and 100 miles of unobstructed water for the slop to build up.

Silver lining was the spotty conditions put the albies on the feed. One engulfed my lure and was hooked in the gills. The fish was bleeding out, so I kept it and followed instructions from the recent article on OnTheWater.com about eating albies. I immediately bled the fish and  tossed it into a saltwater ice slurry. Trimmed and marinated in teriyaki, the albie was very tasty. The “sporty” conditions also made for some awesome pictures before releasing the other fish.

Also noteworthy is that peanut bunker are everywhere! And the size of some of the bunker in the albie’s stomach is making me rethink the smaller lures I was throwing. I will definitely start trying bigger plugs and topwaters the next time I set out for false albacore.