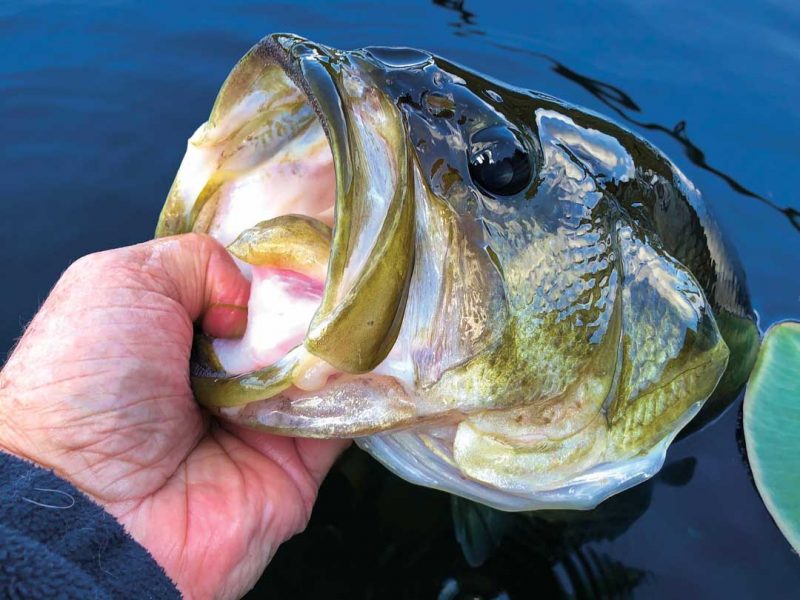 It is quite possible—even likely—that the next New York state record bass will come from the waters of Long Island. No, not the highly coveted striped bass record, but the record for largemouth bass.

Surprised? Don’t be. Long Island is home to a vibrant freshwater bass fishery, and the fish grow to sizeable proportions.

Long Island is fortuitously positioned between the Long Island Sound and the Atlantic Ocean. These aquatic environments collectively support one of the finest saltwater sport fisheries in the world, but the Island’s fishing potential goes well beyond its saltwater boundaries.

If you examine a map of Long Island, you will notice that quite a number of freshwater lakes and ponds dot the landscape. Most are relatively small bodies of water that range in size from less than an acre to more than 240 acres. Many contain bass; Others do not. Some have big bass reputations while others harbor numerous small bass populations. A surprising number of Long Island waters are “sleepers,” known to have just a few, waiting for an angler’s lure to wake up a lunker largemouth and disprove the often-believed misconception that “This old pond is fished out.” And, there are those hidden, out-of-the-way gems that beckon the adventurous bass angler to come forth and enjoy the bounty, and perhaps even see a piece of Long Island the way it used to be.

Bass in the Island’s lakes and ponds grow large and grow quickly, thanks to the unique conditions present on the island. One of the most significant factors affecting the growth rates of Long Island bass is the influence of coastal water on climatic conditions. On an island, the surrounding saltwater creates a moderate and consistent climate for the landmass it influences. In a nutshell, the mild temperatures allow the Island’s freshwater bass to extend their feeding cycles deeper into the year than would otherwise be possible in the Northeast. And, the more a bass eats, the faster and bigger it grows.

Trophy northern largemouth catches—bass weighing five pounds or more—are a reasonably common occurrence from Long Island waters. Despite increased angling pressure, well-embraced catch-and-release practices and enhanced conservation management techniques have kept the fishery healthy. Although not on par with the peak years of the 1970s and 1980s, the current fishery is quite viable and offers many bass-fishing opportunities. Measures of that viability are represented with healthy year-class fish and substantial numbers of trophy bass from many of the Island’s ponds and lakes.

Throughout my time freshwater fishing on Long Island, I have been party to or an observer of many significant catches that illustrate the quality of its bass fishery. The following is a sampling of the Island’s freshwater bass history and potential:

Examples of Long Island’s bass-fishing potential exist in the island’s freshwater folklore. The venerable statesman, Daniel Webster, wasn’t the only one entangled in a tale of a monstrous freshwater fish taken from the waters of Long Island. While that story is about a huge brook trout caught from the Carmans River, another extremely popular tale describes the capture of a 14-pound largemouth from the Peconic River. As the story goes, an elderly Riverhead woman fishing from shore with live bait hooked into an exceptionally large fish. After what was described as a gargantuan struggle, she landed the bass, weighed it, showed it off to a few folks. and then dragged it home for the dinner table. Many reject the event as being improbable and far-fetched—there are always going to be skeptics—but the thought of such a prize is more than enough to get any bass angler’s adrenaline flowing.

Those new to freshwater bass fishing on Long Island usually ask the question, “How do I fish for Long Island bass?” The short answer is: No differently than you do anywhere else. Yet, considering the size of Long Island’s bass waters, you may have to adjust your approach to these ponds. Small aluminum bass boats work well for a number of the Island’s largest waters, but jon boats, canoes, and kayaks are more practical and easier to launch and maneuver.

Easy launching is important since access to many of the more productive waters is limited and informal, and the ponds are rather small. Add a small electric motor and you have a fishing combination that can’t be beat. On smaller ponds. the game is sometimes, “Round and ‘round you go; where you stop no one knows…” That is, you may be lapping the pond’s shoreline until you find active bass.

Shoreline access is sometimes the only method of entry, so wading is yet another angling option. Whether you choose to fish from a boat or wade, always remember to use a personal floatation device.

Bass habits and habitats, as well as seasonal considerations, govern the techniques of my fishing and the type of equipment I use.

Subtle shoreline structure is the place to focus your attention during the spring. As the weather warms into July, the bass move toward deeper or cooler summer holding areas. They also enter weed- and lily-pad-infested areas. This is a good time to start fishing a variety of soft plastics and frog baits.

During the hottest days of summer, reaction baits like buzzbaits and chatterbaits become very productive. For these sweltering days, fish the shallow shoreline structure during the dawn and dusk hours. Concentrate on finding fish in deeper water come late morning and afternoon hours. If you are able to locate the deep-water bass haunts, attempt to track movements to and from these locations. Gaining knowledge of these migration patterns will enable you to catch bass throughout the entire range of their daily movements.

The late fall is a period of fishing transition, and it can be a time of feast or famine for Long Island bass anglers. Bass adjust their behavior to the changing weather patterns and water temperatures. At times, they may be found feeding voraciously in anticipation of the coming colder weather; other times, a strong case of lockjaw will set in. While these habits are also evident in the spring and summer seasons, it appears that they are often magnified in the fall, especially with rapidly declining water temperatures. Deep lakes that experience fall turnover can be the most challenging.

Brendan Cucinello is one of Long Island’s brightest bass-fishing stars, both as a tournament and big bass angler. His name is synonymous with sizable largemouth and smallmouth bass, and he thoroughly enjoys fishing throughout the entirety of the fall months. Brendan offers the following advice for fishing late-season bass: “When those fall flurries of bass caught in typical locations pass by and the bites seem fewer and farther between, don’t give up. One of the best-kept secrets of Long Island lunker hunters is timing. While most sportsmen shift their attention towards hunting deer and turkey, die-hard bass fishermen bundle up and get out on the water. On Long Island, this typically occurs in November when the air and water temps begin to drop below 60 degrees. Shallow cover with a drop-off nearby is one of your best options. I stick with a compact jig and craw trailer in black, but I always keep a micro jig combo tied on as the water temps cool. If you are willing to put in the time, the rewards can be great.”

The reference to “deep” water is totally relative to the nature of the lake or pond you are fishing. Many of the Island’s waters are predominantly shallow. On these lakes, any water depth below five feet may be considered deep. Lakes such as Ronkonkoma, and other local kettle lakes offer greater depth variations and, at times, water deeper than 60 feet. Despite the shallow-water nature of many Long Island lakes and ponds, structure-fishing techniques have significant implications. Structure not only relates to bottom contour changes but also whatever happens to be on or around those contour changes. Structure can be subtle or easy to identify like a fallen tree sitting at the edge of the shoreline. It can also be a stump or break between two different depths of water, a weed bed on a shoal, lily pads positioned at the point of a cove, or brush at the edge of shallow water where it breaks to deeper water. Learning how to fish the structure in your favorite bodies of water can only help increase your odds for success.

Whatever tackle you use on other bass waters will work well on Long Island, but here’s a brief rundown of some basic options.

Most of Long Island bass fishing can be adequately handled with either light to medium-heavy spinning or conventional baitcasting tackle. Many smaller ponds are also ideal places to wield the long rod with bass bugs and poppers. Casting outfits are efficient for pitching and flipping, while spinning and lighter lines work well for finesse-fishing some of the more subtle baits.

When using spinning tackle, select rods measuring between 6 and 7 feet in length with a blank rating of either medium or medium/heavy. This type of action can effectively handle a wide range of bass baits including topwater plugs, spinnerbaits, crankbaits, jig variations, and plastic/soft baits. My preference is a rod with a two-handed grip. That additional leverage is helpful in fighting fish and can be beneficial when casting light lures.

Matching a reel to this rod is an easy proposition since there are many excellent models on the market today. The reel should accommodate 8- to 12-pound-test diameter lines. With some of the newer hybrid and braided lines, you can upscale the pound-test while maintaining the same diameter of the smaller lines. Flipping outfits and associated techniques also work nicely in and around shoreline structure. Big bass in tough places often require sturdy gear, so medium to medium-heavy outfits with braided line can be the ticket to landing trophy bass.

Should you choose to fish for Long Island bass, please bear in mind that the attraction of this gamefish is its unique existence. Unlike trout, bass populations on Long Island are not sustained by stocking efforts. These bass are wild, existing and perpetuating by instinct alone. It is this quality that earns the “bass without stripes” the respect of Long Island’s fishing minority. Please practice catch and release and respect the fishery.

The general black bass fishing season on LI extends from the first Saturday in June through November 30. Bass cannot be targeted during their expected spawning period, which is from May 1 up to and including the Friday before the first Saturday in June. A number of lakes and ponds have special winter catch-and-release regulations. For specific details on those seasons and affected bodies of water, check the NYS DEC website.