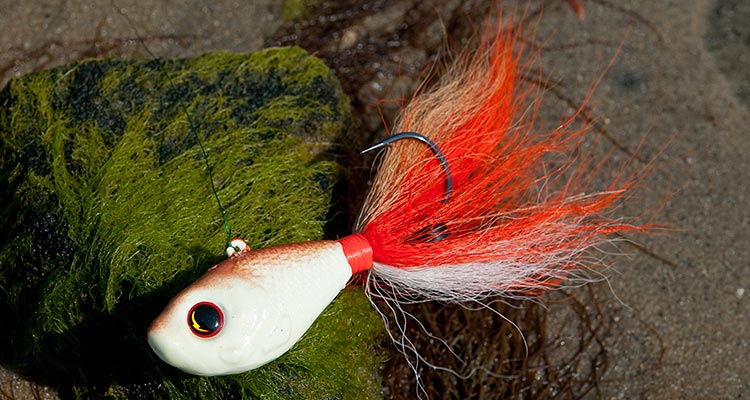 Every fisherman has a catch that redefines his view of a particular species. A friend of mine, who wouldn’t give sunfish the time of day from March to December when the lakes are open and the weather is nice, went absolutely bonkers for bluegills the first time he caught one through the ice. I had a similar revelation with summer flounder. While I’d always enjoyed drifting bait rigs for them, I became a certified fluke fanatic the first time one of these fanged flatfish latched onto a bucktail jig I was bouncing on the bottom.

Every season more fishermen become interested in jigging for fluke, and naturally the first question they ask is, “What kind of jigs do I need?” For the past five years, the resounding answer has been the New-Jersey-based S&S Bucktails Rattletail.

Stanley Gola, Sr., first made the bucktails for himself and his son, owner of S&S Bucktails, Stanley Gola, Jr. The jigs proved to be deadly on Garden State fluke, and before long, S&S Bucktails were becoming the standard for jigging flatfish.

Making the bucktails rattle was Stanley Sr.’s doing. He believed the clicking of the rattle would call in the fish and help set S&S Bucktails apart from the other jigs.

Another aspect of the S&S Bucktails that helped win over the Northeast bottom-fishing fleet is the outstanding color selection. Rattletails are available in an unreal 27 colors. Included are all the fluke standards such as white, chartreuse, pink and glow, but Gola Jr. also offers Northeast-specific baitfish colors such as mullet, bunker, spearing, baby fluke, and, one of his most popular colors, baby sea robin.

In addition to being pretty, those paint jobs are tough, and won’t chip, crack, or peel, so don’t be afraid to bounce them through the rough bottom where the doormats hunt.

Rattletails range in size from ¾ to 8 ounces, the lighter sizes perfect for back-bay fluke assaults and the larger models meant for deep-water doormat hunts.

Stanley Jr. prefers to fish his Rattletails with strip baits and whole spearing. He adds a Berkley Gulp Teaser above the jig.

The Rattletail has been responsible for a number of tournament-winning fluke, including two port winners in the 2015 Jersey Coast Anglers Association Fluke Tournament, and the winner of the 2015 Duke of Fluke Tournament.

S&S Bucktails currently offers 25 different lures including the Rattletail. When fluke season closes throughout the Northeast in September, Stanley Jr. said the bulk of his business switches over to striper-specific jigs such as the Slimfish sand-eel imitating jig and the Rockhopper Bucktail. The Rockhopper has a bullet-style head and is tied with ample amounts of hair in order to help the jig swim over the rocks and give the appearance of a big baitfish.

Another variant of the Rockhopper Bucktail is the Rockhopper with Hackles. The hackle feathers, which extend beyond the bucktail hairs, eliminate the need for a soft-plastic or pork-rind trailer, while still providing a very enticing action when retrieved.

S&S Bucktails are available in tackle shops from Maryland to Rhode Island, and as more anglers discover the effectiveness of these fluke- and striper-killers, expect to see S&S Bucktails coming to a tackle shop near you.