I first met Mike Mullen a few years back at a Connecticut Surfcasters Association Meeting while giving a talk about fishing needlefish, and, what I considered then to be “big” needlefish. After the talk, Mike waved me over to his table, and redefined my idea of a big needlefish. His “Biggie” jointed needlefish measures a whopping 15 inches, and he’s used it to catch stripers up to 51 inches long.

“Before I made lures, back around 2004 I started tying flies.  I remember getting a real kick out of catching fish on the flies I had made.  That excitement made me want to move on into making plugs.”

Mike’s motivation for making lures is a familiar one. Tired of losing store-bought lures, he began making his own. “Back when we were fishing with mono, I used to lose a lot of plugs.  It wasn’t unusual for me to lose one or two every time I went out. I started making lures from kits.  Then I took a lure making class with ‘Q’ Kresser, at Rivers End where I got to try out a lathe.  After that, I went out a got a lathe and started turning on my own.”

Mike found fast success with his own lures, catching some quality bass. Two years ago, he started High Hook Lures, LLC.  “The name comes from my winning the Connecticut Surfcasters Association’s High Hook Award in the Striped Bass Lure Division six times since 2006.”

High Hook Lures offers five needlefish styles from the Biggie to the “Mini”—which at 7 inches long is hardly miniature.

“The Biggie is the King of Needlefish, a two-piece, fifteen-inch, three-hook monster that actually casts quite well.”

A 15-inch needlefish may seem like a challenge to carry, but Mike says he carries it on top of the three tubes in his surf bag. This way, the hooks fit into the bag and keep from snagging his jacket. The Lil’ Brother is an 11-inch easier-to-carry version of Biggie.

Mike recommends retrieving his jointed needles with a moderate retrieve.  “Not too fast, not too slow.  I especially like working in choppy water or drifting across a rip—the lures make their own action in rougher water. If it’s calm, I may add an occasional twitch and I also really like to do the stop and go.  There’s nothing like getting hammered when you go to pick up again.”

“I also make a basic eight-inch needlefish lure as a floater and sinker.  It’s a unique take on the traditional lure that’s very effective in the right situations,” Mike said.

The Mini, is a narrow 7-inch needlefish, that’s has been successful for Mike in the early season and all season long.

Mike’s strategies when fishing his plugs is to first go big, and then switch over to a more versatile lure. “When I’m fishing big, I always start with Biggie just to see if there’s any big fish in the area.  After twenty minutes, I’ll move on to Dinner Catcher which gives me more range.  Dinner Catcher gets the best distance of all my plugs and retrieves in a real sweet spot in the water column, just about a foot below the surface.”

High Hook Lures can be purchased at River’s End in Old Saybrook, Connecticut, Larry’s Tackle Shop on Martha’s Vineyard, and the Cuttyhunk Island Market.  You can also find Mike at several surf fishing shows and flea markets over the winter, or purchase his lures at highhooklures.com 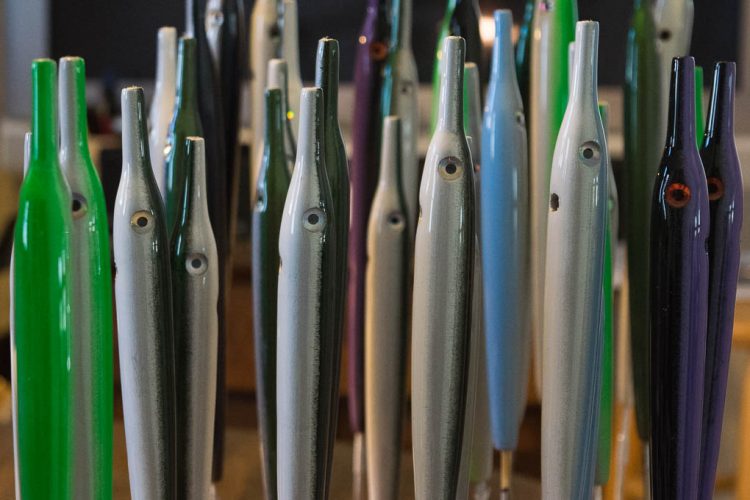