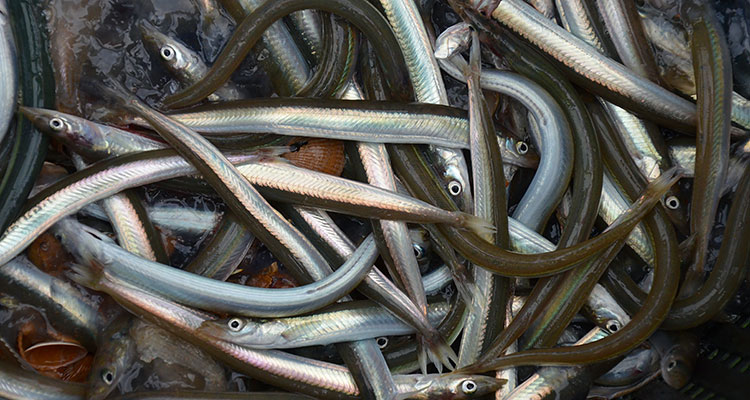 Look to structure to find the bait and the migrating fish feeding on them.

By Thanksgiving, the baitfish that sustained the first half of the fall run, the peanut bunker, mullet, and anchovies, are getting scarce. Surf-fishermen pin their hopes on sand eels and herring moving within range of the beaches to keep the fishing hot deep into the cold-weather months.

If the sand eels are going to show, they will be dug in at offshore sandbars by the first week of November. Picking gulls and terns will tip off fishermen to their presence, and when the sand eels are especially thick, anglers frequently snag them with needlefish or diamond jigs.

Once they settle in, the sand eels won’t move too much. Unlike the schools of peanut bunker and mullet, which constantly move south—except when stripers or bluefish push them the other direction—sand eels are content to stick around in an area for weeks. Upon finding the sand eels, migrating stripers do the same.

Sand eels hang close to the bottom, and lures used to imitate them must do the same. Sinking needlefish, slim minnow-style plugs, diamond jigs and skinny soft plastics all work. Keep retrieves low and slow, with an occasional twitch.

Since sand eels rarely show themselves on the surface, look to structure to find the bait and fish. An offshore sandbar with waves crashing over is ideal. Sand eels that dig into the sandbar on the rising tide will be flushed into the trough by breaking waves and falling water, making easy pickings for stripers.

Sea herring make their appearance any time from early November to December, and can bring short bouts of intense surf fishing. Some years, the herring arrive too late, after most of the stripers have already left. Other years, they pass miles offshore, taking the stripers with them. On those years, it’s not uncommon to hear reports of massive blitzes of big bass 7 to 10 miles offshore from boats hitting wrecks for sea bass and blackfish. On those rare but wonderful years when the herring swing close to the shoreline, big stripers and blues will follow. An onshore wind will help bring the herring in close, and a rough, but clean surf will put the late-fall fish on the feed. Blue-backed poppers, darters and metal-lip plugs are great imitators of sea herring, though the best lure may be a white bucktail and white trailer. Begin retrieving the jig as soon as it hits the water, steadily reeling, adding a twitch every four or five turns of the reel handle.

Herring can move through anywhere, but beaches with deep water or inlets are more likely to see these silvery baitfish.