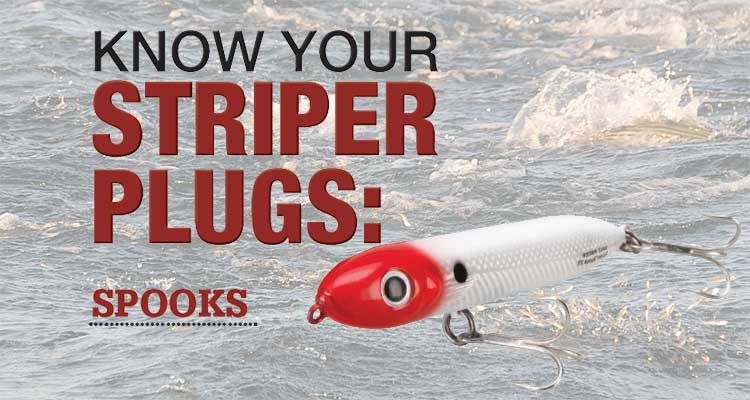 The cooling afternoon breeze had failed to materialize, making it hot, muggy and buggy. The water was equally still, and flat enough to spot a single finning bunker at 100 yards—yet there was no life in sight. Despite what seemed like an unlikely scenario to encounter a big striper, I had the perfect weapon for calling up a large fish in these exact conditions. Stickbaits, pups, walkers—this family of topwater lures goes by several names, but the most common is adapted from the most famous of these baits, the Zara Spook.

These lures were born from the end of a broom handle that James Heddon lopped off and attached hooks to in the early 1900s. The lure had a side-to-side action on the surface that became known as “walking the dog.” He called the lure the Zaragossa. Years later, when Heddon Lure Company began manufacturing lures out of plastic, they used “spook” to denote their plastic lures because of the ghost-like translucence of the material. The plastic Zaragossa was called the Zara Spook, the name that would become synonymous with this style of lure.

Today, “spooks” are made by several manufacturers in sizes suitable for everything from panfish to big bluefin tuna. They are especially effective on striped bass.

This action is best achieved with a fast-action rod held down to the side or straight up. However, if you start with a high rod angle, lower the rod as the lure gets closer to your position; otherwise, the lure will jump out of the water.

Both surfcasters and boat fishermen have great success with spooks, but when long casts are needed, pencil poppers and bottleneck poppers will cover a much greater distance.

Spooks work in all conditions when fish are active enough to feed on the surface, and they have a knack for calling up stripers on flat-calm days with no visible signs of baitfish—like that sweltering afternoon this past June.

At the tip of the jetty, I lobbed the 9-inch wooden spook into the calm surf. I began pumping the rod, first with a slow cadence, then speeding it up to create a frantic zigzagging action. When I slowed it down again, I saw a boil behind the plug. I’d gotten the attention of a striper—now I just needed to close the sale. I sped up the retrieve again and stopped it cold. A depth charge exploded under the lure and the rod doubled over. I silently gave thanks to James Heddon as the big bass sounded and my drag started to sing.

4½ inches, ½ ounce
rebellures.com
No light-tackle plug bag is complete without a bone-colored Rebel Jumpin’ Minnow. The tight zigzag of this plug coupled with the clacking lead rattle inside is irresistible to stripers. Use it in calm backwaters and coves, and be sure to work some pauses into your retrieve.

7 inches, 3 ½ ounces
gibbslures.com
The Gibbs Glider is tail-weighted to allow for longer casts, making it perfect for surfcasters. The extra weight in the back end also allows the lure to sit at a 45-degree angle in the water, making it easy to create a walk-the-dog action.

5 inches, 1 ounce
heddonlures.com
This adaptation of the original Zara Spook features beefed-up tackle meant to hold up to stripers and bluefish. The Saltwater Super Spook has a little more weight than the Jumpin’ Minnow and will work better in choppy water. It can be cast and worked on light surfcasting rods or medium-heavy boat rods.

9 inches, 3 ½ ounces
rmtackle.com
When stripers are feeding on big bunker, it takes a big topwater, like the RM Smith Jackhammer, to get their attention. This supersized wooden spook makes a big commotion, just like a big, wounded baitfish begging to be eaten.

4 3/8 inches, 5/8 ounce
rapala.com
For light-tackle backwater fishing, the Saltwater Skitter Walk is up there with the Jumpin’ Minnow when it comes to must-have lures. The Skitter Walk comes in a wide array of effective colors, and it features a fish-attracting rattle that helps stripers home in on the lure in low-light conditions.

5 inches, 1 ounce
yo-zuri.com
A ball-bearing incorporated into the tail section of the Yo-Zuri Sashimi 3D Pencil casues it to sit in a head-up position that allows it to be walked in heavy waves and rougher seas. Color-change technology mimics a distressed, fleeing baitfish. Give the lure a long pause to let the realistic color patterns seal the deal.