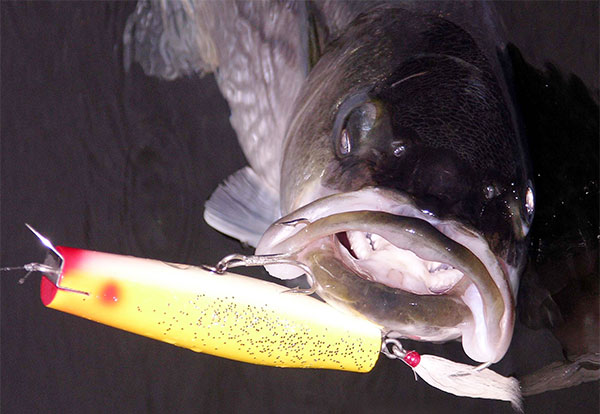 Every fisherman has an “a-ha” moment when it comes to fishing a new-to-them artificial lure. It happens at the instant when they understand, at least partially, the perfect niche for that lure. Sometimes that moment comes on the second cast, and sometimes it comes years later. For me and the Danny Plug, it took the better part of a decade.

The sinuous movement and the large wake left by a swimming Danny plug made me believe they were the perfect lure for calm waters. On days with rough water or an onshore wind, I left the Dannys at home. The plug’s shape caused it to tumble and the hooks to foul during the cast, a condition that worsened with the wind in your face. By fishing the Dannys in calm water, I caught just enough fish to let me believe I was on the right track, although I rarely caught big numbers on the plug, and I’d never landed anything of size.

One stormy night, while walking off a dark beach with a surfcaster I’d just met, I had my “a-ha” moment with the Danny plug. That night, I’d hooked a handful of stripers on needlefish and minnow plugs, but figured there just weren’t many stripers around; the other fisherman told me he’d absolutely crushed them. I had seen his light flicking on and off regularly, but was far enough away that I couldn’t see the fish. Given my own struggles at hooking fish that night, I figured he was rifling through his plug bag, as I was, trying to find a lure that would get the bass to bite.

It turned out that he’d only needed to change lures once that night. He’d started with a minnow plug, as I had, but when he noticed the bites were coming close to the beach, he switched to a Danny. Even in the strong wind, the poor-casting Danny plug reached the fish, and the big vibrations sent out by the wide-swimming metal lip got the attention of the bass in the wild surf. “The fish couldn’t resist it,” he said. “That’s why Dannys are my go-to plug for white-water.” I agreed, implying this was something I’d known for years, but in truth, I hadn’t placed a single Danny in my plug bag that night.

Danny plugs are named for their creator, Long Island luremaker, Danny Pichney. Pichney designed this metal-lip plug with a flat face and a wide body that bellied out in the middle before tapering to a slightly slimmer tail. As a result, the Danny swims on the surface, pivoting on its fat belly, causing the tail section to wag side-to-side, an action exaggerated by a dressed Siwash hook or a hookless flag.

Like most metal lips, Danny plugs can be “tuned” to adjust their action. By bending the line tie (never the lip itself), you can adjust the depth at which the lure swims. Bending the line tie up will force the nose of the plug down during the retrieve, causing it to swim deeper. Bending the line tie down will have the opposite effect. Dannys will catch fish while swimming subsurface, but these lures are at their best as a surface swimmer. When I tune them, I am generally bending the eye down in varying degrees until I find an action I like.

Many Danny plugs roll side to side during the retrieve, and for that reason, some fishermen prefer Dannys that don’t have eyes added or painted on, out of concern that an eye bobbing up and down will tip off the stripers that it’s a fake.

My first opportunity to fish Dannys in the white water came a week later. On a sandy beach, fishing alongside my friend Dave, I caught a baker’s dozen on Dannys while Dave struck out on needles and minnows. I remembered the 13-0 score—and occasionally remind Dave—because with a fishing buddy like him, that kind of outfishing doesn’t happen often. It also stuck with me because that night proved just how effective the Danny plug can be in big water, when the bass are close. On most nights when the surf is up, needles may reign supreme, but you’ll never again find me on a storm-battered beach without a selection of Danny Plugs.

Though you’d have to pay top dollar for an original Pichney Danny Plug today, a number of modern plug builders make excellent Dannys that will catch fish in big surf and calm backwaters.

Gibbs Danny Surface Swimmer
Gibbs Danny plugs come in three sizes from 1½ to 3½ ounces. These lures swim at the surface, pivoting at the fulcrum at the center of the body. 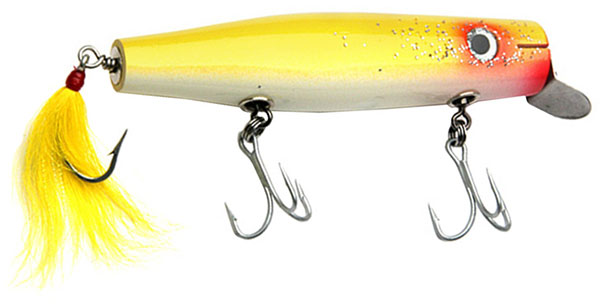 Couch’s Cedar Works Classic Danny
Bill Couch designed his Classic Danny plug with a high line tie to provide more options for fishermen looking to “tune” the plug. He also placed the second belly hook a little farther back, which causes the plug to swim in an enticing “S” pattern with less roll.

Beachmaster Danny
Though somewhat difficult to find, the Beachmaster Danny snakes across the surface, leaving a wake that stripers can’t resist, especially on the backside of a breaking wave.