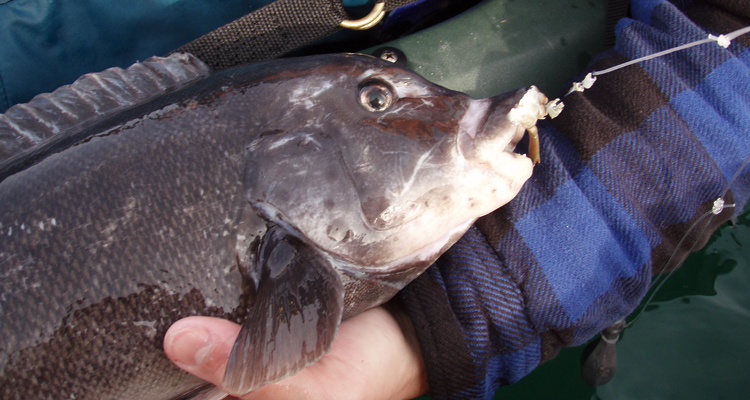 Pictured above: Rods for kayak togging must be light enough to fish with one hand, yet strong enough to haul tog out of structure.

Use a kayak to target small structure for big tog.

During the first half of fall, big tautog can be found in very shallow water on inshore structure such as bridges, piers, and jetties. Since these fish bury themselves deep into the structure, they are inaccessible to boat or shore fishermen, but kayak anglers can squeeze into the tightest quarters to drop a crab into the densest structure, right where the big tog lurk. Jigs further enhance a kayak angler’s ability to score big in thick structure by allowing fishermen to probe areas that would instantly snag conventional tog rigs.

Unlike most of our resident saltwater species in the Northeast, tautog don’t participate in long seasonal migrations. Their seasonal movements consist of short migrations from shallow to deep water and vice-versa. Tautog generally remain shallow until the water temperature drops below 55 degrees.

During the warmer-water period of the fall, bulldog tautog can be caught in depths from 6 to 20 feet. The best fishing for shallow-water trophy tog occurs as the water temperature drops from 60 degrees to 55 degrees. In fact, 55 degrees is the threshold for this pattern. As the temperature falls from this magic number, tautog begin to change location from shallow to deep water. The transition is almost always abrupt, and occurs within a time period as short as a few hours or as long as a couple of days. After this, the shallow-water bite ends and the tog migrate to deeper water where they will spend the winter.

A Game of Inches

You can always pick out a dedicated kayak tog fisherman by the condition of his kayak. The front of the kayak will be full of scratches and scrapes from squeezing into tight places loaded with sharp-edged barnacles and oysters. Tog fishermen gladly accumulate those battle scars because a distance of only a few inches matters when looking for big blackfish in the small areas where structure is piled on top of structure.

Anglers using anchors operate at a disadvantage in shallow water. Wedging the kayak between pier or bridge pilings (or using the pedal-drive to maintain your position) allows more freedom of movement to drop baits throughout the structure. Plus, constantly lifting and dropping an anchor in shallow water will spook any big tautog in the area.

While large tog are often found near piers, even bigger ones are rarely found away from the pilings. Instead, the big tog lurk under the piers and inside the pilings, nestled far away from open, unprotected water. Because of this, shore fishermen fishing vertically from atop the piers can’t get to them. The same holds true for boats. Although a boat can cast under a pier or into bridge pilings, the line settles at a 45-degree angle, making it difficult to feel the subtle taps of a big tog or maintain the leverage necessary for a solid hookset. A vertical presentation also provides a cleaner path to landing a tautog because the boating angler must pull the tautog through more structure with a horizontal presentation.

The same theory holds true for bridges. Without anchoring, an angler can hold position by wedging a kayak into any number of niches and abutments, including areas between bridge pilings and spans. Many bridges also contain substantial current breakers in the middle. In addition, there is almost always something for a kayak angler to hold onto at a bridge. However, the most important factor to remember in bridge fishing for tog is to focus on areas that can’t effectively be fished from a boat. In bridge fishing, take a methodical approach, fishing each spot for no more than three or four minutes. If you do not get a bite in that time, move on, but no more than a couple of feet. Repeat this process until you find feeding tautog.

Most importantly, take the road less traveled when targeting large, shallow-water tautog. In other words, choose locations that boat or shore anglers are unable to effectively fish or don’t know about. This often entails exploring new areas. If you follow reports, you will never be an effective big tog fisherman. Even small tautog will be removed from well-known, heavily fished areas. Due to their territorial nature, fish that are harvested won’t be replaced for a long time. So, beating the bushes for new spots is a must. Combining Google Earth with a nautical chart is a good way to scout spots while off the water. Driving or paddling the shoreline to find appropriate spots is another alternative.

Consistently catching big shallow-water tautog in a kayak requires balancing tackle light enough to set the hook with one arm with tackle strong enough to pull a quick, determined, and dogged battler out of heavy, snag-filled structure. Your fishing rod must be delicate enough to feel the subtle take, yet stiff enough to withstand the resulting shock caused by a panicked fish turning head-first into heavy structure after the hookset. It is a fine line, and there are very few rods that fit the bill.

Your fishing rod will take a beating while tog fishing. The rod will be jammed under piers, knocked against pilings, and scraped against barnacles, along with constantly being subjected to the pressure caused by pulling out snags from the bottom. It will also be exposed to the shock caused by hooking into one of the most surprisingly powerful saltwater fish in our area. After the hookset, tautog can reverse direction faster than any other bottom dweller and permanently bury itself in thick structure.

A medium-heavy Ugly Stik is a very good choice, as this inexpensive rod offers superior forgiveness while having enough backbone to wrench tog away from the structure. It is perfect for using jigs in the ½- to 1-ounce range.

The weight of your overall setup is also an important consideration in reel selection. Since you will primarily be fishing vertically in shallow water from 6 to 20 feet, it is not necessary to use a reel with large line capacity. On the other hand, smaller diameter reels could lock up when reeling in a large tog. A size-4000 spinning reel works well—it won’t lock up if you hook a big tog, but your overall setup will still be light enough to fish with one hand, even with the medium-heavy Ugly Stik.

Set your drag as tight as possible, so that the tog is unable to take line. The locked-down drag enables you to wrestle the fish away from structure after setting the hook. The resulting fight becomes an intense tug of war that will get your adrenaline pumping hard.

When fishing a tight drag in heavy structure, you must use heavy line. I spool up with 50-pound-test braided line and top it off with a 50-pound-test fluorocarbon leader. Although a large tog weighs only 10 pounds, the quick burst of raw power displayed by a hooked tog can break lighter leader like it was sewing thread.
I prefer fluorocarbon because it is stronger than monofilament and virtually invisible underwater. Tog can be surprisingly line-shy in clear water, and on some days, I will downsize to 30-pound-test leader to get bites.

Focus your effort on either end of the tide as it slows to slack. Jam your kayak into thick structure so it remains stationary, which is fairly easy around piers and bridges. If fishing near jetties, find an area out of the wind and current that is near the first steep drop-off from the jetty. Next, drop your crab straight down to the bottom, jig your bait while feeling for little nooks, crannies, and crevices, then let it sit for a couple minutes. If you don’t get a hit, reel up and drop your crab on the other side of the boat or a few feet in front of or behind your original drop. Repeat this process by moving the kayak a couple of feet away from your original location. If there is nothing to jam your kayak into, hold onto the structure with one hand and use your other hand to fish.

The toughest part of tog fishing is knowing the right time to set the hook. There are three stages to the tog hit—the nibble, the bite, and the take.

Anglers must learn the feel and visual signs of a “take” to achieve any success at tog fishing. The jig will feel as though it is floating off the bottom as the tog takes it into its mouth. Visually, you will see the line move a little. Next, you’ll feel weight on the line. At this point, set the hook as hard as possible and hang on.

After you set the hook, keep your rod raised in the same position that you set the hook and take three cranks to put line on the reel and keep the tog away from structure and off the bottom. For this reason, the first few seconds of the fight are crucial. After you pull the fish away from the bottom, the tug of war begins as you pull the tog to the kayak. During the fight, push your kayak away from structure, if necessary, and pump your rod hard to pull a big tautog away from its snagged-filled lair while keeping slack out of the line. The brief fight is extremely intense, and you will never forget the pure power of a big tautog.