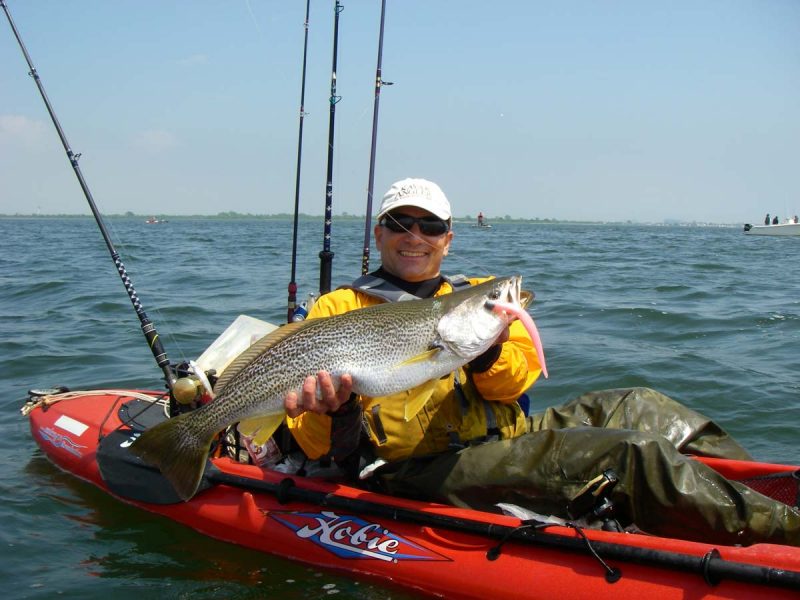 Pictured above: In the spring, weakfish feed on larger baits, so larger lures offer the best chance at hooking a tiderunner. -photo: Eric Harrison

One of the main reasons I purchased a kayak eight seasons ago was to learn the weakfish fishery around Long Island. I’ve spent extensive time targeting weakfish to learn their seasonal patterns, and have found that the stealth and precision drifting provided by a kayak makes it a deadly platform for pursuing these beautiful gamefish.

In recent years, pursuing weakfish has been a labor of love. Dwindling catches have driven most anglers to target stripers, blues, or fluke in the springtime, leaving the weakfish run largely ignored. The cyclical nature of weakfish populations makes discovering consistent patterns difficult.

To be successful at targeting weakfish these days requires some nuanced technique. Fishing from a kayak offers several advantages to anglers seeking weaks. Kayaks allow fishermen to silently cruise the channel edges adjacent to shallow flats to avoid spooking the wary weakfish. More importantly, being able to control your drift with exact precision from a kayak will keep you over tight schools of weakfish for longer periods, resulting in a higher catch rate.

There are two distinct runs of weakfish off New York and New Jersey each year, a spring run and a summer/fall run. Knowing where to look for and how to catch the weakfish during these runs will help you connect with this increasingly elusive gamefish.

When discussing the seasonal migration of the Northeast inshore triumvirate of stripers, weakfish, and bluefish, the old-timers and captains will be quick to tell you that weakfish are first in, first out. In other words, weakfish are the first fish to move inshore in the spring and the first to migrate offshore at the end of the season.

Early-season weakfish don’t feed heavily until after they spawn. The post-spawn period usually occurs around the spring striper run, but before hordes of ravenous bluefish push both stripers and weakfish off the shallow flats and adjacent channels. A gator bluefish won’t hesitate to take a chunk out of a 22-inch weakfish, and their appearance normally signals the beginning of the end of the spring weakfish run. The post-spawn fishing that occurs before the bluefish invasion is your best shot at catching a trophy weakfish. After bluefish appear in big numbers, the spawners are pushed offshore from the bays into open water.

While the spring run mainly consists of mostly larger spawning fish, a second run of smaller weakfish often takes place during the summer. While spring weakfish move in smaller groups, summer weakfish accumulate in big schools. These schools become larger and tighter as the summer moves to fall.

Summer weakfish can appear at any time from the middle of July to the end of August. Although not as many tiderunners will be caught, there will be enough weakfish in the 25- to 30-inch class to keep kayak anglers content. At the beginning of the summer run, the weakfish are spread out. As the weather cools, the weakfish begin to congregate in tighter schools over a smaller area.

In the early fall, weakfish stack up tightly in huge schools while staging to move out from inshore bays to their offshore wintering grounds. The best fishing of the year almost always occurs at this time and you will find large schools of weakfish in the 18- to 28-inch range. Although the schools are fewer and more difficult to locate, kayak anglers can experience epic fishing if a school is found. Weakfish feed heavily in the early fall in anticipation of the winter. The first big Nor’easter of the autumn—usually around the middle of October—pushes the fish offshore and abruptly ends the summer run. Some of the weakfish move south, but the vast majority winter offshore without taking long seasonal migrations.

Weakfish are generally not difficult to catch, but finding them can present a big challenge. They prefer slower-moving water than some of our other local saltwater fish. As such, you are more likely to find them in areas with soft current, far from inlets and the ocean. Weakfish will almost always be schooled up and you will often catch numerous fish if you can stay over a school, making a GPS unit invaluable to the weakfish hunter. After hooking up, mark your spot and repeat the same drift.

Sonar can also be an important tool in finding weakfish. Since they are primarily bottom feeders, weakfish rarely suspend unless they are feeding on adult bunker in the spring or peanut bunker later in the season. Their bottom-feeding nature, coupled with their tendency to congregate in large schools, translates into very distinctive marks on a fishfinder. With some experience, you will be able to easily distinguish weakfish marks from other fish species.

Weakfish schools generally remain stationary while the tide is running and you can continually catch them by retracing your drift on your GPS. For this reason, a fishfinder/GPS combo unit provides a one-two punch that gives an angler targeting weakfish a competitive advantage. Nautical charts can also be helpful since weakfish usually congregate near bottom structure identifiable on a map. Navionics mapping will allow you to work the breaklines of channels with precision if you are fishing blind.

Once you find the fish, the next step is getting your bait into the zone where they are feeding. Weakfish are a member of the drum family and a close cousin of the speckled trout. Unlike speckled trout, weakfish associate much more with deep water and structure. Down south, speckled trout are regularly caught on the flats on topwaters; for weakfish, this is a rare occurrence. Weakfish will often be found foraging on the bottom for shrimp or sea worms in deep channels adjacent to flats. You will find them in holes in these deep channels where they wait to ambush bait at either end of the tide. The change of depth is often subtle in these holes, and can be as marginal as a 2-foot drop.

Although weakfish feed on baitfish, their primary food is grass shrimp, so areas with grass shrimp are a good place to look for weakfish. Grass shrimp often congregate at the mouths of freshwater or brackish creeks. Mussel beds and oyster bars will also attract grass shrimp and weakfish.

One of the few times that weakfish will move off the bottom is in pursuit of peanut bunker. During the summer, you will sometimes see weakfish with their distinctive yellow fins pushing peanut bunker to the surface. If you observe this, the best strategy is to match the hatch. A small Rapala Rattlin’ Rap or a tin that mimics a peanut bunker, such as a Krocodile, is a good bet.

Spring weakfish are often found along channel edges or holes adjacent to big flats. Troll and cast these areas with plastics and plugs. This run-and-gun-style fishing is similar to working a weeded shoreline for freshwater bass. Continually cast and move, covering as much water as possible until you locate fish. I use a 7-foot rod for casting to weakfish, as the extra length allows for longer casts.

Spring weakfish can be solitary, but they often travel in smaller groups roaming the channel edges following bait schools. Charts like Navionics are a huge advantage in locating and casting to these channel edges. After catching a weakfish, mark it on your GPS and work that area for several more casts to determine whether you are over a school.

In general, bigger baitfish are present in the spring, so upsizing your offering can help get more bites. You will also be fishing over larger fish with bigger appetites—weakfish are aggressive feeders and won’t hesitate to inhale a plastic bait that is half their size. Pink is the favored color because weakfish feed voraciously on shrimp. Try trolling plugs such as the 5-inch Yo-Zuri Tobimaru along shallow channels to locate schools of weakfish. Although you may be plagued by cocktail bluefish, larger tiderunner weakfish occasionally feed on the fringes of the blues.

Sometimes, weakfish can be picky and may require scent to bite. At these times, I like using 3-inch Gulp Pogys. Instead of twitching the pogys, gently lift them off the bottom and allow them to fall back down. The falling jig has a fluttering tail that entices weakfish to strike.

Gulp Shrimp are another good option for picky weakfish. Use a jigging motion with the Gulp Shrimp to approximate the movement of a grass shrimp.

Near the end of a peak cycle, there can be numerous weakfish in the 30- to 37-inch class. After moving from post-spawn locations, these large fish often stay inshore for a short period of time, suspending over deep-water channels in the middle of the water column, feeding with big stripers and gator blues on adult bunker or herring. At this time, trolling a deep-diving plug such as the Yo-Zuri Sashimi Magnum Deep Diver can produce the weakfish of a lifetime.

Weakfish can be vertically jigged on metal lures and plastics during both the spring and summer run. The biggest advantage to kayak fishing for weakfish is precision drifting while vertically jigging.

Weakfish schools are usually confined to small areas. Often, there will be a large school of fish over a small piece of structure such as a mussel bed or submerged rocks. With such tightly packed schools, the stealth of a kayak is the best approach. Weakfish are sensitive to noise, even in deep water, and constantly using the motor to reposition your boat for a drift will put the fish down and kill the bite.

With a kayak, engine noise is not an issue and you can silently work the school from end to end. Additionally, the size of a kayak will allow you to work a smaller area more effectively than a larger boat. Kayaks with rudders can be easily steered to control the direction of your drift, which is difficult to achieve in a boat without using the motor and spooking the fish.

For vertical jigging, use a rod that is sensitive enough to feel the subtle take of a weakfish inhaling a falling jig, but powerful enough to set the hook in water as deep as 50 feet. I like a medium-action 6-foot, 6-inch St. Croix Triumph while vertically jigging. The rod is matched with a 3000-size spinning reel spooled with 15- to 20-pound-test braided line and topped off with a 20-inch, 15-pound-test fluorocarbon or monofilament leader. The light leader helps the jig stay near the bottom, resulting in a greater amount of time in the strike zone. If there are big bluefish around, I beef up the leader to 30- or 50-pound-test fluorocarbon.

When vertical jigging in deeper water, nothing produces better than a gold, 007 hammered diamond jig. These jigging spoons can be fished with braided line as deep as 60 feet. The added scent of a piece of sea worm can attract more strikes from weakfish.

To draw strikes, let the diamond jig and teaser sink to the bottom and slowly squid it toward the surface. It is essential to keep the slack out of your line during the drop becausehe vast majority of hits will occur as the jig falls to the bottom like a wounded baitfish or jumping shrimp. Weakfish will also pick the jig off the bottom before you begin to jig it. To detect these subtle bites, braided line provides the best sensitivity. Often, the hookset is unnecessary because the weakfish inhales the jig as it falls. You will know you are hooked up when your drag starts to scream!

Pound for pound, weakfish fight more doggedly than either stripers or fluke of similar size on light tackle. During good years, these fish can provide some of the fastest action of the season on artificial lures, and the kayak is the perfect platform for targeting them.