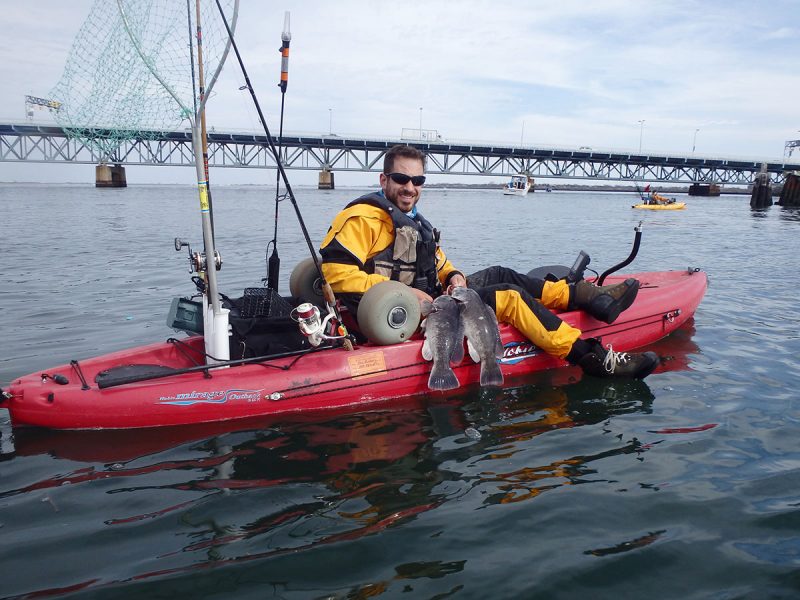 Pictured above: the author with a pair of keeper tog.

You can just about blink and miss the October Tog season here in New York. The opportunity to get them in the back bays and areas accessible by kayak is relatively short, but if you do your research and log some hours, you can find spots well inside the bay that will give up some nice blackfish, even in a howling October east wind.

Well-known blackfish spots can get fished out. They will give up keepers during the opening week of the season, but by the second week of October, many of these hotspots will produce only 13-inch blackfish. By doing your homework and finding the little rock piles and hard-to-fish wrecks overlooked by most anglers, you can continue to catch keeper tog throughout the month. Kayak fishermen are perfectly suited to find and fish these out-of-the-way blackfish havens. A kayak allows you to wedge into the tightest pilings that most boats won’t dare enter, but be prepared for scratches from barnacles and bouncing off things in rough current. It can be dangerous if you aren’t comfortable beating your boat up a bit, but this is the price of kayak togging.

Blackfish jigs have totally changed the way I fish. The simplicity of fishing with them is perfect for targeting tog from a kayak. Once I roll into a rock pile or structure with minimal current, I gently flip the jighead in front of the kayak and let it sit a few seconds. If nothing happens, I’ll give the jig a little bounce. If there is still no hit, I will bounce it back toward the kayak while retrieving slack, then pause the bait again. If I have a little current or wind pushing me, I use my Hobie Mirage Drive pedals to hover over an area that looks fishy. After I land a fish, I mark it on my fishfinder or make a mental note from surrounding landmarks.

Most of my blackfish spots are in depths that range from 8 to 30 feet of water. I carry an assortment of ½- to 1-ounce blackfish jigs by Tidaltails, which I like to rig with 40-pound-test fluorocarbon leaders and fish on medium-heavy spinning outfits. A lighter striped bass reel will usually work–I use a KastKing 2000 series Orca spooled with 30-pound-test braided line.

I never drop anchor while kayak blackfishing. I’ve tried it many times, and I can’t seem to combat giant swings in cross-currents and wind. If the current is mild enough, I can work the kayak pedals effectively enough to stem the tide; I occasionally tie up to a piling, if needed. I’m not saying an anchor won’t work, but in most cases it’s easier not to use it because an anchor is rarely effective in currents over 1 knot. You don’t have to be completely motionless to catch blackfish, but you don’t want to be flying by at 2 knots. I target areas with less current or focus my trips around slower stages of the tide. And, just like most of my fishing, I want to cover ground. Many blackfish spots may hold only two or three fish, so I find setting the anchor and positioning my kayak properly takes too much time to fish a pair of rocks or a single piling.

Outgoing tides tend to be harder to tog-fish from the kayak. However, almost all of my spots shine on incoming tides, when the current barely gets over 1 knot. Fish when the current is slow, especially if it’s your first time in an area, and pre-season scouting with sandworms is also a good idea. If you are catching species like scup and sea bass, there is a good chance the area will hold some blackfish during the fall.