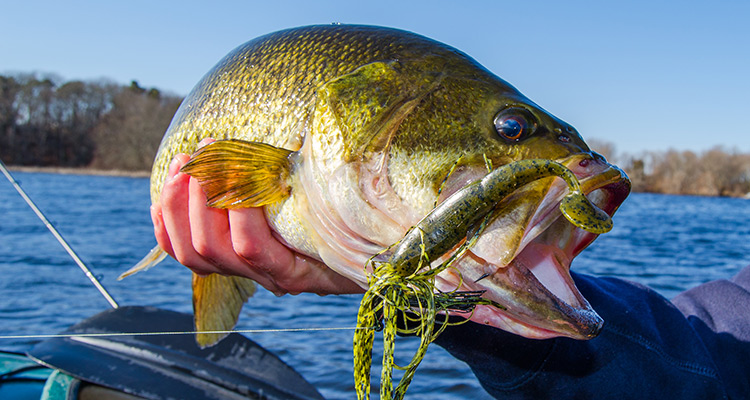 Although I fished jigs in my earlier years, I only became serious about jig-fishing after the 2001 Bassmaster Classic held on the Louisiana Delta. As a member of the press, I had been covering Kevin VanDam since 1995. In ’01, when he fished a ½-ounce black, blue and purple Strike King Premier Elite jig with a Zoom Super Chunk trailer, I really became hooked on jigs. On more than one occasion he stated, “You cannot be afraid to throw a jig into the thickest cover.” He said that “hooking” the fish is the first priority, and you should worry about how to land it afterward. VanDam also said you can expect to lose some jigs, as it’s just part of the game.

I watched KVD for six hours that day, and every time he used a jig he cast it into thick cover and around docks. Back then, he used 20-pound-test mono, and if he could not pull a fish out, he went in and got it.

After finally convincing myself that losing a few jigs was worth casting into any kind of cover, I have caught more bass over 5 pounds than I had caught my entire fishing days before using a jig. In addition, the challenge of pulling a fish out of nasty cover—like thick fields of lily pads or downed trees—is still one of my favorite ways to catch largemouths on Long Island.

Many New England ponds and lakes are relatively shallow, making the jig a “go-to” bait throughout the season—especially in the late spring and summer months when the lakes are choked with lily pads, blowdowns, hydrilla and milfoil. I can remember a day of fishing with my best friend Rick Holmberg at a shallow, cattail-lined lake. I’d mentioned to him that I had been bailing fish on jigs in the cattails. As we approached the lake, I said to Rick, “Watch this; I’m going to pull a bass out of those ‘tails.”

Rick replied, “How are you going to do that? They are only in a foot of water, if that much.”

I flipped the jig about five feet above the cattails and let it crash down through the reeds into the water. Within seconds, I had a 3-pound largemouth on the end, and proceeded to lift it out, show Rick, and quickly release it. Rick simply gazed in disbelief. 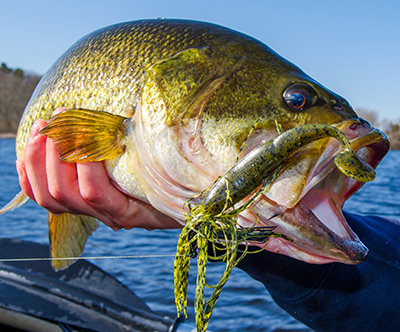 Swimming a jig through the water column is a very effective way to catch largemouth bass. To make the best one for swimming, you should modify some of your existing jigs.

Hold a jig by the head and allow the skirt to hang straight down. Use a pair of scissors and cut the skirt squarely so it extends only ¼-inch below the hook bend. Next, cut the skirt slightly on each side, angling away from the hook to make the skirt look rounded. Pair the jig with a large-profile creature bait or paddle tail and you have an excellent sunfish imitation.

For swimming a jig, I use the Abu Garcia VTC70-5 medium-heavy rod matched to a Daiwa Ballistic T3 BLS 100HS in 7.1:1 ratio, spooled with 17- to 20-pound-test fluorocarbon line. I like fluorocarbon line for open water fishing as it is more sensitive than monofilament and less visible than braid.

To swim jigs, make a long cast and reel at a fairly rapid pace, pumping the rod as you reel, causing the jig to swim in an up-and-down motion–like a fleeing baitfish. This is especially effective in the early spring and in the fall.

Although there are many jigs on the market, I opt for Strike King Pro-Model or Booyah Boo jigs in weights from 3/8- to 3/4-ounce. They both offer premium hooks, lifelike skirts and loud rattles. I always have rattles on my jigs.

Jigs come in almost every color in the spectrum, but darker colors are very successful on Long Island ponds. My top three colors for pitching to deep cover, in order of preference are black/blue, green pumpkin and black. For swimming jigs, I like the Strike King Cajun Crawfish color.

Trailers added to the jig change the lure’s profile, look, and slow down the sink rate. I match the color of the jig trailer to the jig or use a slightly darker or lighter color. I never use a black jig with a white trailer; however, I will use a blue jig with a dark blue, black or green pumpkin trailer.

Out of all jigs and trailers, I always begin with a blue jig and blue Berkley Havoc Pit Chunk. Although I have never done any solid research on my own, I have heard that crawfish take on a bluish hue, and, in spite of what most anglers believe, Long Island does have crawfish.

When jig-fishing, you can leave the spinning gear at home. I use a heavy Abu Garcia Vendetta VTC70-6 rod matched to an Abu Revo SX in 6.4:1 ratio. For standard jigging, I use 40-pound PowerPro braided line and a shock leader of 30-pound-test Suffix fluorocarbon. I tie the lines together with either a double uni or an Albright knot. After tying, add a drop of crazy glue and snip the tag ends close to the knot. I’ve never had one of these knots fail me.

Every lake will offer some form of cover to flip a jig, such as large lily pad fields, stump fields, overgrown trees and brush along the shore and mats of hydrilla and milfoil.

When boat fishing, I prefer to get within pitching distance of the pads, about 8 to 10 feet away. I toss the jig lightly toward the pads, trying to land on one. As the lure hits the pad, I slowly lift the rod tip, allowing the jig to drop between two pads and free-fall to the bottom. After settling, one or two light twitches are usually all it takes. If you get no takers, reel in, flip to another pad, and repeat. If fishing from shore or wading, the same approach is possible, but you may have to get a little closer, or really work on having the jig hit the pad as softly as possible – not splashing down like a huge rock.

While on a boat, I flip the jig into the deepest area by a fallen tree that’s close to shore. Then I lift and drop into every hole between each branch. Most of the times, the “take” will be a light tap. If you feel this, rear back and cross the fish’s eyes with the hookset. If I am on shore, I cast past the tree and swim the jig back until it hits the first limb. After making contact with the tree, I allow the jig to sink and lift, then drop it through the limbs.

When casting to cattails, I prefer to loft the jig high and allow it to crash through the reeds and into the water. I do not know what it is, but this rapid descent triggers strikes in cattails better than any other method I have tried. I use this method whether I am boating or on shore.

Working fields of hydrilla and milfoil can be done from boat or shore with equal success. While boating I prefer to drift or troll parallel to the shore in 5- to 7-foot depths. I pitch the jig ahead of the boat and allow it to sink. When it hits bottom, I impart two or three quick but slight twitches. By the time I twitch the third time, the jig will be close to the boat. I continue working in this fashion, keeping an eye on the water, looking for any holes in the weeds. These holes usually indicate a depth change or an object that prevented the weeds from growing, making them prime holding spots for bass.

From shore, casting out and slowly walking the jig back to shore works best. Make long casts, allow the jig to settle to the bottom, letting it sit still for a few seconds. You will be surprised how often a bass will hit the jig as it sits on the bottom. After the pause, a slow lift of the rod and several cranks of the reel will hop it forward. Again, allow the jig to settle and sit quietly.

New England’s freshwaters are prime places to fish jigs throughout the season, so next time you head out, bring along a few jigs and trailers and you could be rewarded with a lunker largemouth.