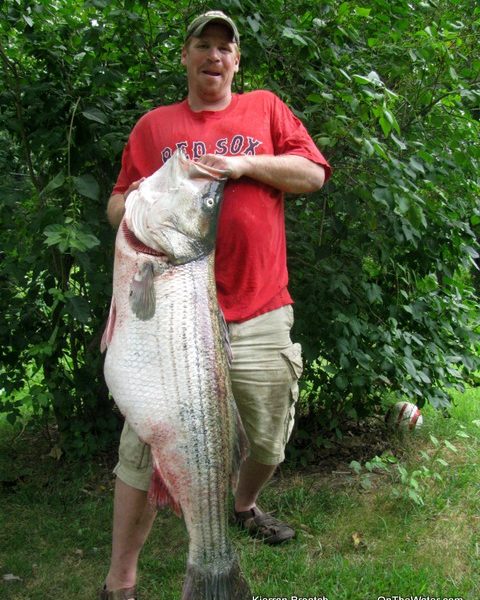 Greg Myerson’s 37.1 kg (81 lb 14 oz) striped bass record was approved yesterday morning after the IGFA’s Record Committee came to a consensus on the catch and its supporting documentation. Myerson’s catch created a whirlwind of excitement in early August for striper anglers everywhere, but especially in the northeastern USA.

“After a 15 minute fight on my St. Croix rod and Quantum reel, I got the striped bass close enough to the boat for netting,” Myerson shared in the testimony accompanying his world record application. “The fish was bigger than I thought. I slipped on eel slime and banged my ribs against the gunwhale of the boat. But it didn’t matter. The monster fish was mine. At this point it was about 8 pm, I put the fish into the hold and fished the rest of the tide. As I fished, I repeatedly peered into the hold and asked myself ‘is this striper really that big?’ The following morning, I brought the striped bass to Jack’s Shoreline Bait and Tackle to be weighed. The fish measured 54 inches in length and tipped Jack’s digital scale at 81.88 pounds. It really was that big.”

The IGFA’s approval of Meyerson’s catch marks the end of Albert McReynolds’ 29-year reign as All-Tackle record holder for this prestigious saltwater species. In addition to now holding the All-Tackle record, Meyerson’s catch also landed him the new men’s 37 kg (80 lb) line class record, which previously stood at 70 lb. Congratulations to Greg Myerson on this historical record catch – and good luck to you striper fishermen aiming to best it in the future!

Check out these photos of Greg’s incredible catch, which was weighed-in for the 2011 Striper Cup, and then read an account of the hectic morning after Greg caught the new world record striped bass.