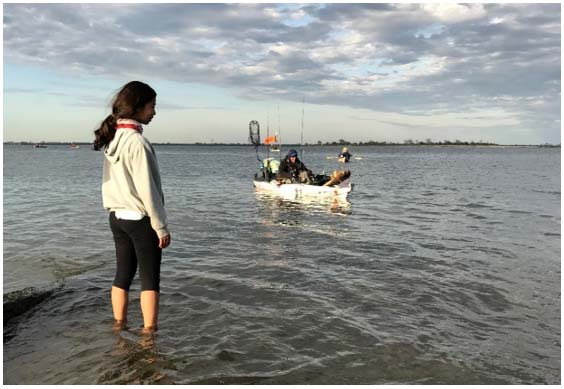 Thirteen-year-old Isabella Hong, her sister Adriana and Sasha Callaway came up with an idea to help clean up Jamaica Bay. Their efforts, and those of the Kayak Fishing Classic Tournament competitors, combined to raise local environmental awareness and in the end removed more than 1300-pounds of garbage from the waters and shores of Jamaica Bay.

Together with Kayak Fishing Classic Tournament at Jamaica Bay and sponsors, they created a contest to help reduce the amount of pollution .

I recall reading an article about how the fishes we eat have little bits of plastics in them. The smaller-piece plastics are a habitat for smaller organisms, and fish mistake them for food. Once ingested, it ends up in the food chain and eventually at our dinner table. Perhaps this is nature’s way of getting back at us for polluting the oceans. But something needs to be done. We believed that a small piece of plastic is not going to impact our future; now we have a “plastic ocean”.

My partners, Sasha Callaway (13), a great friend I’ve met through kayak fishing events, my twin sister Adriana (12), and I wanted to create a movement starting at the Kayak Fishing Classic Tournament at Jamaica Bay. The idea was quite simple: Motivate the registered members to collect as much flotsam and trash around the Floyd Bennett Field and the waters around the Jamaica Bay. We will award the top three persons who collect the most trash and help clean the environment.

Captain Jerry Collins from Captain Kayak Company in Sayville, Long Island has been the main promoter of the event for years and has generously agreed to allow us to run our little competition. Through constant emailing and calls, we have been able to secure two sponsors that are vital to our crusade. Jigging World offered the prizes and Good Start Packaging supplied us with the eco-friendly collection bags. Everything was finally set in motion, and we were quite excited to be at the tournament.

I was quite nervous the first day, standing in front of more than three hundred registered members of the tournament at the captains’ meeting. Public speaking was never my strength. Will I mumble? Will I make a mistake? Will they give us time and attention for the announcement? I do recall my father saying that some fishermen are a bit rough around the edges. I guess it reminded me of Hemingway’s Santiago, which was both concerning yet comforting. My familiarity to Santiago from his account of the test of human will against the largest fish he’s encountered made it easy for me to speak to a group of Santiagos. The announcement, for the most part, went well. I hoped that I did a decent job at carrying the message across.

Friday was the first day of the tournament. Official fishing started at noon and ended at six. In the first day, we were filled with both enthusiasm and concern. We were quite excited about making a difference, but we also worried at how much of a difference only three kids would make. We saw many kayakers walk by with their impressive fishing kayaks, but they did not stop by to take a collection bag from us. It was discouraging at first, but then, one person came, and then two. Soon, we had a group of kayak anglers coming over to our desk to ask about the rules and the prizes we’ve set forth. More importantly, many came to us and gave us words of encouragement which lifted our spirits. The anglers went out with their rods sticking out of their kayaks in hopes of winning the tournament. In addition to their tackle and rod, they brought OUR collection bags. All we could do was wait for their return, and hope, that our efforts would make a difference.

After a couple of hours playing with our friends by the camp, we went back and set our table and waited from five in the afternoon. It was a hot day. The breeze helped a bit, but the only shelter from the sun was the hat each of us wore while sitting on the table, waiting for the anglers to come back after a day of fishing. We were hoping they had a great story of how big the fish was, but deep down inside, hoping they brought even larger trash. We had some time before the anglers came back, so we decided to walk the shore to pick up some of the trash on the beach. We filled two large bags full of trash, but there was a lot more. The park had empty trash bins all around. Why did so much trash end up on the beach?

As the anglers walked past, we noticed some stop at the top of the ramp. Maybe to unzip their Personal Flotation Vests or to give their body a rest because those kayaks did seem to be heavier than they were on their way out. Then, the anglers seem to dig through their pockets and their milk crates and we saw that sight that we were so anxious to see. They pulled out a shriveled bundle of green plastic bags filled with trash and came to us to get it weighed. The individual numbers weren’t huge, but the words of support from the anglers were amazing. Those words of encouragement meant so much that we forgot how hot it was that day. Some came to us with huge bags of trash loaded on the back of their pick-up truck. We were quite amazed at their efforts. If I had to pick the most memorable moment of the day, it would have been the person who dropped off his collection but showed absolutely no interest in the prizes. He just seemed to want to do what was right. Suddenly, the bug bites, the scorching sun and the time away from the water did not seem to bother us at all.

That night, we were very excited, sitting by the camp and talking about the huge amount of trash that was collected on just day one. Again, not a mind-blowing amount but the conversations and encouragement meant everything to us.

Day two was the longest day. The competition was supposed to start at six in the morning on Saturday. Sadly, the weather did not cooperate and we had a Small Craft Advisory preventing any kayaks from venturing out onto the sea which was riddled with white caps of the waves. Everyone was grounded and we were literally under dark clouds. An hour before noon, Captain Jerry came by riding his ATV, announcing that the advisory will be lifted at noon. Once the small craft advisory was lifted, there was a mass migration of anglers with their kayaks in tow, across the concrete field and down the boat ramp. Again, we found ourselves waiting and hoping.

The time came for us to meet them when they were returning from their day of fishing. We can’t be late, we thought. We can’t miss the opportunity. We must be there at our table to weigh in the day’s results. Armed with words of encouragement from the night before, we were at our desk, making our presence known as we prepared the scale and the log book. It seemed as if more anglers arrived overnight. We saw more cars parked at the field and more anglers were coming up the ramp. Today they were in full cold weather gear as the temperature dropped overnight. We welcomed the cooler weather but cooler weather soon turned too cold and we huddled at our chairs and tried to keep ourselves busy while we waited.

We were busy trying to keep warm when we noticed an armada of kayaks coming back from their day of fishing. Then I saw something that I will never forget. Two kayaks coming to shore, each with a pair of rubber tires stacked on the bow of their kayak. There was an angler pulling out a large metal pipe filled with concrete and debris from the hull of his kayak. A kayaker’s milk crate where his tackle box gave way to plastic bottles and trash. Fishnets had Mylar balloons! “Next time, we will need some way of making collection easier,” I thought. The common fishermen stories about the one that got away was replaced with, “look what I found floating on the water” as they presented their collected trash. Trash, never have you given someone more pride!

And yet another amazing sight to see, a grey Old Town Predator kayak with a piece of wood sticking out from the bow hatch of his kayak, as well as a big piece of foam and other trash held down at the rear tank well. We all raced down to the ramp to help them unload. If we knew which cart was theirs, we would have loved to help their tired legs by bringing their carts to them as well. Never was taking out the trash more exciting for us. Day Two was better than great… it was absolutely amazing!

Since today was the closing of the kayak fishing tournament, we stayed at the desk for just one shift from ten to noon. For the first couple of minutes, no one came, but we were still eager, ready to get to work. It started small, with people coming in with their small green bags holding wrappers and empty bottles. And then the trucks came. Two trucks came, each filled with about 200 pounds of garbage! Turns outs, one of them drove all around Floyd Bennet Field, and the other went on a three-mile walk, picking up the trash that washed ashore. I was amazed at their level of participation and encouragement in helping us collect trash. They even gave up some of their fishing time to help us.

Our best experience on the third day was when my father delivered a message that an angler had said to him. He said: “I’ve never realized how much trash we have in the ocean.” Our goal was not only to reduce the amount of pollution, but to raise environmental awareness of the kayak-fishermen. We were achieving both.

Time flew, and as it came closer to 12, the official end of our tournament, anglers came in, rushing to see the final total weight of their efforts. In the end, we tallied up the scores and saw that we had collected a heaping amount of 1,336 pounds of trash.

At the end of the Kayak Fishing Classic Tournament at Jamaica Bay, we had our last captains’ meeting, during which Captain Jerry announced the winners of the fishing tournament. In the middle of his presentation, he suddenly stopped and gave us the microphone to make our announcements. It was as if he acknowledged our efforts and gave us priority before announcing the Grand Slam winners.

“Take this and run with it,” we were told. We walked with our heads held high, basking in our acheivement at Jamaica Bay. Nonetheless, deep down inside, we felt the need to go big—no, go bigger.

The task ahead is even more challenging, but as Hemmingway described Santiago’s spirit: “despite overwhelming odds against him, the old man never gives up…” Our environment is worth the fight; and neither will we.