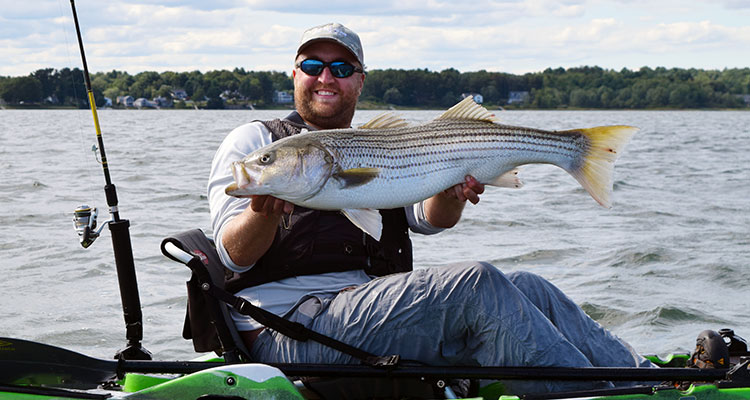 Launch into kayak fishing for striped bass this spring in a local river or estuary.

The arrival of alewives in New England’s rivers and estuaries is a sign the striped bass fishing season is about to begin. Most years, this takes place between early April in southern New England and mid-May in coastal New Hampshire and southern Maine. Start planning now, and you can be aboard your very own kayak, ready to catch the first wave of striped bass moving into the rivers and estuaries on the tails of those alewives. You’ll find there’s nothing quite as exciting as being towed by a big striped bass while sitting in an 80-pound plastic boat.

Rivers and estuaries are ideal fishing grounds for kayak anglers because access is easy, the waters are protected from weather and waves, and the striped bass fishing is often very good. There are also advantages because kayak anglers can access areas off limits to bigger boats and sneak up on shallow-water stripers without spooking them. Whether you decide to spend a little or a lot on a vessel, you can be paddling your way to a Nantucket Sleigh Ride in no time.

Sit-on-top kayaks are by far the better choice for striped bass kayak fishing. They offer stability that makes navigating currents, casting lures, and handling fish much easier than sit-in kayaks. However, sit-on-top kayaks can weigh from 40 to 90 pounds, so getting them to and from the water presents some challenges. If you plan to transport your kayak on a roof rack, choose one that is light enough to lift, or you’ll need to purchase a lift-assist rack.

In general, longer, thinner kayaks are faster but harder to turn. Shorter, wider kayaks are more maneuverable in tight areas but require more effort to paddle over long distances. Consider the areas you will be fishing, and visit a kayak dealer who lets you try before you buy.

Kayak fishing comes with its share of risks. Kayak fishing in tidal waters adds more challenges in the form of current and boat traffic. Strong currents can pull a kayak angler out of reach of a safe landing area, and heavy boat traffic creates wakes that can capsize a kayak. That said, kayak fishing can be very safe if you have the right gear and take some basic precautions.

Kayakers are subject to many of the same Coast Guard safety requirements as those using motorized vessels. While on the water, kayakers are required to have a personal flotation device (PFD) and a sound-signaling device (whistle) at all times, as well as an all-around white light and visual distress signaling device (flares) between sunset and sunrise. A PFD will help keep you afloat should you fall off your kayak, but it only works if you wear it. Other safety items include an anchor, a tall signal flag, a tow rope, and a VHF radio.

You can probably use some of the rods you already own for kayak fishing, but there are some specific characteristics that make certain rods more kayak-fishing friendly. To minimize fatigue to your arms and shoulders, choose rods with shorter handles. A longer handle tends to get in the way when attempting to work lures from the tight quarters of a kayak seat, and it prevents you from holding the reel close to your body. It won’t take long to feel the burn in your shoulders when using a rod with a long handle.

It’s best to keep your total rod length under 7 feet. The longer the rod, the more difficult it is to bring a bass in close to your kayak to land it. For casting lures, I prefer a 6-foot, 10-inch medium-action spinning rod. When fishing live bait, a 6-foot, 5-inch conventional rod is a great choice. A slightly shorter conventional setup gives me more power for landing bigger fish and keeps my catch closer to my kayak, which reduces the chance of losing a fish at the side of the boat.

Look for Structure and Current

Stripers love structure, especially rocks with water moving over them. The bass will use the current to hold behind a rock and wait for unsuspecting prey to swim past. These are great places to cast a swimbait up-current of the rocks and let it swim in front of the fish. The vibration created by a paddletail-shad swimbait makes it an excellent choice for getting the attention of a bass. The submerged rocks used by striped bass are often in water as shallow as 4 feet deep. Drifting over these fish will surely spook them, so stay casting distance away. The stealth, shallow draft, and small profile of a kayak makes it the ultimate backwater striper-fishing vessel. You can fish shallow without running the risk of damaging your boat, and kayaks cast a much smaller shadow, allowing you to get closer to the fish without spooking them.

Another favorite hangout for estuary striped bass is an eddy, or reverse current. Eddies are created by current rushing past major obstructions, such as points of land. As the current hits the point, some of the water is redirected down-current of the point and circles back around before re-entering the main current. (This is commonly seen in small coves on the edges of rivers.) Schools of baitfish will often seek shelter in the shallow, slow-moving water of an eddy. When they swim through the seam between the two opposing currents, they are often disrupted by the turbulent water and become easy meals for the bass. A good way to fish these areas is by positioning your kayak in the shallow, slower currents of an eddy, casting your lure into faster currents and retrieving it back through the seam.

The debate about which tide is the best to fish for stripers will live on forever. Yes, it’s good to know whether the bass have been feeding more on the incoming or outgoing tide, but you should also consider launching and landing. Many kayak and boat launches along the New England coast become muddy at low tide. The general rule is to avoid launching or landing from two hours before until two hours after low tide unless you are familiar with your launch site.

Strong tides can be difficult, if not impossible, to paddle against. In order to reach your favorite honey hole, you might need to time your trip with the tide. If you launch upriver from your fishing spot, paddle to it during the outgoing tide, and return on the incoming to minimize fatigue as well as the risk of getting caught in dangerous currents.

Stripers feed more actively during low-light conditions. Early mornings, evenings, and cloudy days are great times to experience a striper blitz, when bass work together to corral baitfish into tightly packed balls before exploding into a feeding frenzy. The ensuing turmoil on the surface attracts gulls and terns. Where there are birds, there is bait, and where there is bait, there are almost always bass. Be on the lookout for birds, and if you can paddle to a blitz before it is over, you will be in for some great action. If you don’t make it before the fish go back down, be patient, because they will likely surface again in the same area.

Nighttime is when many of the bigger fish are caught, because this is when they feed most actively. For safety reasons, fishing at night is best done with a friend or in groups. Drifting or trolling live eels is particularly effective in a kayak due to the fact that the big fish cruise in very shallow water at night. (I’ve caught stripers on live eels at night in as little as three feet of water.) If you’re going to fish for stripers from a kayak at night, make sure your gear is well organized and in easy reach, and don’t forget your headlamp. My biggest kayak striper was caught while fishing at night with live eels in lower Little Bay in August of 2015. It measured 46 inches long, weighed 33 pounds, and was released in good condition. That one fish will keep me chasing stripers from a kayak for the rest of my life.

Some say that kayak fishing is the fastest growing aspect of the recreational fishing industry. I don’t know if that’s true, but I meet more and more new kayak anglers on the water and at my kayak-fishing seminars every year. For some, kayak angling is an affordable way to get on the water and catch stripers. For others, it’s an obsession that costs them countless hours of sleep and hundreds, if not thousands, of dollars. Regardless, most kayak anglers are friendly and helpful. If you see another angler on the water, don’t be afraid to paddle over and pick his or her brain for ideas on gear mounting, storage, or fishing tips. You’ll usually find fellow kayak anglers to be more than happy to help. Before long, you’ll be answering the same questions for someone else.