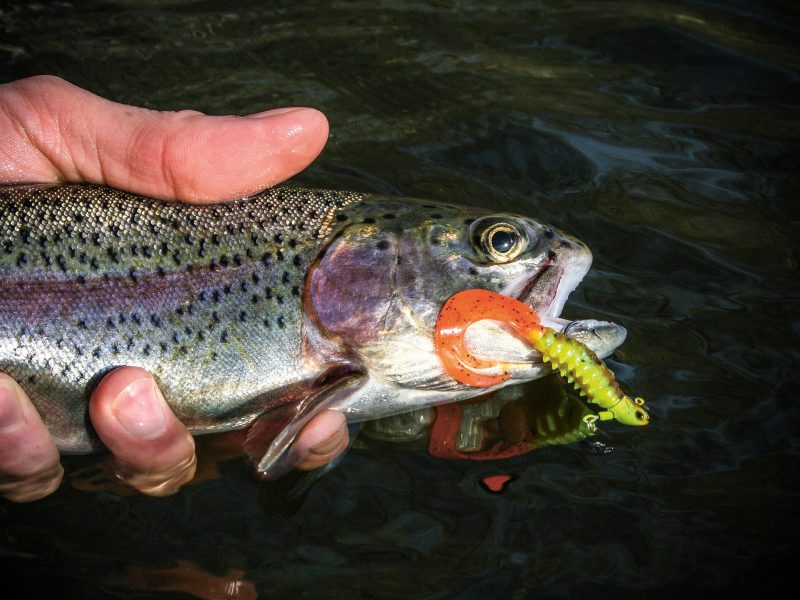 While recently pondering one of fishing’s most often uttered hypotheticals, “If you could use only one lure…,” a review of my logs made my choice an obvious one: a curly-tail grub. One entry after another had “grub” scrawled in the bait column. I never really gave much consideration to the fact that I always had a grub tied to at least one of my rods while fishing. Even more telling was my frequent choice of rigging grubs of assorted sizes on multiple rods. Several of my photographs confirm that grubs were responsible for many of my catches—and some quality ones as well.

Grubs are simple to use and can be presented in a variety of tantalizing ways. A grub is one of those baits that you just can’t fish wrong—no matter what type of retrieve you use, there is always a possibility that a fish will take interest.

One of the most fascinating elements of grub fishing is the variety of fish that respond to these lures. Even bottom-dwellers such as catfish, carp, white suckers, and creek chubs will attack a grub as it passes through their zone.

My experience has taught me that you must do a bit of experimentation to find the best technique for presenting this simple bait in different areas and with different target species in mind.

I begin with a swimming presentation, steadily retrieving the grub to allow the tail to kick like a fleeing baitfish. When the swimming technique finds no takers, it’s time to slow things down and bounce the bottom. This technique can be enhanced by using a grub that floats. By using this technique, you may find that a fish ingests your grub while it was just sitting there. The next attempt you make to move the bait may result in a bent rod tip and a thrashing fish. Or, a combination of swim and pause motions might be necessary. Simply swim the grub for a few feet, then allow it to gently fall to the bottom. Be sure to keep a tight line so you can detect subtle strikes as the bait descends.

When positioned over a school of suspended fish such as crappies, you just can’t beat the vertical presentation of a curly-tail grub. Just drop it into the pack and watch the action begin. Keep the grub slightly above the schooled fish, add a few subtle rod tip twitches, and let the crappies do the rest. Additionally, if vertical appears to be the order of the day, then you might also want to consider threading a grub on a drop shot rig. The subtle motion of a curly-tail grub presented on this rig can trigger strikes when the bass are hanging near the bottom.

Since most of my grub fishing is designed to catch any and all varieties of fish that swim in the lake or river, I tend to keep my grubs on the small side, 3 inches and under. Much like the differences produced by variations in retrieve, the size of the grub can make a big difference in your success on a given day. I vary the size and retrieve of my bait until I find the best combination.

One more element to add to this equation is color. You can’t go wrong with natural colors such as green pumpkin, motor oil, or watermelon. There are times when “louder” colors like chartreuse can stir their interest as well.

The Origin of the Curly Tail Grub

Curly tails have become commonplace enough to be taken for granted by modern fishermen. When they were first introduced in the 70s by Mr. Twister, they were a game-changer.

Soft plastics found their origins in the late 1950s and early 1960s, with small worms and grubs being molded from rubber. The stiff rubber used, as well as the basic shapes produced, did not allow the flexible action and effectiveness of modern soft plastics. In 1967, Tom Mann introduced the Jelly Worm, the first of the modern-era soft-plastic baits. They came in colors named after fruit, like grape and strawberry, with matching scent added. They are still being made today.

According to The Curly Tail – An Angling Innovation (a story written for the November/December 2015 Issue of On The Water by Tom Schlichter), the inventor of the Curly Tail, Ric Welle, got the idea for the original Mr. Twister at a fishing show in 1972, where he noticed a French-made lure that looked like an eel with a curled tail.

It was a huge lure for the time, about 8 inches long, made of stiff rubber. Welle reduced the concept to a 4-inch size, kept the curled tail, and poured the lure using soft, pliable plastic instead of rubber.

Today, the Curly Tail continues to thrive as part of the Mr. Twister brand and in the product lineups of almost every soft-plastic lure manufacturer on the planet. 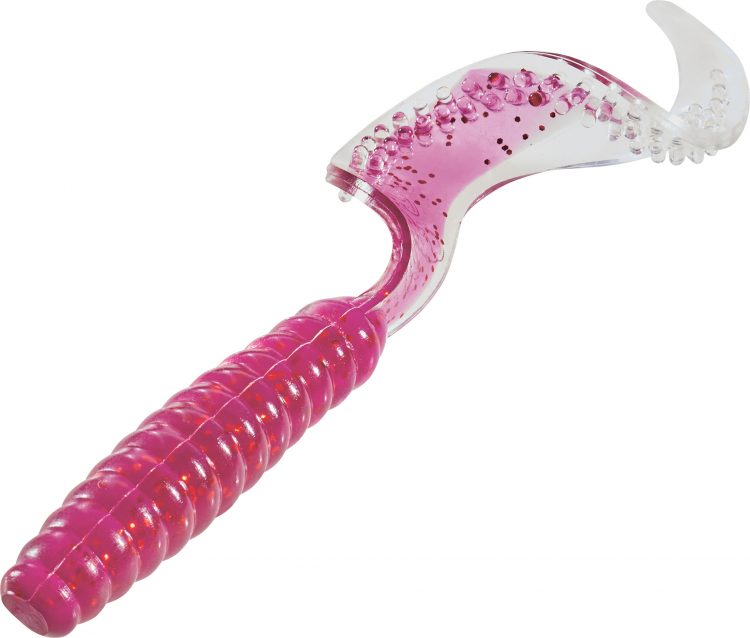 The Platinum Curly Tail produces a tight swimming profile for exceptional vibration. Individual rows of raised ribs on its tail use hydrodynamics to produce a streamlined swimming action. The thinner profile means the Platinum easily works deeper waters for walleye and smallmouth. 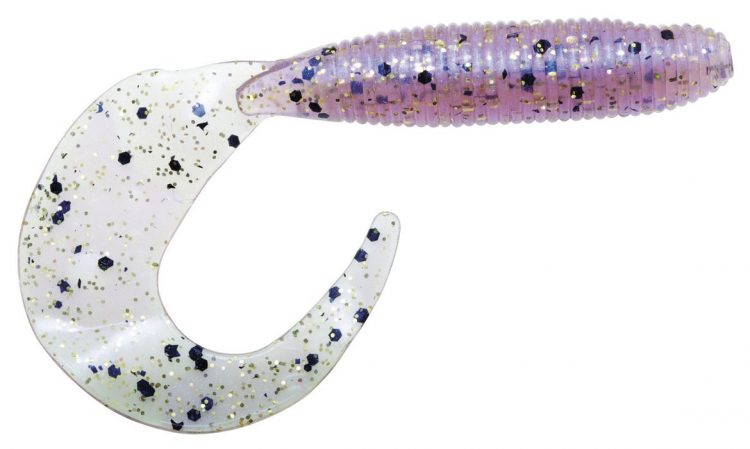 The Z-Man GrubZ features a tear-resistant ElazTech plastic and incorporates an ultra-thin tail with tantalizing action, even on ultra-light jigheads. 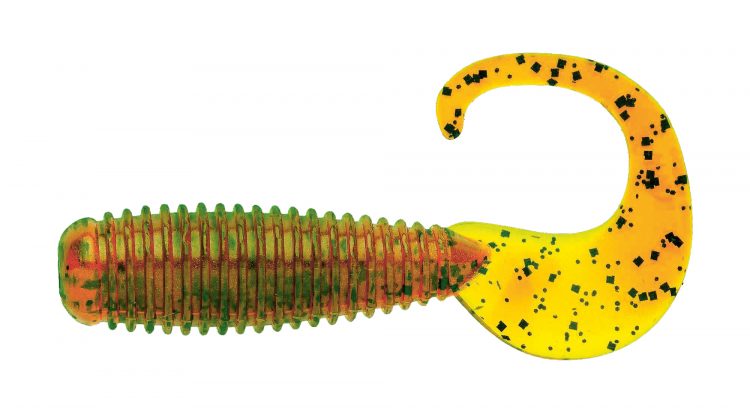 The extra curl or compound curve at the end of the Monkey Grub’s tail is designed to create more water resistance so the lure swims higher in the water column on slower retrieves. The large-profile, ribbed body adds bulk to swim jigs and spinner baits, but also fishes well on its own when rigged on a plain jighead. 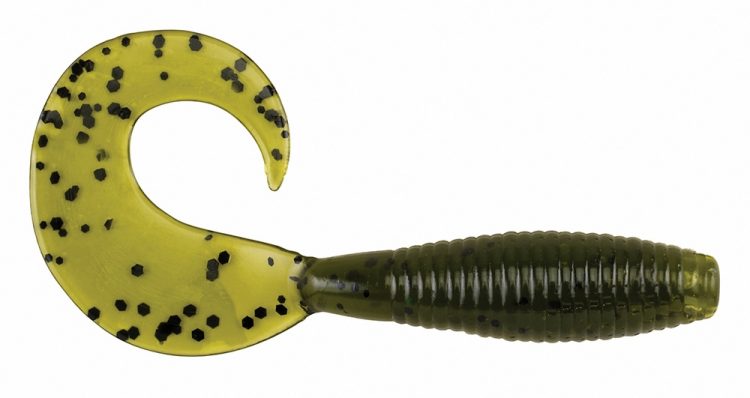 [Article: How To Find and Catch Brook Trout]