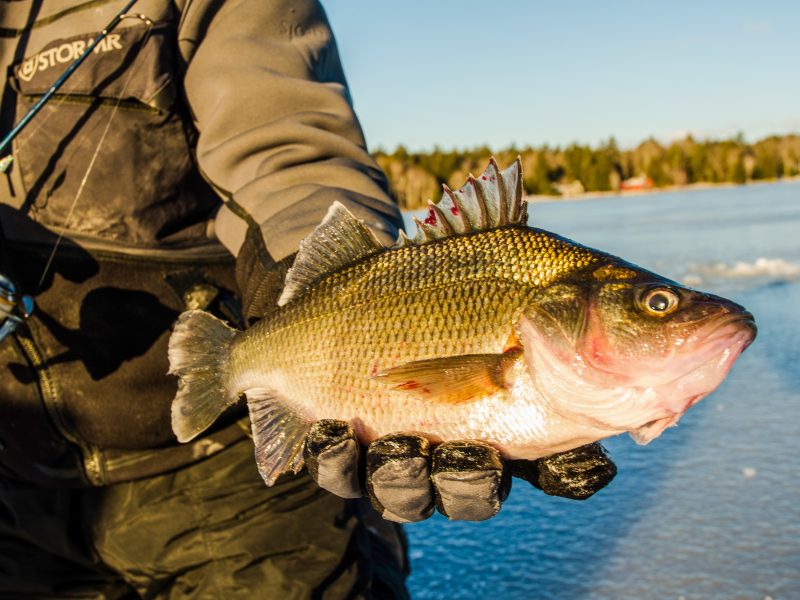 Black ice, the clear ice that first forms usually in December, without snow on top, combined with clear water and brilliant sun above, means that silver shiner scales reflect light under tip-ups, and that jigged silvery spoons do the same. When black ice has formed in December, it is usually the result of a cold front that has passed through, causing the mercury to dip and the sun to shine bright through the thin, frigid air, indicating a start to early season ice fishing.

The fish react to cold fronts the same in winter as during spring, summer, and fall. They move into deeper water and/or more deeply into cover and go off the feed. But silver flashes can lure them out of cover. They strike, not necessarily in hunger. Bass will sometimes actually run five or ten yards of Dacron off a tip-up spool and then drop a shiner under these conditions. These silvery beacons are deadly. They draw strikes. And perhaps for pickerel, reaction quickly produces need to consume, hunger or not.

➤ Ice Fishing After the First Freeze

East of Lake Champlain and south to Mid-Atlantic States, the only two native freshwater contenders of gamefish status are brook trout and chain pickerel. Both largemouth and smallmouth bass originally were introduced, as other species have also been. Brook trout have a stable reputation, but the chain pickerel is perhaps the most ambiguously valued freshwater gamefish, native or not. In Florida, professional guides knock pickerel dead with baseball bats and toss them over boatside when they interfere with bass fishing. Even in our home range, the preference tends to be much more in favor of bass and trout – until the lakes and ponds freeze over. Then suddenly the status of pickerel is resurrected for another winter season.

Bass fishing can be excellent under early ice, but a long, cylindrical predator coming through a hole in the ice gratifies in a subtle way. Pickerel more and less fit 6-inch-diameter holes. Also, pickerel tend to feed more in ice water and orient themselves slightly shallower than bass.

From this fairly slight difference between two species that often share habitat, a whole world of fishermen’s preference for pickerel through the ice emerges every winter, even though plenty of pickerel can be caught early and late in the day in summer heat. I think it’s good that pickerel at least get this winter credit, and that they really deserve more.

Pickerel need aquatic vegetation. They thrive among the open hook’s nemesis, and a small part of why they are disliked is because of this stubborn attachment to green mess. Usually, pickerel are more and less solitary; always they are ambush predators, but not always from in, or under, weeds or lily pads. They love to sidle up to submerged branches. Sometimes they appear to be another branch. On occasion, they will be in such cover without any weeds nearby. I’ve even caught pickerel on the Delaware River among large, weedless rock agglomerations. But to spawn they need weeds somewhere in the shallows of a given body of water. 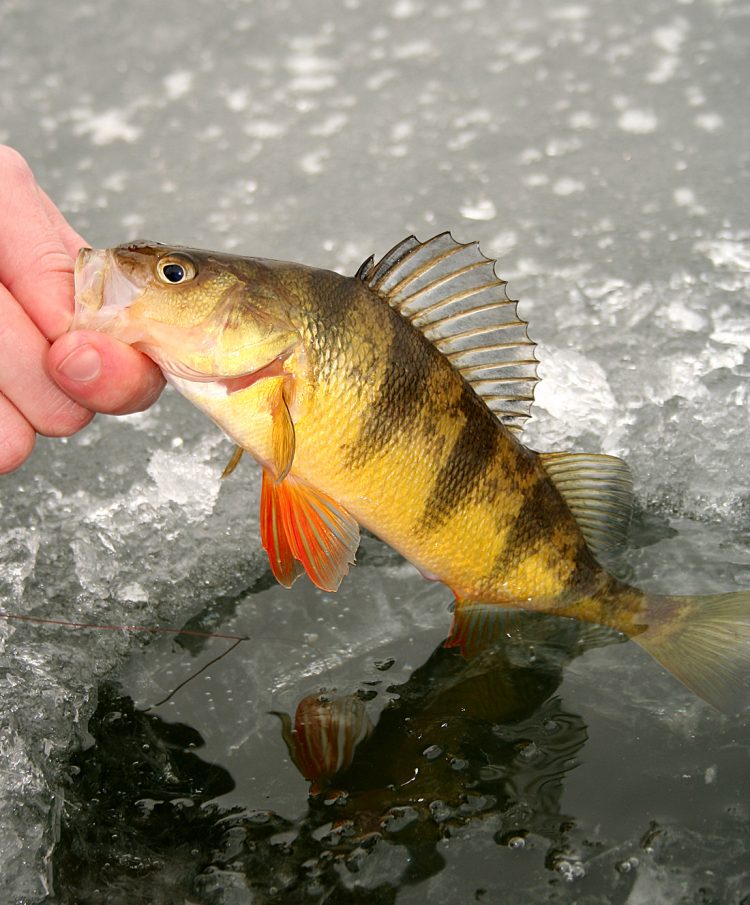 Eutrophic lakes and ponds, or similar slow-moving streams such as weedy canals, are home to pickerel. But oligotrophic reservoirs with just enough fertility to host some weedbeds can produce gator-length chains. So can shallow impoundments and reservoirs also with limited ranges of weed beds. Very shallow tannic bogs, as well as deep sandpits with aquatic vegetation, host pickerel. Everywhere in the Northeast, pickerel are close to home and relatively underfished.

Another important need for pickerel, especially very large pickerel that can reach the 7-pound range and possibly larger, is an abundance of soft-rayed forage. With sizable acreage for roaming room and plenty to feed on, pickerel easily average 2 pounds. Ferocious with that mouth full of razor-sharp teeth, pickerel are opportunistic feeders that grow fast when the conditions are excellent.

Taken on hook and line and placed on the dinner table, they ironically reveal a mild taste. This white meat is suited for dipping in hot butter. Most fishermen release their catch because of the Y bones of the back, but there are ways around getting a point in your own throat.

First comers to ice fishing, and there are more of us in recent years, are best advised to wait until about 5-inches of hard, clear ice covers the lake. A safety rule is to stay in the coves until ice is very thick. Carry a spud bar whenever exploring a new area of ice to smack at it well ahead of walking, for assurance while judging the thickness of the ice’s underside. Cut a number of holes and measure the thickness to get a definite idea of what about 5 inches of black ice looks like. A lake does not necessarily freeze evenly. Wind conditions make for uneven freezing. So do discrepancies of depth; deeper water cools slower than does shallow. In some cases, underwater springs keep ice in an area thin.

Always wear ice spikes on a lanyard around the neck. Should ice give way beneath feet, it’s nearly impossible to get out of water without some way to grip ice. Bare or even wet gloved hands on slippery ice have resulted in unnecessary deaths. 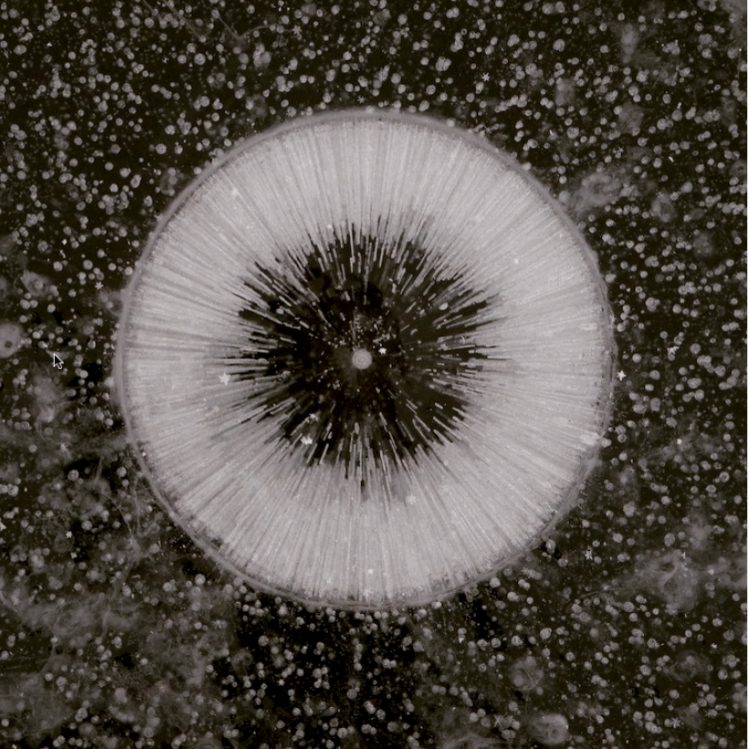 An equipment sled can be fashioned with an old Flexible Flyer or the like. Buy a durable plastic tool tub from Home Depot or Lowes, possibly a local hardware, and strap it very tightly to the sled with heavy-duty stretch-rubber hook straps. Commercially produced ice-fishing totes also exist. On a good, long-runner sled with wood platform, a graph recorder mount can even be attached if you want to be fancy. When fishing deeper water this device may be helpful. Just wet the ice surface and apply the transducer.

Either a power or hand auger may be necessary later in the season. But so long as the physical demand is not too much, a simple split bar can take on 8 inches of ice. No doubt using a split bar warms the body fast, and so does a hand auger. But the obvious advantage for a power auger when ice is thick is the convenience for cutting new holes.

Spool tip-ups with 40-pound-test Dacron. Their heavier bulk is best for a good grip. Twenty-pound-test, 30-inch fluorocarbon leaders are sufficient, and never forget to check a leader after catching a fish, particularly a pickerel. If it’s nicked at all, either cut it with clippers and tie on a new size-6 Mustad or replace the leader. Tie a double loop at the end of each leader opposite the hook, and simply tie the Dacron directly to them with a uni-knot. Place a medium split shot a foot above the hook. It’s not a good idea to use more than 20-pound-test for leaders because the stiffness inhibits the shiner’s movements. But any less than 15-pound-test fluorocarbon runs the risk of being cut directly through.

Jigging rods without the super-sensitive panfish tips allow a more sure control over a range of small silvery spoons. Eighth-ounce jigs tipped with a smaller shiner are deadly. Use 10-pound-test monofilament since braid may freeze in an instant and be cumbersome, but be careful playing fish. Sharp ice in the holes can break monofilament.

Don’t forget pliers or a hemostat to remove hooks. Ice cleats can prevent broken bones when the ice is slippery after a slight melt and refreeze. Food, a hibachi or a propane stove, fold out chairs, a wind shelter, and certainly disposable hand and foot warmers all fit snugly in the sled.

➤ Where to Ice Fish

As a general rule, set tip-ups over 6-to-15 feet of water to take advantage of sunlight streaming through black ice. A few lakes don’t even have 6-feet of water. A case in point is New Jersey’s Lake Musconetcong, with 5-feet of water virtually everywhere. Fifteen feet may seem too deep for pickerel, but so long as there’s some vegetation at that depth, pickerel will lurk in and among it, especially large ones.

However, I’ve caught big pickerel in a very shallow cove of New Jersey’s Lake Hopatcong, a lake with vegetation as deep as 16-feet. In that cove, the 3-feet of water meant that I had to wrap fluorocarbon leader on the tip-up spool with not a foot and a half of it extending to the shiner below the stanchion. The key to action that day seemed to have been a faintly deeper channel about a hundred yards out from the closest shore point.

When fishing black ice without snow, choose a lake with clear water. If you can’t fish crystalline depths, it’s a good idea to try to fish in shallower waters. We’re lucky if we get this black ice condition in any given ice season, so take advantage of the reaction factor.

Fish weedlines, especially where combined with fallen timber or other cover. It may be all but impossible to judge weedlines exactly unless you know the lake from warm water months. But if tip-ups are set approximately, that’s ok bass and pickerel are not geometric mathematicians and are fairly spread out among vegetation. It’s better to set baits and/or to jig spoons over residual green than it is to work clean bottom any further than about a yard from weed or cover edge. Know how deep weeds grow.

The range of possibility – bass here, pickerel there, and possibly everywhere, means that tip-ups should be wisely spaced widely apart. I like to get some exercise running to a distant flag; I space my tip-ups about 100-feet apart. This means that along a straight shoreline, two guys fishing would have over 3 football fields of fishing, but a loose zig-zag pattern would break this down a bit. And usually a cove or weedy flat is not sharp with drop offs, so other figures, such as squares, can keep the distances between all ten tip-ups or more much shorter. Squares may break the weedline rule, but they figure perfectly for covering a weedy flat.

First ice means easy cutting. Leave the auger at home and tote a split bar. Advantage can be taken by opening more holes than you have tip-ups. Move those around some. On occasion, break the ice forming inside holes you’ve set and lift the tip-up chest high and set it back unless you feel resistance. Sometimes the shiner finds weeds that need to be cleared. And if not, sometimes a pickerel nearby suddenly becomes interested in the motion. Pull a tip-up and do some jigging. Most ice fishermen are content to cut holes, set tip-ups, and wait. But even under a frozen lake, fish can effectively be sought after.

Submit your ice fishing photos using the Instagram hashtag #OnTheWaterMagazine, or email them to feedback@onthewater.com.

Ideally, there should be nothing random about the approach. It’s best to know the water before it’s fished. That way there is a basis for whatever intuitions are received in real knowledge. Unless you actually know something about where you are, intuition is crazy.

For us humans the joy of actually succeeding upon so subtle a guess, and even having some notion of why we thought there might be a fish where we opened a fresh hole, is a triumph of the spirit and intelligence that we feel with special acuteness. We are human beings abandoned from the Garden, so to speak, and yet to have unified the mind with the environment and got a physical result, a fish, makes us right at home with nature.

➤ On The Water Social Media