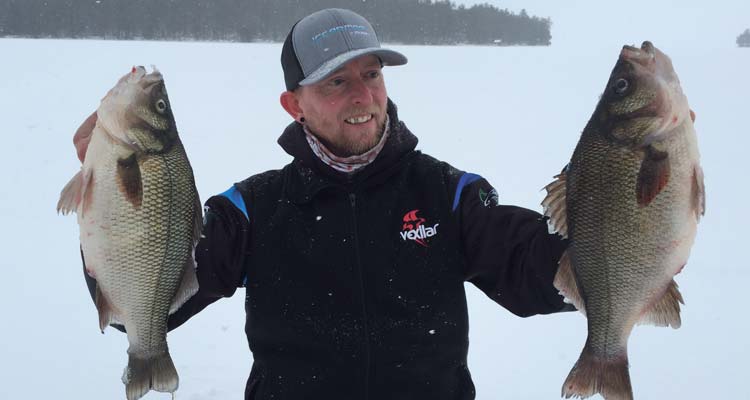 The striper’s smaller cousin blitzes under the ice all winter long.

White perch can be found in fresh waters throughout New England. Sebago Lake in Maine and Lake Champlain in Vermont both hold huge numbers of whites. New Hampshire’s Lake Winnipesaukee is well known for regularly producing white perch heavier than 3 pounds. The current Massachusetts state record, a 3-pound, 8-ounce beast, was caught in October 2016 in Wachusett Reservoir. White perch not only seem to be increasing in size, but also in popularity due to their size, strength, and flavor.

Despite their name and appearance, white perch aren’t perch at all. They are members of the temperate bass family, just like the striped bass. White perch are brackish-water fish that first migrated into the Great Lakes during the construction of the Erie Canal. They are considered invasive in some parts of the United States because they are prolific breeders and prey heavily on white bass and walleye eggs. White perch travel in large schools and feed aggressively during the winter, making them a prime target for ice-fishermen looking for fast action with hard-fighting fish.

White perch are typically easier to find in smaller ponds because they feed on plankton and small baitfish, both of which congregate over basins during the winter.

Larger lakes are more challenging due to the amount of real estate and the nomadic lifestyle of the white perch. While the fish sometimes take up residence in certain areas, they will move if the weather, fishing pressure, or baitfish patterns change. The key to finding white perch in large water bodies is to figure out what they are feeding on and where that food will be. If you find the food, you will almost certainly find the white perch.

Target basins, inside turns, and along steep breaks that lead to inside turns. Start in 30 feet of water and work shallower until you find fish. In smaller ponds, the basins might only be 15 feet deep. In that case, start in the deepest area and work your way into shallower water until you find them. Expect the fish to be suspended, but that isn’t always the rule.

White perch will try to trap bait in the basin and gorge themselves. When they succeed, they will stay there for hours, providing consistent, often furious action. When the bite slows, all you need to do is wait a few minutes for the school to cycle back around, but don’t wait too long. These schools are constantly on the move, so if the bite dies off for more than fifteen minutes, make a move to another area, such as another basin or inside turn.

The perch will also use inside turns to their advantage. The entire school will work together to corral baitfish and push them into the turns, much in the same way striped bass do. Once the perch have a school of bait in a tight ball, they will go into a feeding frenzy, which often attracts other fish, such as lake trout. If they can, the perch will reorganize and repeat the process until the bait moves on.

If you can find fish in an area where a steep break starts as a point and leads to an inside turn, you might be in for some of the best white perch fishing there is, especially during the last hour of daylight when whites feed most aggressively. The perch will push bait toward the break, which forces the baitfish to filter out to the safety of shallow water at the inside turn.

Lake maps, such as the Navionics Boating App, will help you locate key underwater structures such as breaks, basins, and inside turns. You can also mark waypoints and track fish movement. You will learn a lot about what areas white perch are frequenting. Make use of digital lake map technology and you will catch more fish.

White perch feeding patterns change throughout winter. First, ice is fun because oxygen levels are high, whites feed regularly, and less chasing is necessary as the schools move through the basins. During midwinter, decreased oxygen and colder water will cause white perch to become sluggish and to feed less aggressively. You will go from catching 25 to 30 fish per trip to less than a dozen, but don’t worry; once March rolls around, the fishing heats back up.

As daylight increases, the snowpack will begin to melt and precipitation will start falling in the form of rain rather than snow. Rain and runoff are oxygen-rich, invigorating the white perch. Longer days and higher oxygen levels also tell these fish that it’s almost time to spawn. In mid-March, white perch will feed more aggressively than at any other time of the year. Some-times, the fish bite all day. Avid winter white perch anglers wait all winter for this late-season action since the fish are bigger and there seem to be more of them.

Regardless of the time of year, early morning, late afternoon, and cloudy days are always going to be your best bet. On cloudy, rainy, or snowy days, the whites will sometimes bite continuously. On sunny bluebird days, focus on the hours around dawn and dusk, and be prepared to do a lot of moving around during midday when the fish are less active.

Mobility, efficiency, and a properly matched rod and reel are important factors when fishing for white perch; sometimes, they are even more important than lure color. Since white perch are nomadic, they can be there one minute and gone the next. You must be able to move quickly and often—only bring what you need so you can move quickly when the fish do.

Ease, mobility, and efficiency are all key elements to finding and catching white perch, but staying comfortable enough to remain on the ice long enough to find the fish is essential, which is where easily-transported shelters come into play. The Clam Outdoors Fish Trap Scout XL and Dave Genz Legend Thermal are two great one-man shelter options that will increase mobility and efficiency by letting you stay light, keep all your gear in one place, and quickly get out of the elements. Your auger, heater, rods, and flasher will easily fit inside the tub, allowing you to move from hole to hole and stay on top of the fish as they move.

Two or three 26- to 28-inch light- or medium-light-action rods with 4- or 6-pound-test line will suffice. Having multiple rods allows you to tie a different jig onto each line so you can cycle through your set-ups until you find the one that works best, rather than re-tying every time you want to switch jigs. It’s important to get your jig back down to the fish to keep their attention. The lighter your line, the faster your jig will drop down to the fish, which is important when the perch are on the move. If you go too light, however, you will spend most of your time fighting one fish while the rest of the school swims away.

Electronics play a vital role in finding and staying on schools of white perch. A Vexilar sonar flasher will allow you to pinpoint specific depths and show you where the fish are in the water column, in real time. For instance, if the perch are suspended 12 feet off the bottom in 40 feet of water, your Vexilar will instantly show you that, saving valuable time and keeping you catching fish rather than looking for them. You can also use the Vexilar to read how the fish react to your jig—the mood of the fish, as we say. Most importantly, when the school moves on, you will know it. At that point, the trick is to figure out which way they went and follow them.

Knowing the forage in the water you are fishing is important when selecting lures. You can get an idea when you fillet your catch by checking the stomach contents. A number twelve white/orange and white/red Epoxy Drop from Clam Pro Tackle tipped with a small piece of worm is one of the most effective lures, especially when the perch are feeding on plankton and bugs in small ponds. Sometimes, the whites are keyed in on smelt and won’t eat anything else. This is when the epoxy drop really shines, because you can tip it with a small smelt and get it down to the fish quickly. When the perch are feeding on baitfish, or you need to get your jig back down faster, a 1/8-ounce white Blade Spoon or similar lure tipped with worm works great.

Be sure of your state’s regulations, as they differ throughout the Northeast. New Hampshire only allows a single hook and a single hook-point with bait when ice fishing, so either clip two points off the trebles or change out the hooks with size 10 Siwash hooks.

Jigging cadence is important, because every lure is designed to produce a certain action. Vary your cadence until you find what works and stick with it until it doesn’t attract bites anymore. Sometimes, the flash or vibration of a jig or spoon ripped through the water column will call fish in from a distance. On sunny days when fish can see well, take advantage of the available light with something shiny. On cloudy days or in stained water, when fish are relying more on their lateral line system, use a lure that displaces more water.

Anglers sometimes refer to “pounding the bottom” to entice perch to bite. This involves ripping the jig a foot or two off the bottom and letting it freefall back down, repeating the process a few times. This creates a cloud of silt as though a dobsonfly or mayfly nymph were rising out of the substrate, and will almost always trigger bites from finicky fish. If a school appears to be thinning, or suddenly disappears from the screen of your Vexilar, try dropping your jig to the bottom and pounding it a few times. Then, lift it a foot or two off the bottom and resume your normal cadence.

On most days, an angler with the right gear and know-how can catch 20 or so white perch. On an exceptional day, you may catch as many as 100. Stay mobile, efficient, and keep it simple, but be willing to think outside the box and try new lures or techniques. White perch are similar to striped bass—sometimes they will hit a lure they have never seen before with a vengeance. Always pay attention to changes in weather and fishing pressure, as these always have a significant impact on white perch locations and behavior.